Read on for UFC 192 prelim results 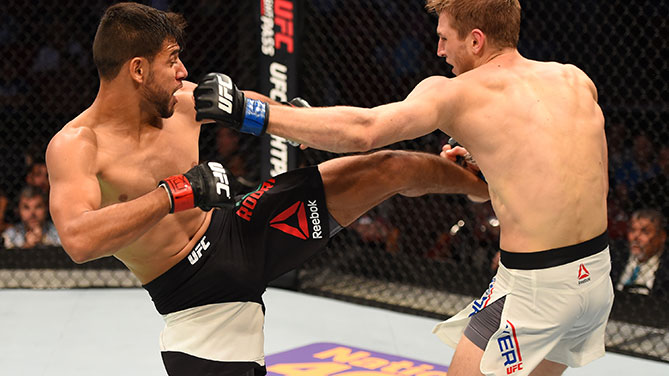 Scores were 30-27 twice and 30-26 for The Ultimate Fighter Latin America winner Rodriguez, 7-1, who appeared to break his right foot in the first round. Hooker falls to 13-6.

After a tentative opening from both fighters, Rodriguez began upping his work rate in the second minute, with a variety of kicks being delivered upstairs and down. Hooker tied Rodriguez up with a little over two minutes left, but ended up being thrown to the canvas. Rodriguez initially took control from the mount position, but Hooker adjusted well and rose to his feet, keeping “El Pantera” locked up against the fence for much of the remainder of the round.

Rodriguez emptied his tool box in the second round, showing off a wide variety of striking moves while standing and even some slick ground work. Hooker had a tough time figuring out his opponent, but his chin held up under the assault and he kept moving forward, even if he wasn’t scoring enough to slow Rodriguez down.

Hooker got a takedown early in round two, but it was Rodriguez doing the bulk of the scoring, cutting the New Zealander with an elbow. Hooker stayed on top and added some points with his ground strikes, but as the clock ticked down, referee Kerry Hatley stood the fighters up and had the Octagonside physician check Hooker’s cuts. After the bout resumed, there was little time for either man to make a final charge, leaving the verdict in the judges’ hands. 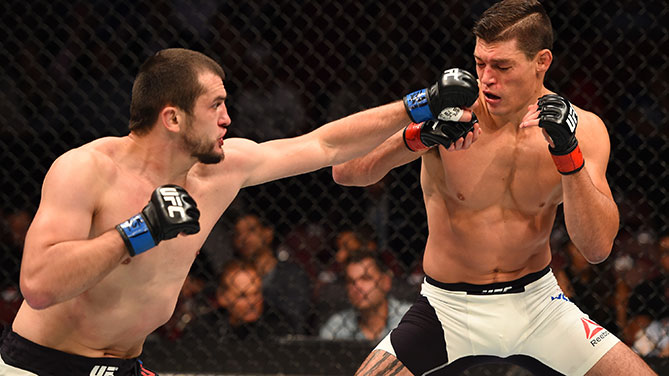 In a meeting of surging welterweight prospects, Albert Tumenov delivered an ultra-impressive effort against Alan Jouban, stopping his opponent in less than a round. The Nalchik, Russia native wasn’t as impressed.

Tumenov started strong, throwing Jouban to the canvas and also landing with hard strikes upstairs. That’s usually the signal for Jouban to kick things into gear, but Tumenov’s counters were sharp and flush, and with a little over two minutes left, a partially blocked right kick to the head jarred Jouban. Tumenov followed up and didn’t let the Louisiana native off the hook, with a left to the head dropping Jouban face first to the mat. Referee Frank Collazo waved off the bout right then and there. The official time was 2:55. 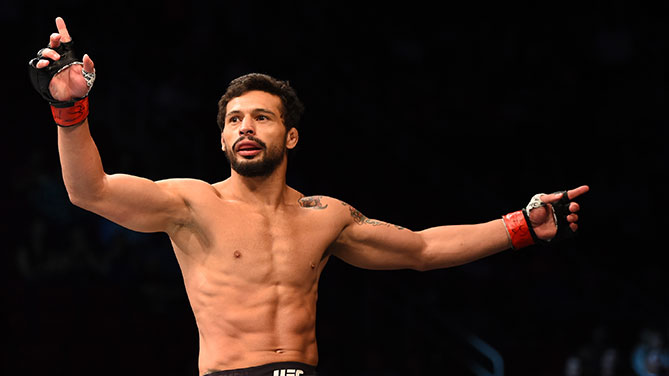 Russia’s Islam Makhachev had impressed fans and pundits en route to a perfect 12-0 record, but Brazilian veteran Adriano Martins was apparently too big of a step up at this point in the promising lightweight’s pro career, as Martins scored a one-punch first-round knockout.

Makhachev closed the distance easily, landing hard shots as he moved forward. Martins took a little while to get into his rhythm, and in the second minute, he found it, with a single right hand dropping the Russian hard to the deck. Referee Frank Collazo stepped in immediately to stop the fight, with the official time at 1:46 of the opening stanza.

Manaus’ Martins, who has now won three straight, ups his record to 28-7. Makhachev falls to 12-1 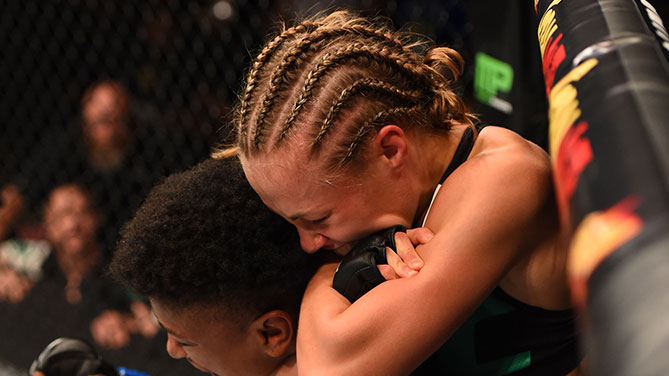 Finally back in the Octagon after a long layoff following her December 2014 loss to Carla Esparza, strawweight contender Rose Namajunas made short work of her Ultimate Fighter 20 castmate Angela Hill, winning by first-round submission.

“Patience was the key in this fight, and I got the win,” the 23-year-old Namajunas said.

After some solid stand-up exchanges to kick off the bout, Namajunas took Hill down with a little over three minutes left, and as Hill tried to get up, “Thug Rose” took her opponent’s back and sunk in a tight rear naked choke. Hill held out as long as she could, but there was no escape, with referee Joe Solis halting the bout at the 2:47 mark.

With the win, Milwaukee’s Namajunas moves to 4-2. Maryland’s Hill falls to 2-2.