"There are a lot of fighters that I like to face, but right now I'm just thinking about Rob Kimmons. I'm not trying to look past anybody." 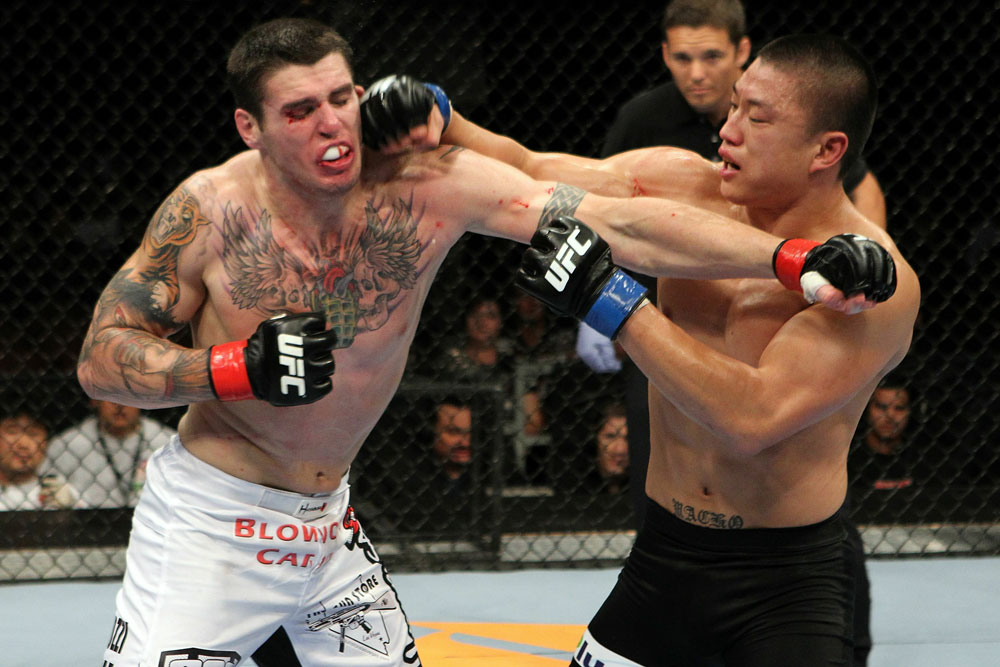 On the eve of his second UFC fight, Dongi Yang has been relaxing in Louisville, Kentucky, fully intent on seizing opportunities that are not as readily available in his native South Korea.

“I like the fact that you can drink tap water anywhere in the US. In Korea, you usually can't, you have to boil it first, or just drink bottled water,” observed the 26-year-old member of Korean Top Team, who counts Chan Sung Jung (Better Known as “The Korean Zombie”) among his teammates.

Speaking through a translator, his manager Brian Rhee, Yang discussed myriad topics, from Thursday night’s battle against Rob Kimmons at UFC on Versus 3, to his admiration for Mike Tyson, and the incredible sacrifice he has made to impress the ladies.

Q: Would you like to make a prediction for your fight with Rob Kimmons?

Yang: I believe that Rob Kimmons may just get KTFO. I just learned that expression from my manager today.

Q: How much weight do you cut for your fights?

Q: Louisville is not exactly known for its kimchi, a favorite Korean delicacy. So if you do eat kimchi in Louisville, where will you get it from?

Yang: Unlike most Koreans, I actually don't really eat much kimchi. Despite the fact that I do hold a lot of weight, I'm usually very strict with my diet. I try to avoid foods that are too salty, processed, complex carbs, etc. So, the whole kimchi issue is moot for me. Plus, the garlic makes your breath smell and it keeps the ladies away. And I like to keep the ladies close.

Q: You call Mike Tyson your hero. How many of his fights did you watch when you were younger?

Yang: I saw all of his fights, I think. I usually watched them at home with friends. I liked the fact that Tyson was such a dominant finisher and, despite the fact that he was a shorter fighter, he still destroyed all of the bigger, taller guys. He was such a force of nature.

Q: You are a teammate of Chan Sung Jung. He has become somewhat popular in the U.S., perhaps South Korea’s most popular import in the sport. Describe Chan Sung Jung as a person and his influence on you.

Yang: He's a really nice kid. He works hard and he's really sincere. In Korea, like I mentioned, Confucian relationships are very important, but as a younger teammate, he is still very humble despite his recent prominence in the sport.

Q: The mixed martial arts have not seen a lot of top fighters using hapkido techniques. You have a black belt in Yong Moo Do and hapkido is one element of the discipline. Have you ever used hapkido techniques in a live professional fight?

Yang: I don't know if I could say that I've specifically used any hapkido techniques in any of my MMA fights, but the background and the basis of the hapkido have definitely helped my game.

Q: Tell me about your life growing up in South Korea.

Yang: I was born in Seoul, Korea. My parents owned a restaurant. So, I grew up in a pretty average way and when I was 17 a friend of mine showed me a MMA video and that's when I got hooked. I started when I was in college, but it was when I went to do my military service (all able-bodied Korean men are supposed to serve in the military) that I realized that MMA was something I really wanted to do. So, as soon as I got out of the military I started training hard.

Q: As far as popular culture, what are some of your favorite American movies and musical artists?

Yang: There's a lot of American culture in Korea. I like American pop music, all different kinds. I liked both the "Transformers" and "Transporter" series'.

Q: In your opinion, who is the best fighter in South Korea today – at any weight class?

Yang: I think there are three guys who are really top guys: Dong Hyun "Stun Gun" Kim, Chan Sung "The Korean Zombie" Jung and Hyun Gyu "Ace" Lim. I'm sure more UFC fans know the first two, but "Ace" is a guy that a lot of people wouldn't have heard of. He's my main sparring partner at Korean Top Team. He's a middle weight but he's dropping down to welterweight now. He's really tall with a long reach; he's built like an orangutan, and he's just super talented all around. I hope he makes it to the UFC soon!

Q: Talk about your split decision loss to Chris Camozzi in your UFC debut. How was that experience for you? What lessons did you learn from that defeat?

Yang: Since it was my first fight in the UFC, it definitely helps to get out the jitters. I don't really have any regrets about the fight. It motivated me to prepare that much harder for this fight.

Q: You beat Pawel Nastula, a former judo gold medalist from Poland, by TKO. Do you consider that the biggest win of your career?

Q: Besides Rob Kimmons, are there any other pro fighters you hope to someday fight?

Yang: There are a lot of fighters that I like to face, but right now I'm just thinking about Rob Kimmons. I'm not trying to look past anybody. I just really want to stay in the UFC. President White, are you listening?