With a career that includes the greatest fight in WEC history, the first Twister submission ever seen in the UFC, and eight post-fight performance bonuses, it’s hard to choose just five defining moments for “The Korean Zombie,” Chan Sung Jung. But we gave it a shot before his April 9 challenge for Alexander Volkanovski’s featherweight title in the main event of UFC 273.

Time dulls some memories, but not this one. If you haven’t seen the first fight between Jung and Leonard Garcia in the WEC, click that link above right now and then come back. I’ll be waiting for you. This may have been one of the greatest introductions to a fighter we’ve ever seen, and while Jung lost a split decision to Garcia that night in Sacramento, this fight was so good that the result really didn’t matter. Seriously. And when it was over, a legend from South Korea was born.

“When I was fighting Garcia, I couldn’t hear anything because of the roar of the crowd,” Jung recalled. “I just heard the roaring sound. That’s when I thought, it’s very cool that I’m here. And even though I lost, I think the Korean Zombie was born. I exist because of that fight.”

It wasn’t the “Fight of the Decade” like their first bout was, but Chan Sung Jung made a good case for earning Submission of the Year consideration after he finished Leonard Garcia in the second round with the first Twister submission in the history of the UFC. See post-fight interview

The featherweight bout was a rematch of the April 2010 war in the WEC that saw Garcia win a close decision over “The Korean Zombie”.

It only took around a minute for the two friendly rivals to warm up and start getting into it, with Garcia taking an early lead thanks to a thudding right punch to the head. Jung stood back, looking to counter, but Garcia continued to land the cleaner shots, bruising his foe under the right eye. With under two minutes left, Jung took Garcia to the mat, and there he had more success, landing a series of ground strikes as he easily won the positional game on the ground.

The pace was more measured in round two, with each fighter cautious about getting into all-out exchanges. But just as in the first round, it was Jung finishing strong as he was able to work Garcia over on the mat in the final minutes, and with time running out, he sprang into action, locking in the Twister submission made famous by Eddie Bravo that forced Garcia to tap out at 4:59 of the second round.

“I came out a little too wild,” said the classy Hominick, now 20-10. “I don’t fight that reckless. But I just wanted to get it done.” See post-fight interview with Hominick

After a quick touch of gloves, Hominick went on the offensive, but after missing a wide left hook, Jung fired back with a vicious right hand that dropped the Canadian. A barrage of shots followed, and referee Herb Dean halted the bout, a call the fans of the Ontario native didn’t particularly care for.

If South Korea needs an MMA superstar, they have found their man.

“The Korean Zombie,” as 25-year-old Chan Sung Jung is affectionately known in the sport, choked out Dustin Poirier in the fourth round Tuesday night to cap a thrilling UFC on FUEL TV main event at the Patriot Center that was certainly Fight of The Night and which stands a strong chance of being one of the most entertaining scraps of 2012.

“I want to thank all the Korean fans and the Korean community that came here to support me today,” the exhausted featherweight said after winning his third straight. “He had me in trouble at the beginning of the third round. The thought of giving up was in my head but I just kept going.”

While Poirier began to take control in round three, repeatedly cracking a barely-able-to-stand Jung with hard left hands, it was Jung (13-3) who delivered in most other moments of the fight. He jumped on Poirier early, catching a kick for a takedown and immediately cutting Poirier’s forehead with an elbow strike. Typically relentless in his attacks, Jung suffocated Poirier (12-2) with pressure and punches and takedowns in the second, even dropping the highly-regarded Louisianan with a punch. The crowd chanted “Zombie! Zombie!” as he ravaged the “Fightville” documentary star with flying knees and threatened with deep armbars and triangle chokes.

After Poirier’s resurgence in the third round, it was proper to wonder if Jung had enough in his tank to survive and keep from squandering his lead. But he put any such thoughts to rest in round four by rocking Poirier with punches and then finishing him on the mat with a D’Arce choke, ending the bout at the 1:07 mark and leaving the wondering to center on what’s next for the charismatic Korean warrior, who fights in the mold of an in-his-prime Wanderlei Silva but also has a fearsome ground game to go with it. 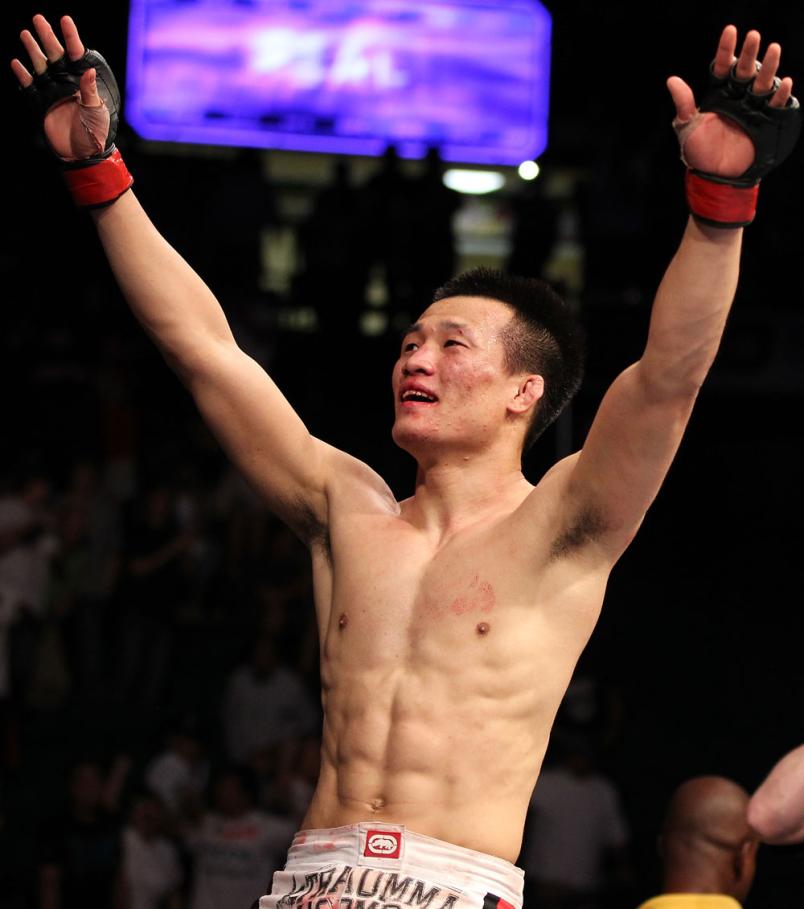 Chan Sung Jung reacts after defeating Dustin Poirier in a featherweight bout during the UFC on Fuel TV event at Patriot Center on May 15, 2012 in Fairfax, Virginia. (Photo by Josh Hedges/Zuffa LLC)

Fighting at home in South Korea for the first time since 2008, Seoul’s Korean Zombie, Chan Sung Jung, thrilled his fans at Busan’s Sajik Arena, stopping Frankie Edgar in the first round to put himself squarely in the featherweight title race.

Jung patiently waited for an opening as the fight began, and after he avoided a takedown, he found it, stunning Edgar with a short left upstairs before dropping the former lightweight champion moments later. Jung moved in for the finish and took Edgar’s back, and while the New Jersey native was able to stay active enough to avoid the finish and get back to his feet, the bloodied battler was still on unsteady legs, and after a second knockdown, referee Marc Goddard had seen enough. The official time of the stoppage was 3:18 of round one.