"I study my opponent, prepare
for him the best that I can, and get out there and perform to my
abilities and pray and hope that that’s enough to win the fight." - Chad Mendes 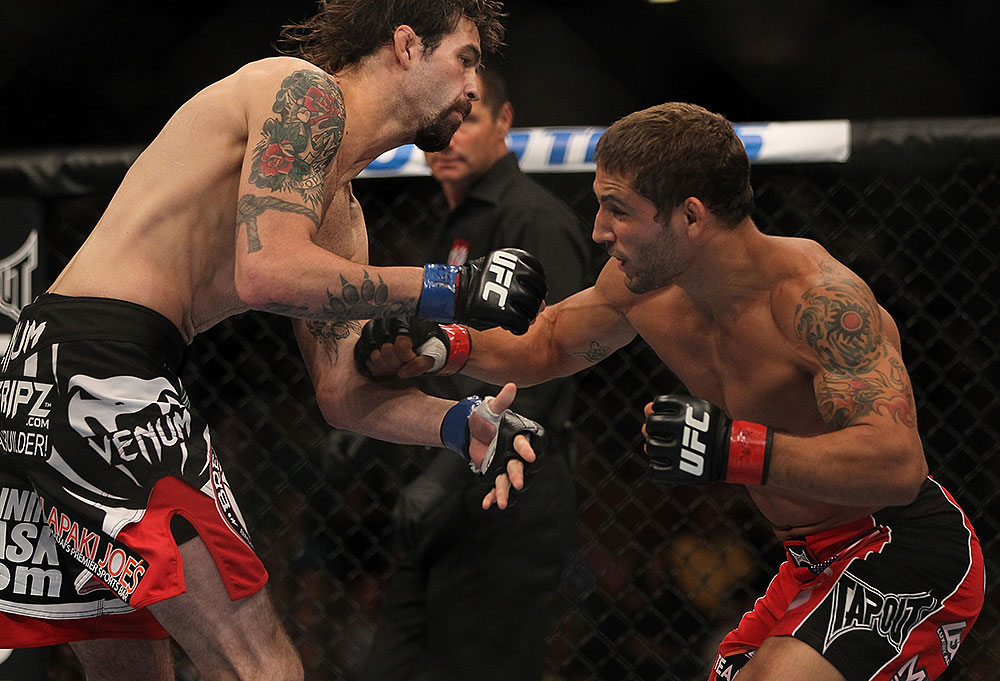 There is no truth to the rumor that UFC featherweight contender Chad Mendes sent a roll of bubble wrap to the gym of Darren Elkins in the hopes of keeping his opponent healthy for their Saturday bout in San Jose, but if it was true, it wouldn’t have been surprising considering what Mendes has been going through over the last few months.

First, a December matchup with Hacran Dias was scratched due to injury just days before the bout, with Yaotzin Meza being called in to replace the Brazilian. Mendes wasn’t so lucky in February, when Manny Gamburyan was a late scratch for a UFC 157 bout and no one else was willing to step up to face the Californian on short notice. Even this weekend’s fight with Elkins wasn’t Mendes’ original plan, as Clay Guida was slotted across from him until “The Carpenter” pulled out due to injury. So if Mendes is a little skeptical about someone other than the referee being in the Octagon with him on Saturday night, you can sympathize.

“It’s tough,” he admits. “I’ve got two houses, a family, and if I’m not fighting I’m not making any money, so I’m in here busting my butt, going through a whole camp, and people are dropping out and no one wants to fill in. It’s frustrating. This is our job, it’s what we do for a living and it’s sad to me that people don’t want to fight. Especially someone that’s closer to the top. That’s a chance for them to possibly beat me and get right in there. I don’t know why they would just pass it up.”

Elkins, just a month removed from his UFC 158 TKO of Antonio Carvalho, didn’t pass up the opportunity, leaving Mendes with a quality foe for Saturday’s bout. And at this point, “Money” is just hoping he shows up.

“I’ve just been praying and hoping this guy stays healthy,” laughs Mendes. “My fingers are crossed.”

So what does a late switch do to a fighter? The cliché is that each athlete is focusing on himself and not his opponent, but it’s got to wreak some sort of havoc when it comes to game plans and style matchups.

“It’s definitely tough, just because I like to watch my opponents a little bit and try to find out their tendencies and see the stuff that they do on a regular basis through fights and where their strong and weak points are,” he said. “And I don’t completely change any training for anyone, but I do like to implement some different types of training into the stuff I already do, depending on my opponent. So it’s hard when you go through a camp training for one style and one person, and maybe two weeks to a week before that gets switched up. So basically last minute, you gotta try to basically figure out a new game plan and look at their style as much as possible and try to come up with something as quick as you can. It definitely doesn’t make the job any easier.”

Especially with an opponent like Elkins, who has traveled under the radar for a while now, only to emerge with a five fight winning streak in the UFC that has him currently unbeaten at 145 pounds. He’s not sneaking up on Mendes though.

“I think Darren is a very underrated fighter and a really tough guy,” he said. “He’s got a great chin - I’ve seen him take some very, very heavy shots - he’s got great cardio, decent wrestling and decent boxing. He’s kind of a grinder and that’s basically my style as well. I feel like that’s why I’ve been so successful, because that’s a very difficult style to deal with for a lot of people. So I think this is a great matchup for me, I wish he had a little bit bigger name at this point just because of how tough he is, but it is what it is, and I think this is a great fight for me.”

For Elkins, the upside of the fight is obvious. If he beats a former number one contender like Mendes, he’s an instant player in the title mix. That’s the type of pressure any fighter craves, while Mendes’ pressure is of a different sort. In order to get back into a title fight, he has to win impressively as he sports a bull’s eye on his back, something that has been there even dating back to his days as a two-time Division I All-American wrestler at Cal-Poly.

“I think it’s just something I’ve kind of gotten used to,” he said. “Growing up wrestling, I’ve always been one of the top ranked guys each year in my weight class, so it’s like coming into the season and you have that target on your back. It’s something I’ve just learned to live with and deal with and accept that’s the way it’s gonna be. I don’t think anything directly of it and think ‘oh man, I’ve got to go in there and win this fight because I have a target on my back.’ I basically take it one fight at a time, I study my opponent, prepare for him the best that I can, and get out there and perform to my abilities and pray and hope that that’s enough to win the fight. And for the most part it has been every time, and I’ve got to keep doing that.”

And after back-to-back first round knockouts of Cody McKenzie and Meza after his title fight loss to Jose Aldo in January of 2012, this grinder turned knockout artist seems to be handling things pretty well heading into yet another big fight that he hopes to get done with early.

“I love it,” said Mendes. “It’s so awesome to be able to go out there when you train a full eight to ten weeks and bust your butt in the gym, and you finally get in there and make quick work of it within the first round. It’s definitely something I wish I could do every single fight and it’s something I’m aiming to do.”