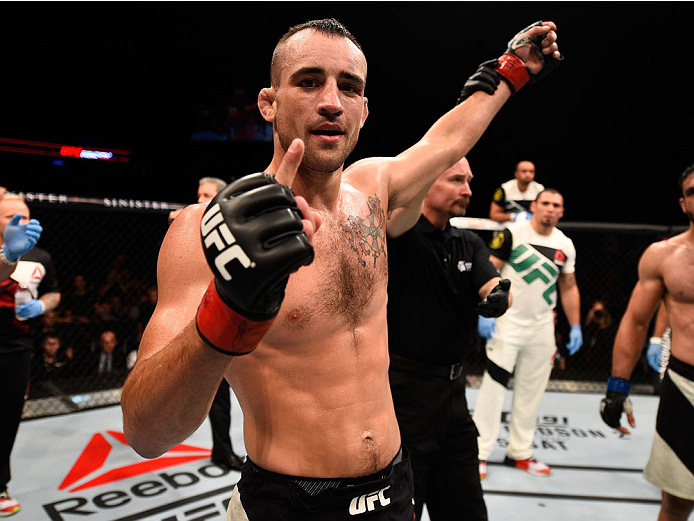 Like most UFC fighters, Shane Campbell has been in the fight business much longer than his two Octagon fights would indicate. But just looking at the Canadian’s overall record, one can easily ascertain what the UFC matchmakers saw in his potential, despite losing his debut appearance to fellow Canadian John Makdessi before bouncing back with a win over Elias Silverio last summer.

“Shaolin” says he’s more ready than ever for this fight since moving training camps and getting out of the bitter cold of his former home in Edmonton, Alberta, Canada.

“I was living in Edmonton and it’s cold as hell there,” Campbell said. “When I was living there it was minus 40 nearly all winter and my idea was to move to California to try either Alpha Male or Kings MMA, which are two top camps, and of course California has better weather. But David Lea (Toshido MMA) brought me up to spar with Matt Dwyer one day and it just clicked with me so well that I made the decision to stay in Canada and move to Kelowna, British Columbia.

“I’m constantly improving,” he adds. “My striking has always been high level even before I went into MMA, and I’ve been working the ground game a lot. But if I can say anything has improved as of late, it would be that making my move to Toshido MMA, I’ve been working a lot more on my ground game and I can see the difference in where I was just a year ago to where I am today.”

Ane even more important than the nuts and bolts of technique, Campbell said finding the right gym with the right coaches and training partners is key to motivation.

“You have to get in where you fit in, and if you’re not motivated at one gym or another, in this sport you have to be able to train every day, and even if your coach is phenomenal at what he teaches, there has to be some chemistry there,” he says. “David Lea and I have a great friendship and most of David’s students he trained from the beginning, and I’m a more of a seasoned veteran having come to him as a world champion in Muay Thai and kickboxing and MMA, so we are more partners when it comes to my training.”

That isn’t always a good thing, however. Most of the criticism leveled at UFC legend BJ Penn was that he was always the boss of his camps, and if you’re the boss, sometimes people around you will simply agree with you, even when you’re wrong (Penn has recently made the move to Jackson’s MMA for the next chapter in his storied career).

“Well, I’m no better in that regard,” Campbell said, admitting to running most of his own training schedule. But he draws the line on the comparison right there.

“I’m not the most disciplined or organized person in the world and I may add a life coach just for all around mental well being in other aspects of my life, but training is easy for me, it’s my passion.”

Since training at Toshido, Campbell says his ground game has improved the most and he’s hoping to add a few “phenomenal submissions” to an already knockout-filled highlight reel. Plus, he thinks in the topsy-turvy world of mixed martial arts, anyone, anywhere could be called up for a big fight, which could lead to a title shot sooner rather than later.

“Especially with my ability to get insane knockouts,” he says. “And now with my ground game I can throw in some good ground work and maybe some crazy submissions here and there, but I’ve had 100 fights in my career. If it comes a time where I crack the top ten or if I get injured and can never fight again, I will still be in the sport in one way or another. If people want to call me a journeyman fighter, that’s okay with me.”

Campbell sounds more martial artist in his philosophy than prizefighter. He says just preparing for fights, one sees growth in one’s own skills if you’re doing it properly. That is always the silver lining – win or lose.

Which brought us to the question of young Sage Northcutt, a fellow lightweight who suffered a submission defeat on national television that had many of his peers calling him out on social media.

Campbell was not one of them.

“Look, I wanted to fight Sage Northcutt because he had so much hype going in and I saw a lot of weaknesses in his game, but hey, he’s a young kid who took on a lot of fights really quick and he’s never said a bad word about anyone as far as I know,” he said. “All the talk about him is everyone else doing it. He doesn’t talk himself up ever. It’s a tough game, especially with all the attention he gets, but it’s not his fault. This is a constantly evolving game and yeah, he clearly didn’t have the defense to understand what was going on there, but you don’t just become a jiu-jitsu black belt in two years. Look, if you look at every fight and think you’re going to win them all, you’re a bit naïve. You might get a padded record and pad your bank account, but what kind of fighter would you really be?”