The highly unofficial awards season continues with the biggest knockouts of 2022 and how we saw them on fight night ... 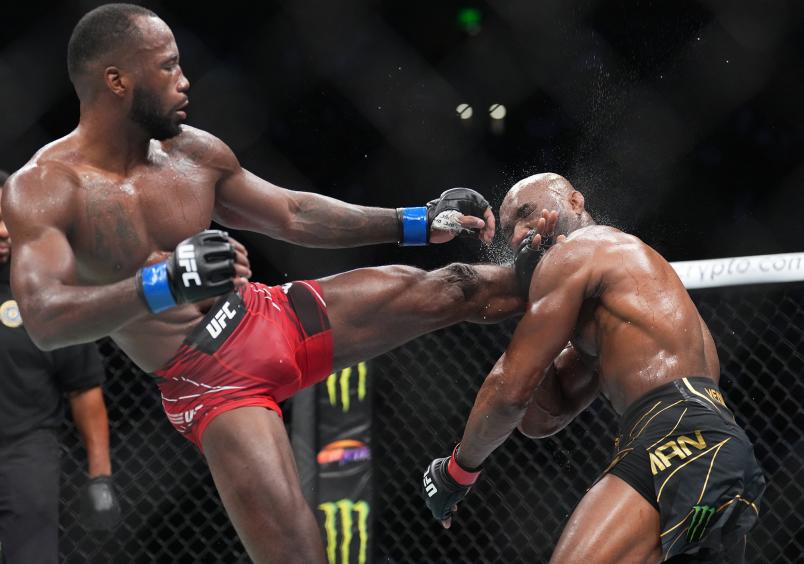 Leon Edwards of Jamaica lands a head kick to Kamaru Usman of Nigeria in the UFC welterweight championship fight during the UFC 278 event at Vivint Arena on August 20, 2022 in Salt Lake City, Utah. (Photo by Chris Unger/Zuffa LLC)

Are you kidding me?!

Leon Edwards is your new UFC welterweight champion, pulling victory from the jaws of defeat with just seconds remaining in the UFC 278 main event.

The challenger flashed in the first round, tripping Usman to the ground and landing in mount, transitioning to the back before spending the final minute hunting for a choke and showing he was game. For the next three-and-a-half rounds, Usman was in control.

With each subsequent round, the pressure, pace, and championship fight experience of Usman took a toll on Edwards, who struggled to land with force and conceded takedowns much easier. The challenger had a moment of success early in the fourth, securing a waist lock and looking to sink his hooks, but Usman worked free and instantly put Edwards on the deck, grinding on him from before letting loose with his hands right before the end of the round.

Usman remained on the pressure in the fifth and final round before a low blow paused the action with just under two minutes remaining. On the restart, Edwards had a little bounce in his step, and as Usman hung out at range, “Rocky” uncorked a left high kick that landed flush and instantly shut off Usman’s lights.

Edwards celebrated before the emotion washed over him, while Usman sat on the stool, wondering what went wrong.

The rivals will likely have to do it again after Usman enjoyed such a lengthy reign and controlled the majority of the fight, but Edwards will be walking into the rematch with the gold around his waist. 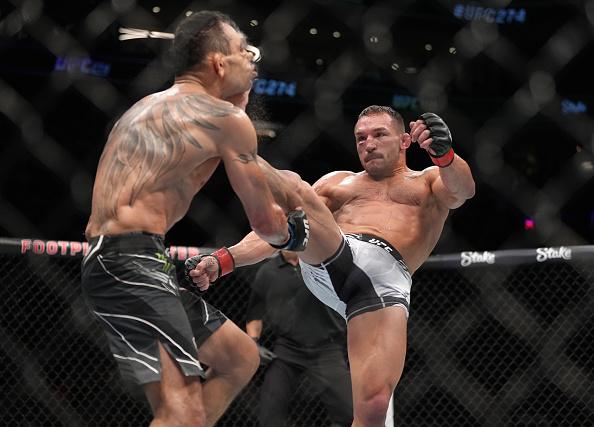 Michael Chandler knocks out Tony Ferguson in a lightweight fight during the UFC 274 event at Footprint Center on May 07, 2022 in Phoenix, Arizona. (Photo by Jeff Bottari/Zuffa LLC)

Michael Chandler scored one of the most memorable knockouts in recent history, finishing former interim lightweight champion Tony Ferguson with a front kick in the second round.

A left hand scored a flash knockdown of Chandler late in the first minute of round one, but Chandler stood up swinging haymakers. He landed some shots, but Ferguson returned fire until Chandler scored with a thudding takedown. Ferguson fired off elbows from his back, cutting his foe, but Chandler kept throwing shots from the top position, cutting “El Cucuy.”

The end then came suddenly in round two, with a right front kick landing flush to the jaw and knocking Ferguson out immediately. The official time of referee Jason Herzog’s stoppage was :17 of the second round. 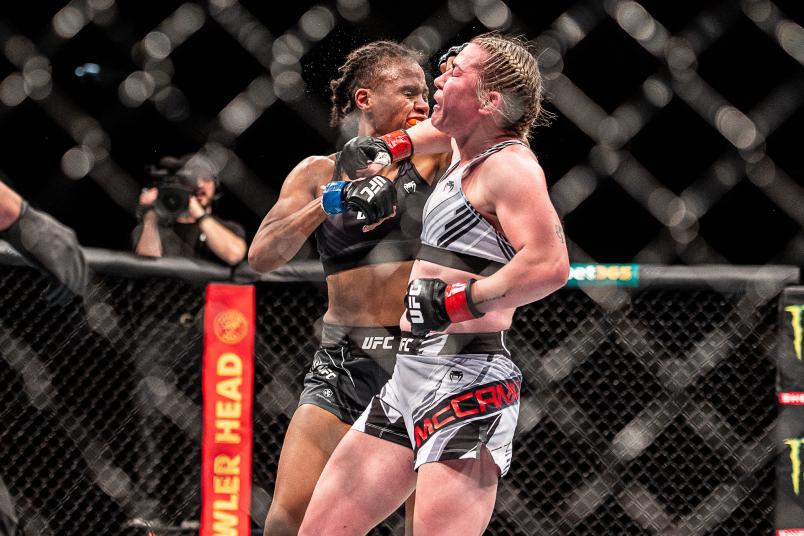 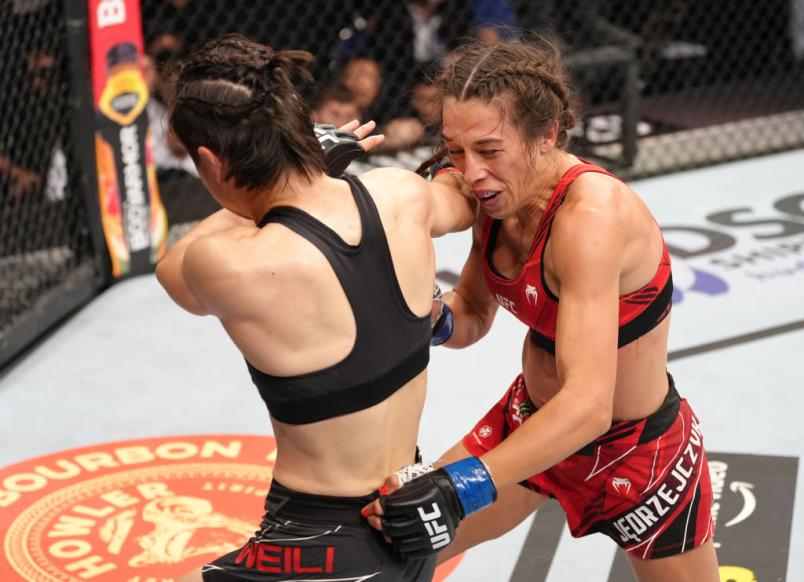 Zhang Weili of China knocks out Joanna Jedrzejczyk of Poland with a spinning back fist in a flyweight fight during the UFC 275 event at Singapore Indoor Stadium on June 12, 2022 in Singapore. (Photo by Jeff Bottari/Zuffa LLC)

The rematch between former strawweight champions Zhang Weili and Joanna Jedrzejczyk wasn’t as epic as their first bout, but it was just as memorable, with a frantic first round followed by a highlight reel knockout by Zhang in the second and Jedrzejczyk announcing her retirement in the Octagon.

Jedrzejczyk was busy from the start, and she had success, prompting a takedown by Zhang in the second minute. While on the mat, Zhang unloaded with her strikes, and while Jedrzejczyk got back to her feet, she was returned to the mat two more times with similar results, as Zhang’s ground strikes were coming in a fast and furious fashion. With under two minutes left, Zhang got the mount position and the punishment continued, as Jedrzejczyk was simply being overpowered. Finally, Jedrzejczyk found daylight and got back to her feet, picking up where she left off before the takedowns, and when the round ended, the crowd erupted.

Zhang opened the second with hard body kicks that kept Jedrzejczyk at bay for a spell, but the Poland native walked through them, intent on getting her own shots in. Jedrzejczyk defended Zhang’s takedown attempt well, but as she subsequently marched forward, Zhang landed a flush spinning backfist that put her down face first, and referee Marc Goddard halted the bout. The official time was 2:28.

The No.2-ranked Zhang moves to 22-3 with the win. The 34-year-old Jedrzejczyk, the second fighter to hold the 115-pound title that she successfully defended five times, retires with a record of 16-5. Zhang defeated Jedrzejczyk via split decision in March 2020. 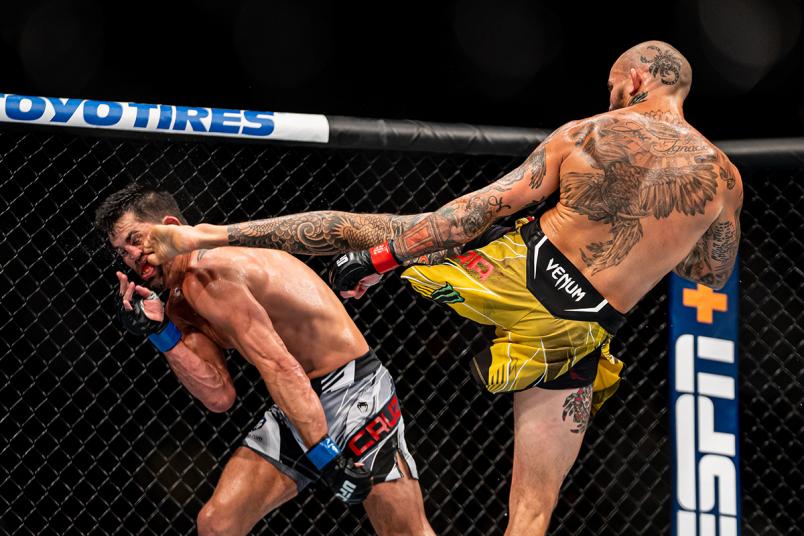 Marlon Vera of Ecuador knocks out Dominick Cruz with a high kick in a bantamweight fight during the UFC Fight Night event at Pechanga Arena on August 13, 2022 in San Diego, California. (Photo by Jeff Bottari/Zuffa LLC)

For a while, former bantamweight champion Dominick Cruz looked to be sailing to one of the most impressive victories of his career in his hometown of San Diego. Marlon Vera had other ideas, and he closed the show on the future UFC Hall of Famer, stopping Cruz in the fourth round of their UFC Fight Night main event.

Cruz attacked with a combination to open the fight, and moments later came another one, catching Vera off guard. A quick takedown followed in the second minute but Vera shot right back up. A left to the jaw by Vera dropped Cruz and evened the score, but Cruz  was up and back to work a second later. And work Cruz did, as his flurries piled up the points, and so did a takedown in the closing minute. Vera nearly locked in a submission late, but Cruz escaped and was in control at the horn.

Cruz continued to mix his attacks up nicely in the second, as Vera was more patient in his attack, knowing that he had the power advantage. But Cruz wasn’t sticking around to get hit, though, and he largely avoided trouble thanks to his in and out movement.

Ninety seconds into the third round, a right hand by Vera stunned and dropped Cruz, but the hometown hero rose immediately and flurried at his foe, getting right back to what he was doing before the knockdown. Vera was more aggressive, though, perhaps knowing that there was work to be done to get back in the fight on the scorecards.

A minute into the fourth, there was another flash knockdown for Vera, this time with a straight left. Again, Cruz got up, apparently unhurt, and while he was still moving, he was slowing down as Vera closed in, and with a single left kick to the head, “Chito” closed the show, with Cruz dropping to the mat, his nose broken. Referee Herb Dean then moved in, with the official time of the finish 2:17 of the fourth round. 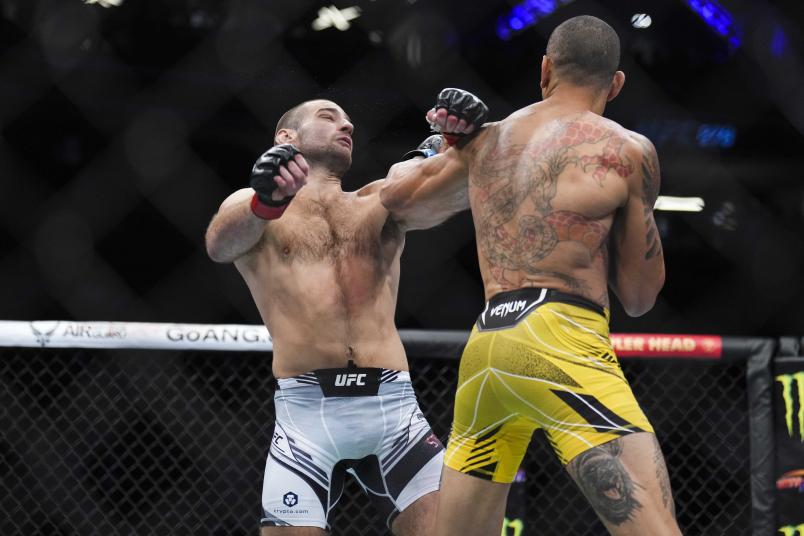 After a tactical opening from both fighters, Pereira struck with speed and finality, as a left hook staggered Strickland and put him on a knee, and as the Californian rose, a right hand sent him down and out. The official time of referee Jason Herzog’s stoppage was 2:36 of round one. 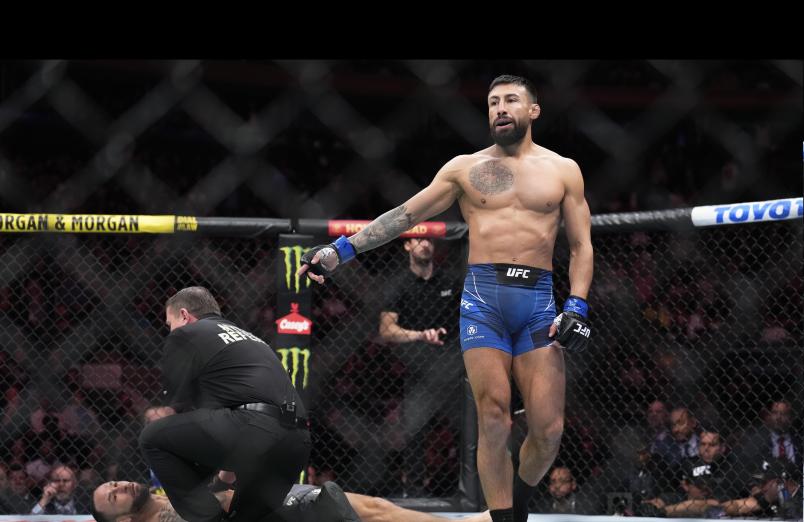 Chris Gutierrez reacts after his knockout victory over Frankie Edgar in a bantamweight bout during the UFC 281 event at Madison Square Garden on November 12, 2022 in New York City. (Photo by Chris Unger/Zuffa LLC)

Chris Gutierrez scored the biggest win of his career on Saturday night, knocking out Frankie Edgar in the first round with a beautifully placed knee.

Gutierrez was the quicker, sharper man from the outset, stinging Edgar in the early exchanges and picking at him from range, getting his reads. When Edgar stepped in, Gutierrez planted a perfect stepping knee on the button, knocking out the retiring former lightweight champion and future Hall of Fame inductee.

This was a terrific performance for the streaking Gutierrez, who has now won four straight and is unbeaten in his last eight. He’s an ascending name to watch in the bantamweight division, and this is an effort that shouldn’t be diminished because of Edgar’s pending departure. 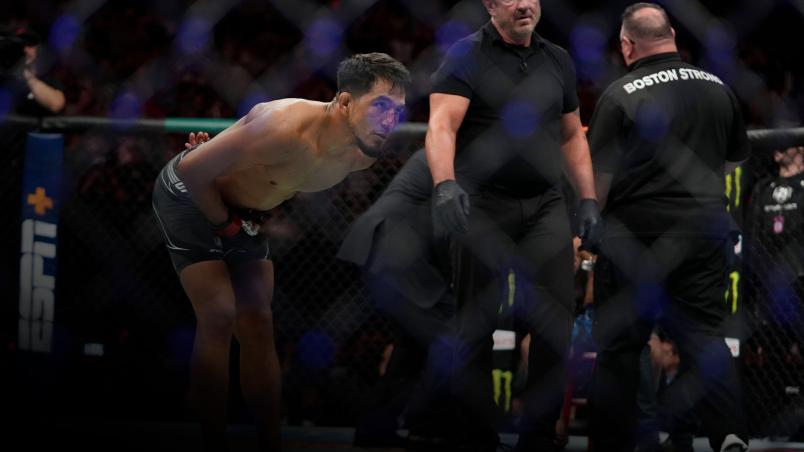 Bantamweight prospect Adrian Yanez made the most of his promotion to the main card, as he halted Tony Kelley in a single round.

Houston’s Yanez was hitting his mark early and often against his foe, and it just got worse for Kelley, who got gradually picked apart until a knockdown followed by flush follow-up shots brought in referee Kerry Hatley to stop the fight at 3:49 of the opening frame. 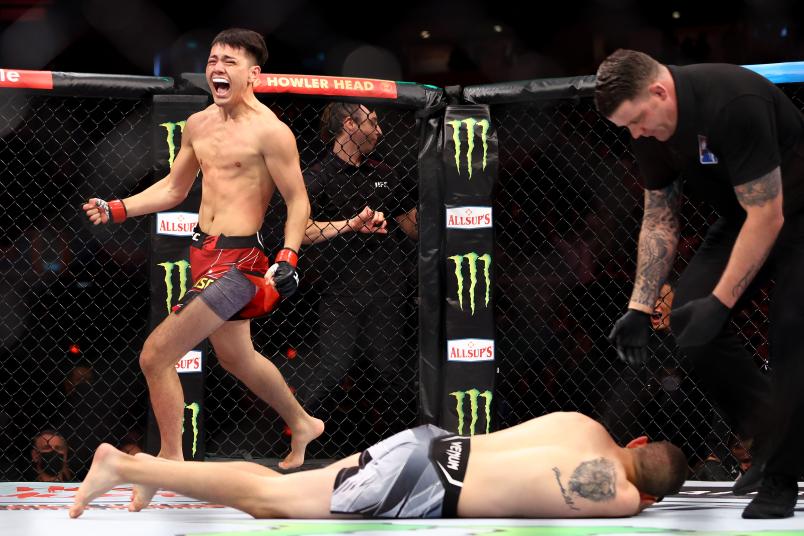 Hayisaer Maheshate of China celebrates after knocking out Steve Garcia of the United States in their lightweight bout during UFC 275 at Singapore Indoor Stadium on June 12, 2022 in Singapore. (Photo by Yong Teck Lim/Getty Images)

Garcia came out winging shots, and he rocked Maheshate in the opening minute, only to suffer a flash knockdown in response. Garcia recovered quickly, but once the two broke from a clinch, Maheshate landed a flush right hand that sent Garcia down and out. The official time of referee Marc Goddard’s stoppage was 1:14.