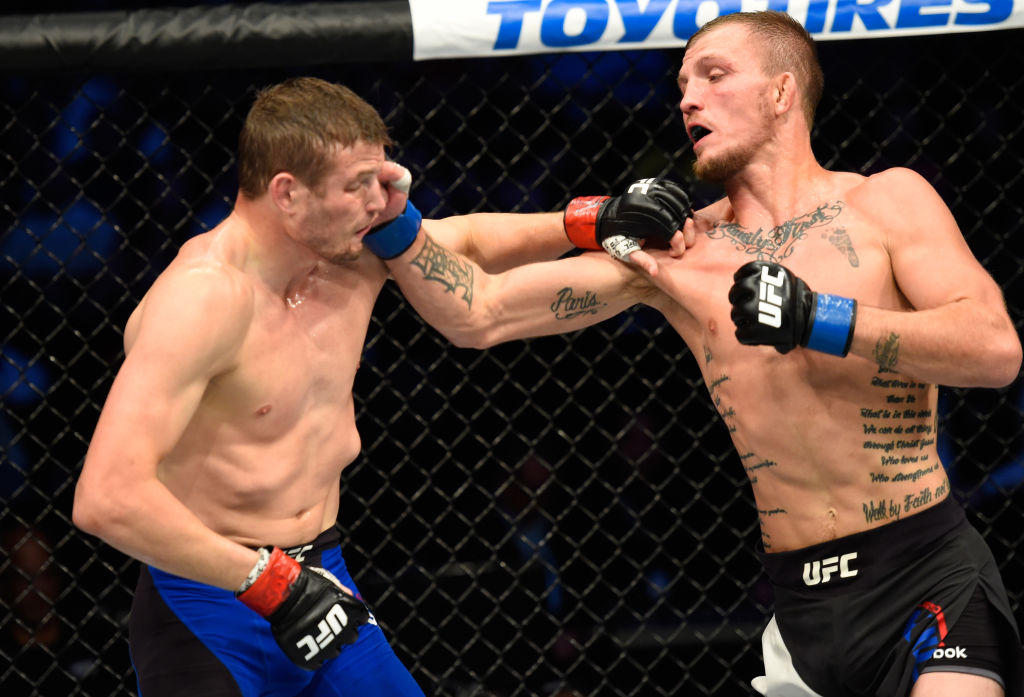 Whether Jason Knight is dubbed “Mississippi Mean” or “Mississippi Diaz,” fight fans won’t forget the name of the exciting featherweight prospect, who won his fourth straight with a third-round stoppage of Chas Skelly in UFC 211 prelim action at American Airlines Center in Dallas on Saturday.

Knight and Skelly fought it out all around the Octagon in the opening round, Knight holding the edge in the standup game, but Skelly evening things up with a takedown. But on the mat, Knight fought well in the scrambles and stayed busy, tiring his foe in the process.

In the second, Knight extended his lead, but Skelly was still in the hunt, cutting his foe under the right eye and landing some hard shots just before the horn. But in round three, Knight closed the show, dropping Skelly with a hard right before a series of ground strikes brought in referee Jacob Montalvo to stop the fight at the 39-second mark of the final round.

Late notice heavyweight replacement Rashad Coulter may have lost his Octagon debut to Chase Sherman, but Dallas’ “Daywalker” left an impression with his hometown fans, putting up a courageous effort before getting halted in the second round by “The Vanilla Gorilla.”

Sherman had a dominant first round thanks to a seemingly endless barrage of kicks to Coulter’s left leg, and by the end of the frame, the Texan was getting staggered by each shot downstairs. Coulter landed his share of right hands, but with Sherman taking away his lead leg, things weren’t looking good for the newcomer.

Coulter came out fast for round two, but after catching a punch to the face, Sherman landed a knee and two more leg kicks, and a right hand then put his opponent down. Coulter wasn’t ready to go away though, and when he rose he drilled Sherman with several hard punches, igniting the crowd. Now it was a war, with both fighters teeing off on each other, but a final right elbow put Coulter down and this time, referee Jacob Montalvo had seen enough, halting the bout at 3:36 of the second round.

With the win, D’Iberville, Mississippi’s Sherman improves to 10-3; Coulter, who replaced Dmitry Poberezhets, falls to 8-2. 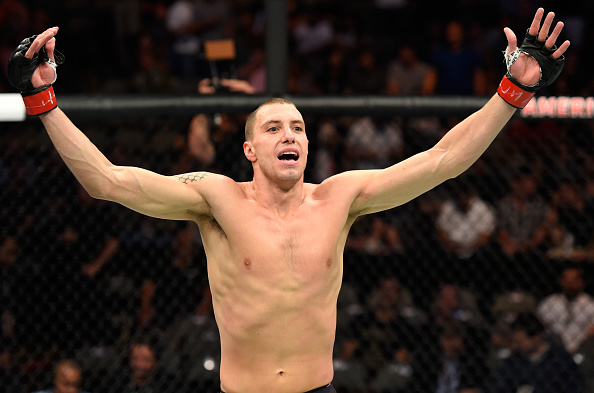 Vick used his range well as the bout began, yet just as Reyes looked like he was going to make a run and turn the fight into a war, Vick landed a crushing right hand that dropped Reyes. Reyes immediately covered up, and after a series of unanswered blows, referee Don Turnage intervened, halting the bout at the 2:39 mark.

Strawweight action fighter Cortney Casey may have crashed her way into the top 15 at 155 pounds with a shutout three-round unanimous decision over No. 12-ranked Jessica Aguilar.

Casey fought at a torrid pace in the first round, controlling the standup game and even staying busy from her back when put on the mat. Aguilar did land a punch after the horn that seemed to momentarily rattle Casey, but as soon as round two began, “Cast Iron” was back on the attack, scoring with a hard knee before Aguilar was able to get the fight to the canvas. Casey’s upkicks kept Aguilar from getting her offense in gear, though. In the final minute, Aguilar was finally able to get some work done from the top position, and she kept Casey grounded until the horn sounded.

In the third, Casey continued to pile up the points standing while bloodying her game foe, who wasn’t able to shake off the ring rust from being on the sidelines since August 2015.

After eating some hard kicks and a crisp left hand from Benitez in the early going, Barzola responded with two takedowns, but Benitez easily got back to his feet both times. The third takedown saw Barzola have more success as he was able to lock the Tijuana native up against the fence, but Benitez’ ability to escape continued to impress, and when at range, he made his foe pay. But it was Barzola with another takedown before the horn.

Barzola’s pressure and grappling earned him the second frame, and his ability to hang with Benitez in the striking game only aided his cause.

After getting the bout back to the mat early in round three, Barzola nearly sunk in a rear naked choke, but Benitez was able to escape, scramble out of danger and get back to his feet. Barzola put the fight on the deck again, but Benitez got the last word with a left that knocked the Peruvian battler down just before the final horn.

Russian up and comer Gadzhimurad Antigulov made short work of Joachim Christensen, submitting the Copenhagen product in the first round of their light heavyweight opener.

Getting the fight to the mat shortly after the bout began, Antigulov (20-4) got his opponent’s back in the second minute, and that was it for Christensen (14-5), who was forced to tap out from a rear naked choke at 2:21 of the opening stanza.