Knight inspires on his way to the top of UFC 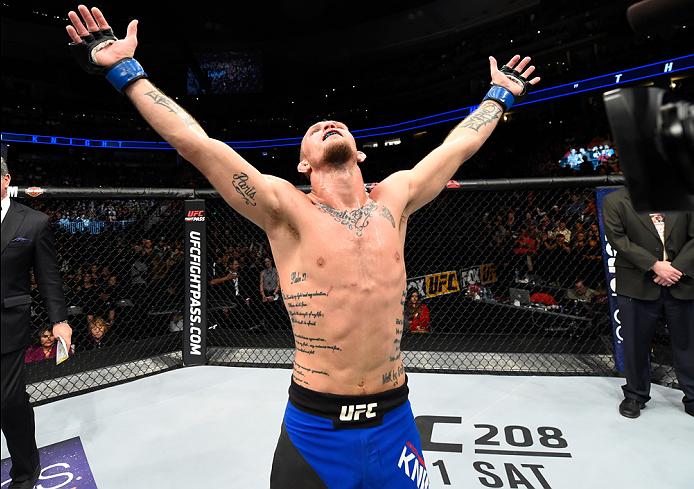 From the first time Jason Knight stepped into the Octagon for a short notice bout against Tatsuya Kawajiri in December 2015, it was clear that the Mississippi native wasn’t going to be one and done in the UFC.

Sure, he lost a hard-fought decision to the Japanese veteran that night, but he had that spark, that certain something that made you want to see him fight again. And three subsequent wins and two post-fight bonuses have confirmed those feelings and landed him in a UFC 211 bout against fellow featherweight prospect Chas Skelly on May 13.

It’s been quite a crazy ride so far, but the 24-year-old from D’Iberville is enjoying it all.

“I’m loving it,” he said. “It’s a good thing for me because the more that people know me, the more money I get to make and the more I get to do for my family. My main thing is I’m trying to give my kids a better life than I had and make sure they don’t ever have to want for anything. And the more that people know me, the better it is for me and my family. It’s a pretty cool thing and I’m dealing with it pretty well.”

Get ready for UFC 211: Fight card | Camp updates: American Top Team, Strong Style | Andrade has become best version of self as strawweight | Watch: Free fight: Dos Santos vs Miocic 1 | Inside the numbers for the main event | UFC 211 extended preview | Do not miss out! Order the PPV now

Having three UFC wins and a growing fan base following his every move wasn’t always in the cards, though Knight hoped it would be. Yet even though he began training at 14 and turned pro at 17, the teenager was fighting an uphill battle from the start to get noticed in a state not exactly known for turning out UFC fighters.

“It’s hard for anybody in Mississippi to get noticed when there’s no one from Mississippi that’s ever been heard of,” he said. “So it was something I had to work on for a long time.”

That meant a lot of fights against all comers, all the while staying in the gym when he wasn’t working as a pipefitter. His coach and mentor, UFC vet Alan Belcher, was able to show him that getting to the big show was possible, but there were still obstacles to overcome.

“A lot of guys, especially where I’m from, it’s a really small town and you either work at the shipyard or build a house or do what your daddy did, and you never really make it out of this place,” Knight admitted, but he was determined to be different, and he was. That didn’t mean the phone was ringing, so while he was committed to winning and staying ready for that call from the UFC, when it did come, he was caught off guard.

“I knew it was probably going to be a short notice fight, so I tried to stay in shape and be ready,” he said. “But once they called for that Tatsuya Kawajiri fight, I had just had my baby boy and I had been out of the gym for a while preparing for him to get here, so I wasn’t really ready for that fight. But that’s an opportunity you can’t turn down, so I made sure I answered the call.”

And he fought his best until the gas tank ran empty. The next three fights against Jim Alers, Dan Hooker and Alex Caceres were quite different, though, and now he’s a new threat at 145 pounds that has become quite a favorite among hardcore fans. “The Kid” believes there’s a simple reason for that.

“I go out there and fight my hardest because that’s the only way I know how to do it. I fight hard every time because that’s the kind of fight that I want. I want something that’s not only going to entertain the fans, but that’s going to give me the chance to have some fun while I’m in there." -- Jason Knight

“I think people like me because I’m real,” Knight said. “I go out there and fight my hardest because that’s the only way I know how to do it. I fight hard every time because that’s the kind of fight that I want. I want something that’s not only going to entertain the fans, but that’s going to give me the chance to have some fun while I’m in there. I’m not one of those guys that tries to say some stupid s**t or make up something fake to sell it to the media. I’m who I am. If you like me, good. If you don’t like me, then oh well. I think people like that about me because I’m not changing myself for anybody. I’m gonna be me, regardless.”

That goes for out of the Octagon as well, as fame and a UFC contract haven’t changed Jason Knight. The only difference now is that his fellow fighters and even kids around the area have a hometown hero they can look up to.

“I’m still me,” he said. “I’m still the same guy that I was 10 years ago. Nobody was looking up to me two years ago, but now all of a sudden everybody is because I did something with my life and it’s a real cool thing. And now that I’ve done it, there are a lot of younger kids around here that are learning that, ‘Hey, I can do something with my life. All I’ve got to do is push myself and give it the best I’ve got, and I can make it.’ I’ve tried to stress that a lot to the younger generation, that you don’t have to be what everybody labels you as or be stuck in that rut. It doesn’t matter where you came from. I had a rough life. My parents didn’t have money or anything like that, and everything I got, I worked for and earned it. And you can earn something and make something of yourself.”

The Only 2 Upkick Finishes in UFC History

Check out some of the best kimura finishes in UFC history, featuring legends like Khabib Nurmagomedov,