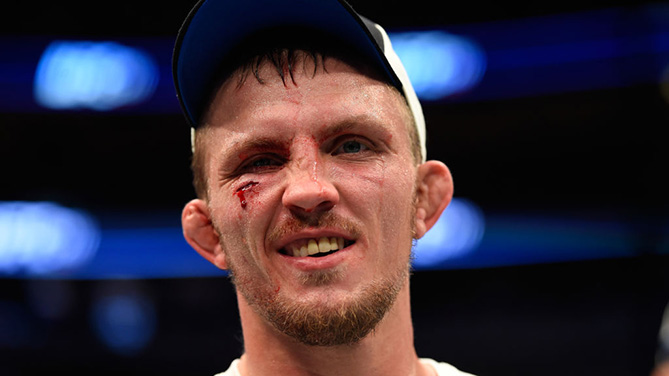 Over the course of two years, Jason Knight has gone from an unknown newcomer making his debut on short notice to a veritable cult hero with UFC audiences.

His crowd-pleasing style and string of entertaining performances struck a familiar note with observers, who saw more than a little of Nick and Nate Diaz in the D’Iberville, Mississippi native leading to the 25-year-old featherweight being given a secondary nickname that Knight embraces.

“I like it,” he said of the “Hick Diaz” moniker that has become his unofficial handle within the MMA community, similar to the way interim middleweight champ Robert Whittaker is widely referred to as “Bobby Knuckles.”

“Some people might get offended if you call them a ‘hick’ or something like that but man, I embrace that. I was born in the South, raised up as country as can be and it doesn’t really bother me. Every chance I get I’m out there mud riding on my four-wheeler or out in the woods hunting, so it really doesn’t bother me none.”

Though hailing from opposite sides of the country, the comparison between Stockton’s favorite sons and Knight, who returns to action against Gabriel Benitez this weekend, are fitting.

Like the Diaz Brothers, Knight likes to come forward slinging leather and has a ground game that doesn’t get as much attention as it should. On top of that, all three have a similar penchant for taunting their opponents and talking just about as much as they throw once the cage door closes.

“The Diaz Brothers have always been some of my favorite fighters, guys I looked up to,” admitted Knight, who trains under former UFC middleweight Alan Belcher. “They don’t give a damn what you think about them. They’re going to go out there and fight their *** off and win, lose or draw, they’re going to talk **** and have a blast while they’re doing it.

“That’s the way that I am and that’s the way I like to be too. If you’re going to beat me in a fight, I bet you can’t beat me in a s***-talking match while we’re fighting; that’s kind of how I am. They’re my kind of people and it doesn’t bother me one bit to get compared to them.”

With his place as a fan favorite secured, Knight is ready to resume his run up the featherweight ladder – a journey that was forced to take a detour back in July when Ricardo Lamas brought his four-fight winning streak to a screeching halt.

The matchup with the former title challenger was a significant step up in competition for Knight, who earned back-to-back stoppage wins over Alex Caceres and Chas Skelly to kick off his 2017 campaign, and although he came out on the wrong side of the results, the talented upstart believes he’s better because of it heading into his co-main event assignment opposite Benitez this weekend.

“I don’t look at that fight as a loss,” said Knight of his UFC 214 bout with Lamas. “Sure, it goes as a loss on my record, but the way I look at it is that the only real loss is whenever you don’t learn anything from it and I realized that I can’t always rely on my chin; that’s something I’ve always done.

“I’ve got a tough chin and I don’t go to sleep very easy, but Ricardo Lamas hit me and it never slacked up. Usually when I get hit with a good shot, it takes me three seconds and I recover, but at that level, fighting against guys like that, they know whenever it’s time to really pour it on and when he hurt me, he knew that he hurt me and he kept coming until he finished the fight.

“In my eyes, everybody has to have that big loss to stop your head from getting so big,” he added with a laugh. “I’ve never been caught with a punch that I couldn’t take and Ricardo Lamas let me know that you can’t always rely on that chin. Hopefully after that loss I’ll go on another good win streak.”

The featherweight division has been a hotbed for competitive, entertaining fights since the jump, and the depth of talent continues to improve and impress with each passing card. That makes building momentum and breaking through a tall order, which is why Knight was on the phone and in the ear of UFC matchmaker Sean Shelby immediately following his loss to Lamas.

While he’s been ready to go and chomping at the bit to get back in the cage, the opportunity hasn’t presented itself until now, and while Knight acknowledges that the former TUF Latin America contestant Benitez is a tough customer, he’s focused on getting back into the win column and starting to face the more established names ahead of him in the rankings once 2018 gets under way.

“I’ve worked my ass off for this fight and I’m ready to go,” said Knight. “I’m gonna show the fans why I deserve to be in the Top 15 and show Sean Shelby why my next fight should be against one of those guys that’s on up the ladder instead of someone that’s way, way out of the rankings.

“They might have given me this fight as a comeback fight – and that’s no disrespect to Gabriel Benitez, who I know is going to be a very tough fight – but I don’t want to be fighting guys out of the Top 15 now. I want to fight whoever gets me closer to the title. I’m gonna go out here and fight my heart out so I can get closer to that belt.”