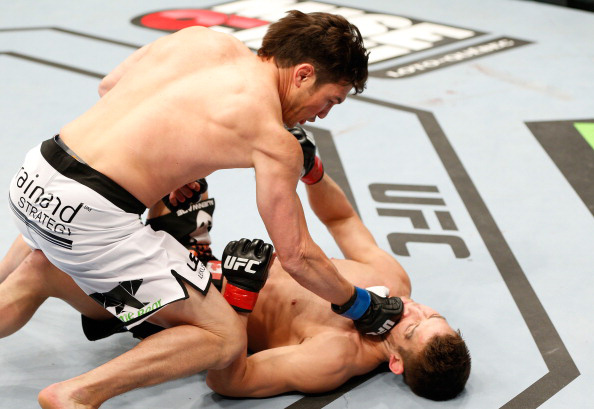 QUEBEC CITY, April 16 – In a TUF Nations Finale prelim bout changed on fight week from lightweight to welterweight, KJ Noons showed impressive power at the new weight in stopping durable Sam Stout in less than a minute on Wednesday at the Colisee Pepsi.

Expected to be a three round striking war between the steel-chinned combatants, Noons found the mark a lot earlier than that, drilling Stout with a right hand that put the Ontario native on the canvas. A follow-up left-right by Noons ended matters, with referee Philippe Chartier intervening 30 seconds into the opening stanza.

After two opponents fell by the wayside due to injury, Sarah Kaufman finally found a foe in rival Leslie Smith, and in their eagerly-anticipated rematch, Kaufman thrilled her Canadian fans with a three round unanimous decision victory.

Scores were 30-27 for British Columbia’s Kaufman, who defeated Smith by way of a controversial split decision in April of 2013. The former Strikeforce women’s bantamweight champion had seen bouts with Shayna Baszler and Amanda Nunes both scrapped before Smith stepped up on short notice.

Kaufman and Smith picked up where they left off in their first fight, thrilling fans with back and forth exchanges throughout the first round. And while both fighters were busy, Kaufman was the sharper of the two, with a nice mix of punches, kicks, and knees giving her the early advantage.

Smith, who looked like there was no place in the world she would rather be, ran out of her corner to open round two, throwing a front kick at Kaufman as soon as she got close. Kaufman kept her composure, with her shorter and straighter punches allowing her to again surge ahead in the face on Smith’s relentless attack.

With Smith’s fatigue of taking a fight on short notice finally starting to show itself, Kaufman moved her game to close quarters in the third and she was able to dominate and finish strong, leaving no doubt about the result the second time around.

After the first five fights of the night went the distance, Edmonton light heavyweight Ryan Jimmo brought the crowd to its feet with a first round highlight reel knockout of UFC newcomer Sean O’Connell.

Back in action for the first time since his injury-induced loss to Jimi Manuwa last October, Jimmo (19-3) looked to be focused and in control from the start, and while the gritty O’Connell (15-5) was competitive while hanging tough for much of the fight, a single right hand sent the Utah product to the mat, with the follow-up barrage bringing in referee Dan Miragliotta to stop the fight at 4:27 of the first.

It may not have been pretty, but George Roop used his veteran experience to pound out a three round unanimous decision win over Dustin Kimura in bantamweight action. 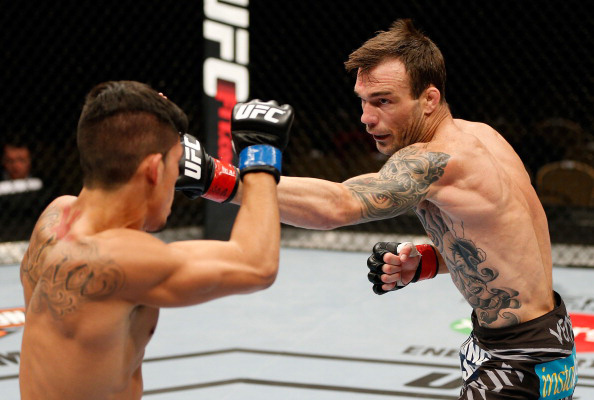 After some early stand-up exchanges that saw Kimura hold a slight edge due to sharp counterpunching, the two 135-pounders traded takedowns, with Roop now taking over due to a strong ground and pound assault.

There was little significant damage done in the stand-up game in round two, with Kimura breaking the stalemate with two takedowns. Those takedowns probably earned the Hawaiian the round, but the fans weren’t happy with the lack of sustained action.

Roop got the fight to the mat in the opening stages of the final round and he kept it there, effectively controlling Kimura with punches and elbows as he didn’t allow his opponent any means of escape.

Lightweight veteran Mark Bocek got a fight in his first bout since November of 2012, but he also got a win, eking out a close split decision over Octagon debutant Mike De La Torre.

Bocek put the UFC newcomer in trouble almost immediately, rocking him with a right hand. The Arizonan recovered quickly though, avoiding Bocek’s takedown attempts while getting the Canadian to the mat himself for a few seconds. The rest of the round played out a close range, with each fighter getting off some solid punches and having his moments in the clinch.

As Bocek tried to get the fight to the mat in round two, De La Torre began picking his foe apart with his strikes, bruising the veteran’s face in the process.

De La Torre continued to beat Bocek to the punch in the final stanza, bloodying his opponent’s face as Bocek tried to even things out in the grappling realm. In the final 30 seconds, the Ontario native took De La Torre’s back while standing, but the debutant kept himself out of trouble. 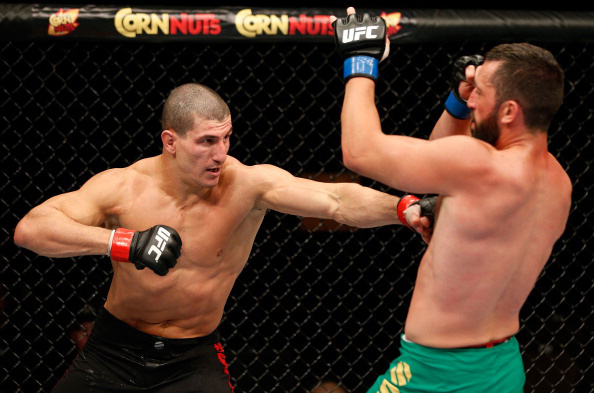 Despite having success in his usual realm of the stand-up game, Taleb’s plan of attack in the first round saw him control the action mainly on the ground, easily earning him the frame on the scorecards.

A slam by Taleb (9-2) in the first 30 seconds of round two ensured that the action would return to the mat, and with the exception of a brief return to the feet by Grujic (6-4), it remained there for the middle five minutes of the bout, Taleb in control the whole way.

Grujic attacked with haymakers to start the third, hoping to turn things around, but Taleb avoided the assault, patiently waiting until he could take a visibly frustrated Grujic down again. And that’s where he kept him, bloodying the Melbourne native just before the bout concluded to put an exclamation mark on his victory.

In a meeting of TUF Nations welterweights from Australia, “Filthy” Rich Walsh nabbed his first Octagon win with a shutout three-round unanimous decision over Chris Indich.

The first round was all Walsh, as he swarmed Indich and didn’t give him any semblance of daylight – either standing or on the mat – for the initial five minutes.

Walsh’s onslaught continued in the second, with a barrage of early blows drawing a roar from the crowd. And while matters slowed down against the fence until another late surge from the Sydney product, it was still another dominant effort from Walsh, and it continued into the final round, with Walsh mauling his foe at close range until the end of the bout.

Ontario bantamweight Mitch Gagnon got things off to a good start for the Canadian contingent, scoring a three round unanimous decision win over TUF 18 alumnus Timmy Gorman.

Gorman was as competitive as he could be without winning the round in the opening frame, but 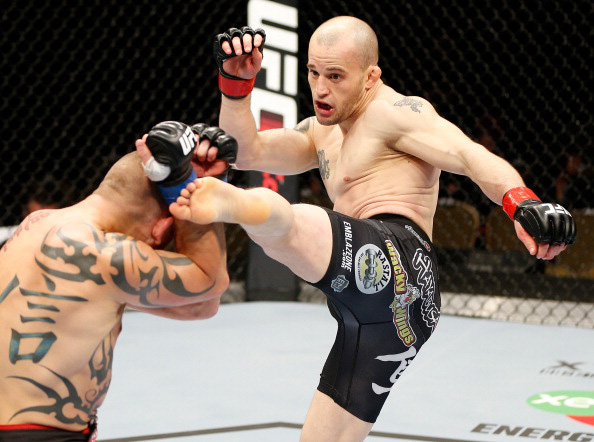 Gagnon still held the advantage at every turn, firing off punching combinations while mixing in thudding body kicks, and when he wasn’t in control in the stand-up game, his grappling – both offensively and defensively – was on point throughout.

The pace dipped in the second, with Gorman going all in as he sought the takedown, but even when he got it in the final minute of the round, it was Gagnon almost catching him in a triangle choke before the Iowan pulled free.

Gagnon sought – and got – a takedown attempt to begin the final frame, but the two quickly rose, with Gorman trying to even the score. Yet despite his best efforts, he wasn’t able to, allowing Gagnon to potshot his foe from long-range and take him to the mat in the last two minutes, wrapping up his clear-cut victory.