"I feel like I'm coming full circle. It's really nice
coming into the biggest organization when it is at its biggest." - KJ Noons 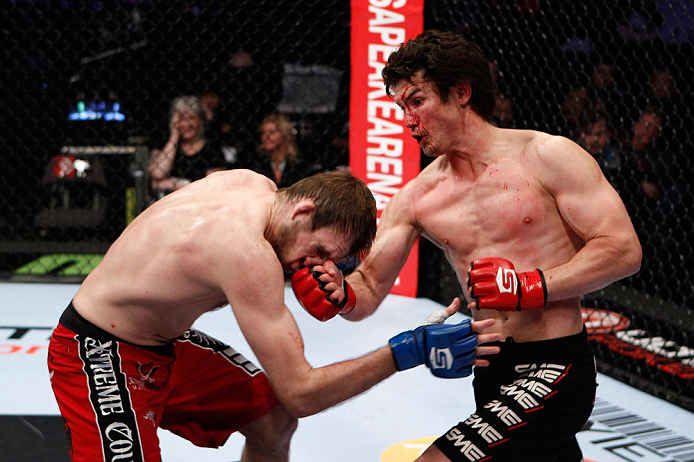 It has been a long wait for MMA fans, but Karl James (KJ) Noons is finally joining the UFC roster and it’s happening at just the right moment.

After experiencing an already full career in combat sports outside of the Octagon, Noons is excited and ready to make his lightweight debut while the company is at its most prominent point in history on a premier pay-per-view against a top tier opponent. Honestly, it couldn’t have worked out much better nor at a better time than seeing the veteran of MMA, boxing, and kickboxing stepping into the UFC’s trademarked eight-sided cage under the bright Las Vegas lights on a big holiday card and set to tango with a near perfect dance partner in Donald “Cowboy” Cerrone. Although faithful fans have clamored for this for a while, it makes sense Noons is joining the highly-touted 155-pound roster at this precise time.

“I feel like I'm coming full circle,” admits Noons. “It's really nice coming into the biggest organization when it is at its biggest. When I first started, I think PRIDE was the biggest. I tried different routes with kickboxing, boxing, and MMA. Now, the UFC has gotten so big and it is at its biggest right now. I don't think anyone knew how big it was going to be. I turned pro when I was 18 and I was kickboxing before PRIDE was big, like 12 years ago. The UFC has done such a great job, especially in the past four years. I don't think anybody would have thought it would be this big. I think it's more exciting to be coming into the UFC at its peak.”

For the uninformed, the 30-year-old Noons has been a fighting fixture for much of the past decade as a consummate title contender and as the other half of a featured rivalry with Nick Diaz which spanned two companies and weight divisions. As many MMA fighters have flirted with the idea of lacing up a pair of heavier gloves and taking on the competition in sister sports like boxing and kickboxing, Noons simply did it – with around a dozen wins to two losses in each. Simply put, the Hawaii native has been a lifelong athlete and a martial artist, originally taught kenpo karate at the age of five by his father, Karl James Sr., who was a former professional kickboxer.

Preparing to enter the next stage of his career in the UFC, he’s still the same aggressive standup fighter as ever, but Noons is now a proud father to Karl James III and husband to Melany as well. Obviously, he has plans to pass along the family’s striking secrets, but don’t necessarily bet on seeing the next generation Noons in a cage like the old man.

“I'll support him no matter what he wants to do, but you're going to have to get that past his mother,” laughs Noons. “I definitely want him to be able to defend himself, but I don't think his mother is going to want to see him fighting. I like golf a lot, so let's try golf first (laughs).”

It was no joking matter when the scorecards were read following Noons’ final fight in Strikeforce. “As far as I knew, you had to win to get into the UFC,” remembers Noons, who took on fellow Strikeforce stalwart Ryan Couture in January, a bout which ended in a split decision in favor of Noons’ opponent. Most of the crowd in attendance and many on social media, including UFC President Dana White, didn’t share the opinion of the judges and thought Noons was robbed of the victory. What’s done is done as far as the outcome of the bout, but it’s clear that the UFC thinks a lot of Noons with the matchmaking of his first fight and they expect him to entertain inside the Octagon as he has done many times over in other organizations.

“I thought it was a good fight,” tells Noons. “We had a really good camp and I stuck to the game plan. My corner tells me where I'm at after every round and we felt like we were pretty strongly ahead in every round. I stuck to the plan and stayed with my corner, but the judges saw it differently. You've got to pick yourself up and dust yourself off and move on. I feel like the UFC didn't look at it as a loss because they gave me an opponent who is up in competition as if I had won the fight. If not, they would have given me a guy who is up-and-coming, but they didn't. I'm on the main card of one of the biggest cards of the year. I feel like that says what kind of performances they think I have had and what kind of action-packed performances I can bring to the table.”

Up next for Noons is a lightweight collision on Memorial Day weekend with Cerrone at UFC 160 in Las Vegas, Nevada. “Cowboy” has been a nearly untamable force inside the Octagon since transferring over from the WEC, and the product of Jackson’s MMA has quickly earned himself six wins and six Fight Night bonuses in less than a year and a half in the company. Despite showing improved power in his standup, opponents should never forget he is a threat in all areas, with by far the majority of his wins coming via submission.

“He's a well-respected opponent in the UFC,” affirms Noons. “He's a well-seasoned veteran. He brings the fight. He has a lot of weapons and is good all-around. This guy is very dangerous. He's one of the top guys in the UFC and he makes for exciting fights. I'm sure he has a very good game plan and so do I. It should make it interesting when we get in there. Let's mix it up.”

When asked if he expects this to be the striker’s duel it appears to be on paper, Noons could not have been more clear answering, “No.” Even a cursory fan of Noons would know that if someone shoots for a takedown, it won’t be him. It’s almost crazy how few takedowns Noons has gone for over his career, with the decision win over Billy Evangelista being the sole scrap featuring takedown attempts by the San Diego resident. No matter who shares the cage with him, Noons is ready to sprawl and brawl with the best of them.

“Once they taste the glove or the kick they just want to take me down,” asserts Noons. “I'm always matched up against a pretty good guy who is pretty exciting. I'm never matched up against a guy who is a total grappler or a total jiu-jitsu guy. I'm always matched up against someone who is a banger or an all-around guy. Every time someone says that it looks like on paper that it is going to be an all-out war on the feet, the guy always tries to take me down or do what he has to do to win. They want to do what's their best opportunity to win the fight and their best opportunity is obviously to take it to the ground and do a little bit of this and little bit of that. If you're going to stand with me, you're going to lose. In my eyes. I train all around, but that's where my advantage is. On paper, it looks like a big standup war, but we'll see when the fight happens.”

In preparation for Cerrone, Noons is busy training around his adopted hometown of San Diego, California. Overseeing Noons’ readiness is the coaching staff from The Arena, namely Jeff Clark, Pat Speight, and Andy Schnadig. A lot of Noons’ training concerns heavily working his ground game and takedown defense to help keep the fight in his comfort zone standing as well as keeping him the cardio machine fans have come to expect. Besides getting set for Cerrone’s talents inside the cage, “Cowboy” has a gift for gab outside of it in the pre-fight trash-talk, which Noons is no novice at, but is low in ammunition at the moment.

“I love trash talking, but I'm not really good at it,” reveals Noons. “I don't really have anything bad to say about Donald. I don't have anything against him. I'll just let my fists talk in the ring. Maybe I'll talk trash in the ring (laughs). I don't really care about trash talking outside of the ring unless there really is something to talk about. Like Nick [Diaz] and I really didn't like each other. I don't have anything against Donald, so there's not anything bad for me to talk about. I think he's a really good fighter and I think he's a top-level opponent. I only have good things to say about him.”

Whatever Noons thinks of Cerrone outside the cage, conversely, no one is friends when they’re in it. “I usually talk a little bit in the ring; I'm down for that,” states Noons enthusiastically. “But like I said, I don't have anything bad to say about the guy now. I could talk a bunch of game, but, when it's all said and done, when my fights come on I would say they're exciting. He seems like a nice guy and he fights good - we'll see in the cage.”

This Saturday in the MGM Grand Garden Arena, opening up this hotly anticipated heavyweight title fight event will be two of the pound-for-pound most exciting lightweights the MMA world has to offer as Cerrone takes on Noons. After a lifetime of trading fists and feet, Noons is excited and ready to give UFC fans the fight they’ve been waiting for.