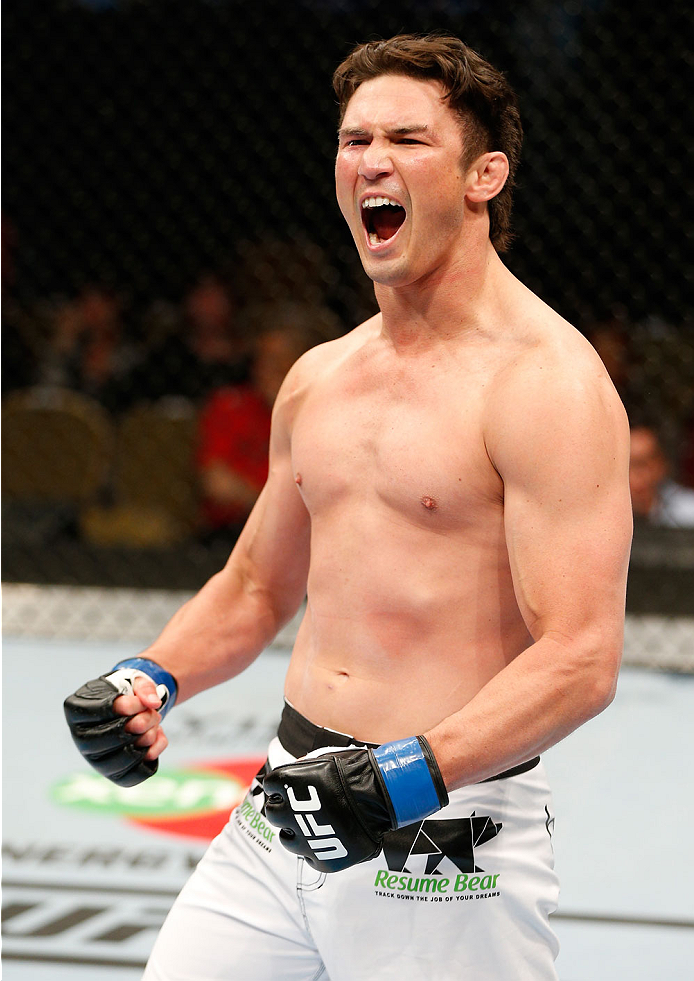 KJ Noons is in a good place these days. Winner of two straight in the UFC (though he will argue that he’s 3-1 in his last four and not 2-2), the lightweight veteran has reached a point in his career where he knows how to fight, he knows what he can do in the Octagon, and he’s ready, willing and able to do it against anyone willing to step in there with him.

“That isn't too bad at 32 years old,” Noons laughs. The way he says it is like he’s 62, not 32, but when you’ve been fighting as long as he has, to have his kind of longevity is notable. He’s still got more to offer though.

“I think I'm on the upswing, actually,” he said. “I think I'm a little bit better fighter now and smarter in my training, and I'm settling into that veteran style where I can get away with a lot of stuff.”

The Hawaii native is back in the Octagon tonight to face fellow striker Daron Cruickshank, but to prove that he has grown wiser in the fight game over the years, he’s not going to go all out and say that it’s going to be a three-round stand-up war. He’s been fooled before by such thinking, and often when someone gets a taste of the former pro boxer’s fists, it’s off to the ground game.

“I don't expect anybody to just stand with me the whole fight, and that's why I've been training for everything,” Noons said. “They want to take it to the best place for them, so I would expect him to try and go for a takedown or hold me against the fence, but that's what I train for and I'll be ready for everything.”

So he’s not counting on a Fight of the Night check just yet?

“I could use it and then I can hibernate for another six months,” he laughs, but based on his recent activity level, the San Diego resident may only be half-kidding. After a 2013 campaign in which he fought three times, Noons returned six months after his win over George Sotiropoulos to beat Sam Stout in 30 seconds in April, and now eight months later he’s facing Cruickshank. Is this what we have to expect – the KJ Noons Comet – from here on out?

“I've been busy doing other things, just trying to line stuff up, but I plan on fighting a lot next year,” he said. I’d like to get a lot of fights going. I feel good and healthy and if I'm still going to the gym and performing at a top level, why not?”

The 30-second knockout of Stout was an eye opener, and coupled with his decision win against Sotiropoulos, he is showing his most consistent form as a UFC fighter yet, and right on time considering that he was just 1-5 in his previous six bouts in the Octagon and Strikeforce.

“If you look at those fights, those were all top contenders,” he said. “The (Josh) Thomson fight, eh, it was kind of a s**tty deal how he fought me. The (Ryan) Couture fight I got robbed, and the (Donald) Cerrone fight, I actually watched it and I had an adrenaline dump. So I feel I can still contend with the best. I guess it really depends on what time of the year it is.

Noons laughs, referring to his love (note sarcasm) of the gym.

“I'll be in the gym and they'll be like 'where have you been?'” he said. “‘I'm at home, I didn't want to come to the gym. I want to rest my body and chill with my family.’ I've just got to get in shape, and know when to rest, and there are definitely priorities - my sons, my wife, and trying to get things going for myself because in this career you're only as good as your last fight. I've been fortunate to have been going a long time - boxing, kickboxing, MMA. But I'm excited to keep moving forward as the sport grows.”

With the sport growing, Noons has realized that once you figure out how to fight, the rest is learning how to train correctly. And not everyone follows the same path to that end result.

“I train very hard, but a lot of people see me do my own thing, where I don't spar as much or do whatever all these other guys do, but when it comes down to it, I've had one of the longest careers,” he said. “I turned pro when I was 18 in boxing and kickboxing, I have over 50 pro fights, and maybe I didn't train my hardest every year and go to my full potential, but I've been putting away and still making a good living.”

He still has that passion for the game too.

“I don't like the training, but I like the fighting,” he laughs. “It's tough. You've got to balance a lot of stuff - balance life, balance family, balance stuff you want to do in your personal life, and you have to sacrifice a lot. It's a lot of responsibility and a lot of dedication, but a lot of that stuff will carry over into the future for me in other businesses and other avenues. I'm not getting out of the game; I'm just trying to put irons in the fire in different areas and make sure that I've got all my bases covered after fighting when this is all done.”

And it’s not done yet, though when you ask him whether a title run is still in his future, he isn’t looking past tonight.