Kingsbury's Crazy Month Culminates with a Fight in Nottingham

"I really feel like the fans and the people that have been watching me
are hopefully gonna see a big jump in my game when I come out there
against Jimi." - Kyle Kingsbury 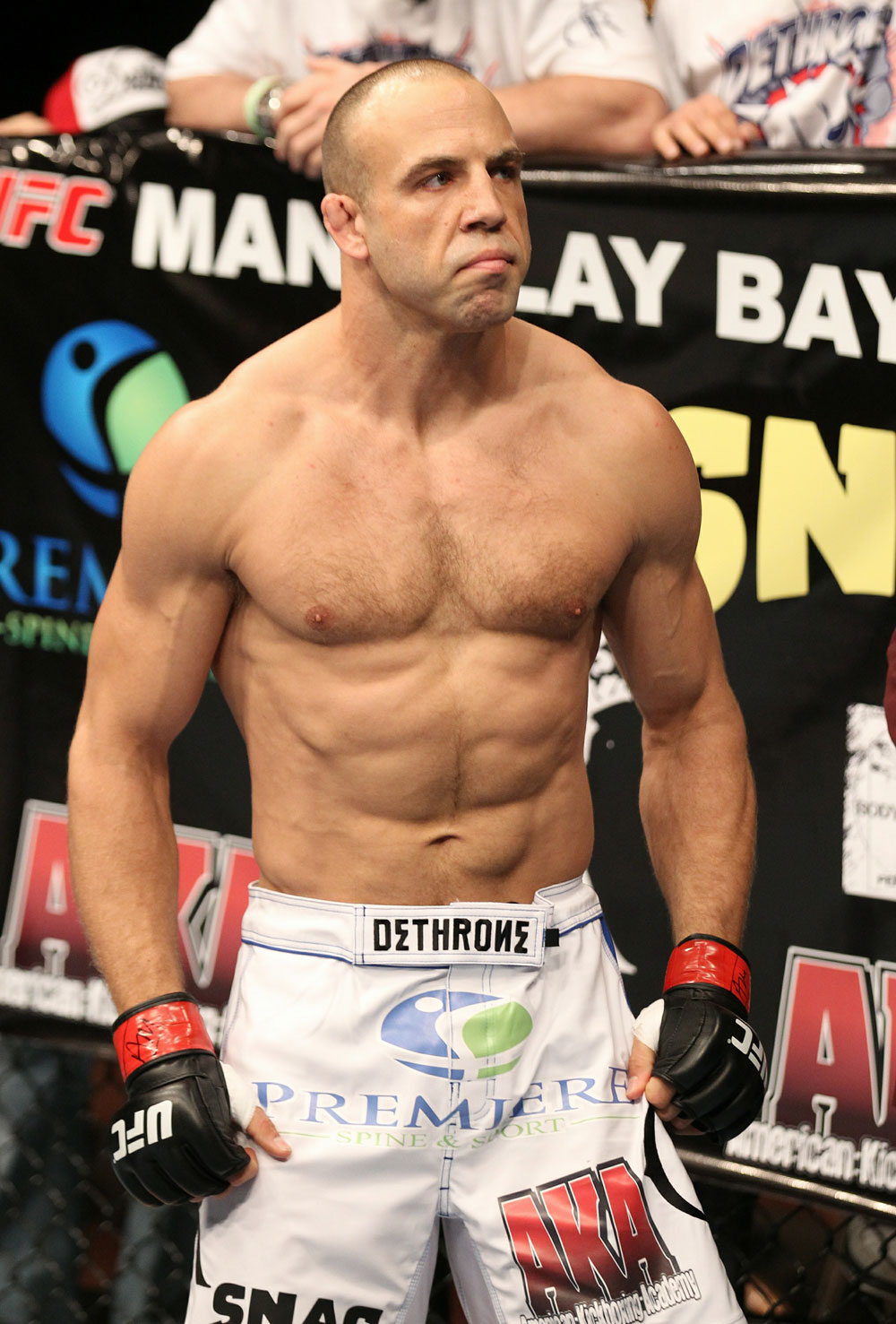 If not for a helmet and a lot of luck, we could have been writing a different story about Kyle Kingsbury right about now. Thankfully, a motorcycle accident earlier this month resulted in a nasty looking scrape on his shoulder and arm, but nothing more, and 10 days after the incident, “KingsBu” was back on the mats at the American Kickboxing Academy, preparing for Saturday’s bout in Nottingham with Jimi Manuwa.

It could have been a lot worse though.

“I was riding my scooter to work and I had a guy pull out in front of me,” Kingsbury recalled. “I was in the far right lane, he was gonna make a turn out of the gas station to cut across both lanes and head in the other direction. He was already halfway in the lane when we noticed each other and he hit the gas, thinking he could make it. I realized I was gonna t-bone him, so I slammed on the brakes and he slammed on the brakes, luckily, and I ended up flying off the front of the handlebars, sliding on my side headfirst. Thankfully I had my helmet on and I kinda slid off to the left in front of his truck.”

With the skin scraped off his shoulder and arm, Kingsbury immediately consulted with his doctor, and she told him that while keeping up his normal training schedule would prolong the healing process, a little over a week worth’s of rest would have him back in business sooner rather than later. He chose the latter option, and with the aid of some Zinc, Vitamin E, and Aloe Vera, in 10 days he was back up to speed to put in three hard weeks before taking the trip to England.

“Initially when she looked, she said the good news was that there were just superficial wounds and there was nothing in the second layer, so with my good diet and everything like that, I should be able to heal quickly,” said Kingsbury. “The thing that she really drove home was that during that first healing process, while I have open wounds, it’s a matter of where my resources go. So if I’m taking all the time to rest and recoup and let my body heal, then I’ll heal much faster. Whereas if I’m going and hitting cardio and weightlifting and doing these other things to stay in shape, those resources my body has are gonna be sent to fix muscle and tendons and ligaments instead of the skin. That made sense to me.”

As of September 20, the only remnant of the crash was a quarter-sized spot on his elbow, and heading into the fight, he says “I’m very happy with the way camp has gone given the circumstances.”

The funny thing is that in Manuwa, Kingsbury will be facing a standup fighter whose main weapons are his fists. And while the Brit has made the necessary moves to make sure he’s up to speed on the ground game before he steps into the Octagon for his UFC debut, odds are that he won’t be looking for the takedown. So maybe not rolling for 10 days wasn’t going to be that big a deal for Kingsbury, right?

“You can’t overlook anybody in a fight, and certainly if he feels, watching my last couple fights, that the easiest way to win is by putting me on my back, then maybe he is gonna try to shoot,” said Kingsbury, whose four straight wins over Razak Al-Hassan, Jared Hamman, Ricardo Romero, and Fabio Maldonado were primarily standup affairs. But the next two bouts, a decision loss to Stephan Bonnar and a first round submission defeat against Glover Teixeira, made it clear that if you wanted the best shot at beating him, you wanted to take things to the ground. And he knows it.

“Something I really have to take into consideration, especially after the Bonnar fight, is that people will be looking to take me down, even if that’s not my forte, just for the fact that it looks like I don’t know what to do on my back,” he said. “And credit to Bonnar, he has a very suffocating top game, and he’s a black belt and a lot of people don’t know that or understand that about him because he doesn’t show that a lot. So people see that fight and it’s a blueprint. So we’ve worked on a lot of things since then to correct that. You didn’t get to see any of my improvement in the follow-up fight with Glover just because I got rocked early and then dropped with that uppercut, but there’s been so much that I’ve been working on and I really feel excited to use it. I felt that way going into the Glover fight and getting rocked early and having the fight go the way that it did, I didn’t feel like I got to display anything that I’ve been working on, so I really feel like the fans and the people that have been watching me are hopefully gonna see a big jump in my game when I come out there against Jimi.”

Before the losses, Kingsbury’s game had jumped up by leaps and bounds since his stint on season eight of The Ultimate Fighter and a December 2008 loss to Tom Lawlor on the TUF8 finale card. When he returned in October of 2009 against Al-Hassan, the progression began to show, but it was in his Fight of the Night slugfests with Hamman and Maldonado, which bookended a 21 second demolition of Romero, that he showed the talent, power, and grit that marked him as a fighter to watch at 205 pounds.

But with every peak there’s a valley, and in Kingsbury’s case there were two, beginning with the loss to Bonnar last November, where what was expected to be a standup war never materialized, drawing boos from the pro-Kingsbury crowd that saw their fighter pinned to the mat for much of the 15 minute bout. Was it least a moral victory knowing that Bonnar respected his standup that much that he took the fight elsewhere to get the win?

“There’s definitely a moral victory,” said Kingsbury. “I’m not the kind of guy that looks back and says there’s nothing to be gained from a loss or that I can’t hold my head high about certain aspects of it. From playing football since I was nine years old, there was always something you could take from a loss that was positive, and I definitely felt like one thing that came good out of that was that he respected my standup. But in the end, I think there were more things weighing on the disappointment level of my strategy and where my head was at mentally in that fight than in the compliment of him not wanting to stand with me.”

As for the May loss to Texeira, Kingsbury was blitzed by the respected veteran and he never recovered. Now, Teixeira is third on the bill on October 13th’s UFC 153 card in Brazil, and casual fans are raving about him as if he fell out of the sky at UFC 146. Of course, the hardcore fans and Kingsbury knew how good he was, but to others, he was just the new guy. The same thing goes for Manuwa, an unbeaten and respected British prospect who is virtually unknown to casual fans. So if Kingsbury wins, he beat the new guy. If he loses, he lost to an unknown. It’s a tough spot to be in for the 30-year-old San Jose native.

“On some level, I thought that in the past, but I think that when your opponent’s truly talented and you can go out there and get the victory, the fans are gonna know about it at some point,” he said. “They’re gonna know what it was worth whether it’s down the road or whether it’s in the next fight. I’ll tell you right now, I was very happy with Glover getting the (now cancelled) Rampage (Jackson) fight (at UFC 153) because I know how talented he is. I think of him as a top ten guy, and I think he would have annihilated Rampage. So there are things like that where you say nobody knows who this guy is, but sooner or later everybody’s gonna know who he is, and it’s like ‘okay, you lost to that guy.’ The same thing goes for a victory. If I go and beat Jimi Manuwa on the 29th and he rattles off three or four straight victories, knocking dudes out left and right, people are gonna know how valuable that victory was. So time definitely does tell, and a quality win is still a quality win whether people realize it or not. Down the road they’ll figure it out.”

And right now, the only destination on Kingsbury’s road is Nottingham, the site of Saturday’s bout with Manuwa. He understands that he may be the bad guy fighting the Brit, and that he may hear some boos from the crowd, but after playing in front of 75,000 people at times as a member of the Arizona State University football team, he knows a little something about big events and being booed.

“I’ve been booed before,” he laughs. “This is something where I think the football will help me. I remember the anger of it, and later I began to appreciate it and I thrived on it. I think if you’re prepared for it, it’s different.”

Kyle Kingsbury is prepared – for the fight, for the crowd, and to move forward and get back on the winning track. It’s a lot to deal with on just one night, but there’s nothing else he would rather be doing.