Kingsbury's Comeback not a Typical One

"The ultimate goal for this fight is to execute and have that empty mind. In doing that, I’ll be successful." - Kyle Kingsbury 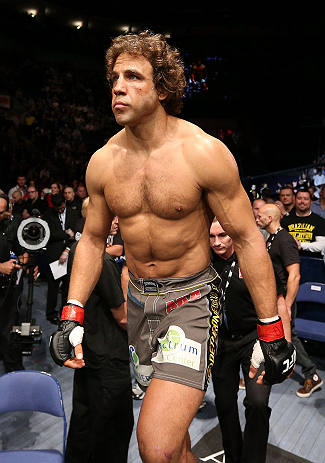 The word “Comeback” is often a dirty one in the world of combat sports. Simply breaking down the word lets you know that if you’re coming back, you must have left, and if you left, there had to be a reason for it.

No one leaves when they’re on top, no one walks away simply because they want a little more time on the golf course. In combat sports, when you leave, it’s usually not by choice.

And when you come back, it’s often for the wrong reasons.

Kyle Kingsbury probably wouldn’t argue with that assessment. After three consecutive losses, the last a punishing TKO loss to Jimi Manuwa in September of 2012, he decided that he needed a break. That self-imposed exile may have saved him from getting cut, but whatever the circumstances, he wasn’t too concerned with public opinion.

The way he saw it, it was time to go.

The former Arizona State University football player had a decent run in the UFC after competing on season eight of The Ultimate Fighter. He put together a 4-4 record, picked up two Fight of the Night awards, and was a much better fighter in 2012 than he was in 2008.

That’s not to say he was satisfied.

“I got in my head so many times in fights, and there are fights I would have lost regardless,” he said. “I don’t think I was on the same page as Glover Teixeira when we fought. Skillwise he’s a seasoned veteran that had really no holes in his game. It took Jon Jones, who’s a freak of nature, to take him out. But as far as (Stephan) Bonnar and Manuwa and some of these other fights, I feel like I could have won those fights had I had my mind right, and really, I just got in my own way.”

After the Manuwa fight though, it was over. And he was okay with that end of his departure. He got a job bartending and bouncing that earned him 25 hours a week and a comfortable living wage, he got engaged to his girlfriend Natasha, and he moved into his mother’s garage, which only cost his $500 a month.

You might wonder how someone goes from the bright lights and the UFC to a life far removed from that, but it all made sense to Kingsbury.

“There’s a certain benefit to being simplistic,” said Kingsbury. “For my second Fight of the Night (against Fabio Maldonado), I moved out to Arizona, I had a house with my ex-girlfriend and it was nice. We had a lot of things going on, we both had cars, one was paid off, and it was nice to have all that, but the pressure to maintain that is so much and it changes the way you think about the fight.”

He describes his mindset going into his UFC 139 bout with future Hall of Famer Stephan Bonnar in 2011 as one where all he thought about was getting Fight of the Night and another bonus check.

Bonnar took Kingsbury down, kept him there, and won a clear-cut decision. The loss snapped a four-fight winning streak and began the three-fight skid that prompted him to walk away from the sport.

The itch always returns though. For some, that’s bad news. For Kingsbury, who at 32 is still in his physical prime, it was inevitable. Not that it was a quick process.

“I spent some time figuring out if I wanted to fight again, and the more I learned about dealing with issues and just enjoying life and being calm and dealing with everyday problems, the more I wanted to test out that new found knowledge. And there’s no better place to test the ability to remain relaxed than when you’re inside the cage.”

Some would disagree with that statement.

It’s far from a typical reason for fighting, and when I told him that I thought he was coming back to face Patrick Cummins this Saturday in San Jose because he missed punching people in the face, he explained that his motivation used to be just that, but it isn’t anymore.

“When I started fighting, all I wanted to do is beat people up,” said Kingsbury. “I had all this anger inside and I wanted to destroy people. You can hear some of the young guys talk that way in interviews, and now, it’s about me. It’s about sharpening me and sharpening my spirit and applying all those things that I learned and really just seeing if I can go in there on an even keel and just empty my mind and be one hundred percent present. And if I can do that, I anticipate success.

“The goal now isn’t about wins or losses; it’s about can I do everything correct in my mind, face all my fears and push them aside right as I step in there at home, in front of the crowd again, in front of everyone on FOX TV, and against a very, very game Pat Cummins?”

Can he, in his backyard in San Jose, after nearly two years off, and against a hungry prospect trying to make a name for himself? Those are a lot of questions to be answered in one fight, but while the mental game must be worked on alone, the rest of it has been handled just fine by two of the Octagon’s finest.

“This whole time I’ve been sparring and training, anytime I went with anyone other than Cormier and Cain (Velasquez), I whipped their ass; I did great, like I’m supposed to because I’m in the UFC. Anytime I went against Cormier or Cain, I got my ass kicked like I’m supposed to because these guys are the heavyweight champ and the number one contender. And the truth is, every time I’ve had my ass kicked by Cormier, he’s exposed some of my weaknesses in my wrestling, he’s exposed things that I need to get better at, and then we worked on that and I’ve improved. Those beatings that I’ve received this camp have been a tremendous help to me.”

Only a fighter will say that, and even though Kingsbury doesn’t want to be defined by what he’s going to be doing on Saturday night, he accepts that for 15 minutes, he will be just that. But what’s the end game for him? Titles, money, a nice run at the 205-pound elite? All of the above?

“My ego wants a run,” he said. “My ego wants to think that I’ve learned all this stuff, I train with the best in the world, I was beating myself in the past, now I’m just going to go on a tear and march straight to the title shot. The reality of it is, in order for me to get what I want, which is the win, I have to be one hundred percent present every day. I have to be right here in the moment, and if I look too far ahead, then I’m not executing right now, and that’s been a testament to my accomplishments in this training camp – the ability to stay focused on what I’m doing this very day and right now. So the ultimate goal for this fight is to execute and have that empty mind. In doing that, I’ll be successful. From there, the ball keeps rolling, and if that starts to snowball and turn into something big again, then hopefully I will have learned enough to remain in the present and not let anything else blow me out of whack.”

Sounds like Kyle Kingsbury has figured a lot of things out that he didn’t have in order back in 2012. But as he makes his return to the Octagon in a lot different place – physically and metaphorically – than he was nearly two years ago, is he happy?

“With one thousand percent certainty, I can tell you I’ve never been happier in my life,” he said. “I’ve never felt like I had a better head on my shoulders, and I’m surrounded by great people. I’m very privileged to have the life that I have.”