The King's Tough Road to the Crown 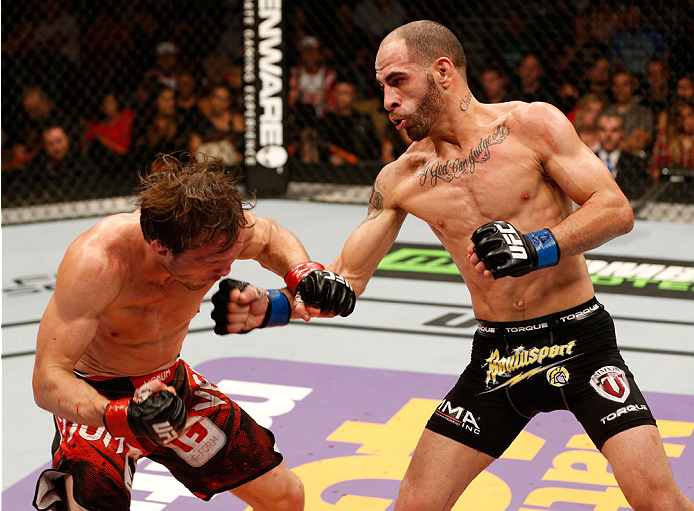 Chico Camus wants the big fights. And “The King” is getting them.

When the UFC signs a fighter, they are guaranteed the opportunity to tangle with the best and baddest of their weight class and, possibly, to travel the world while doing it. For his last scrap and his next one, Camus has gotten the chance to do both, as he took on undefeated rising star Henry Cejudo in Mexico City in June and this Saturday he will be taking on former UFC flyweight title challenger Kyoji Horiguchi in Japan.

There’s no easy road to the top. Camus knows it and that’s why he loves being in the UFC.

“I’m either looking at it as the UFC wants me out (laughs) or they thought I did good against Cejudo and they’re giving me the opportunity to fight another top guy and get back what I thought was mine in the first place,” Camus said. “Kyoji is very tough. The UFC definitely didn’t hold back. I think I always get tough fights, though. I think it’s the luck of my draw and I like it that way. I’m in the best sport in the world and I believe I’m training with the best guys in the world, so I like the UFC giving me a top guy like this. I’m going to come out and fight like how I fight. I learned from the Cejudo mistake, and I’m not going to let a guy hold me around, but Kyoji’s not like that. I’m excited and looking forward to the matchup. I’m looking to come out and, hopefully, put this guy asleep. I’m looking for a finish. I haven’t gotten a finish yet in the UFC. I’m definitely working for it and training hard for that.”

Since dropping to 125 pounds, the 30-year-old who was born, raised and currently trains in Milwaukee has been thrown into the division’s deep end. In his flyweight debut, Camus earned a decision win by going toe-to-toe with the hard-hitting Brad Pickett in Austin, where The King was a little too fast sticking and moving for “One Punch.” Most recently at UFC 188, Camus battled former U.S. Olympic gold medalist Cejudo to a decision, which the judges saw in favor of his opponent.

While he didn’t agree with the outcome, there was a lot of food for thought for Camus from the Cejudo clash. First, Camus’ takedown defense at flyweight is stellar, as he stuffed 14 of Cejudo’s 15 attempts. Second, he cannot trust the scorecards wherever, whenever. Third, Cejudo claiming food poisoning as the reason why he didn’t perform as well as usual - that doesn’t sit well with Camus and he wants another shot at the vaunted grappler down the line.

“I was expecting to be put on my ass, to tell you the truth,” Camus said. “With him being a gold medalist in Olympic wrestling, I was expecting to be fighting off of my back at least a few times throughout the fight. And that didn’t happen. I think that says a lot about me. He tried to bring up the ‘bad taco’ and he was fighting at 60%. To be honest, I think that’s BS. He felt strong. I think the ‘bad taco’ was him fighting a solid opponent who wasn’t going to let him do what he’s done to every other opponent. He kind of walked through every opponent he’s fought in the UFC, just taking them down and beating them up. Since he wasn’t doing that to me, I believe he brought up a ‘bad taco’ because I was a tough opponent. He tried to take a lot away from me. Henry’s a good guy, but I think he’s trying to discredit how good we fought each other. I mean he’s an Olympic gold medalist wrestler and he tried 15 takedowns on me and I believe he maybe got one, but I wouldn’t even count that as a takedown. ‘Bad taco’ or not, if I’m an Olympic gold medalist wrestler, I’m taking you down at least five or six times.”

How does one shut down an Olympic wrestler’s takedown game for 15 minutes? One trains with his own Olympic wrestler, a bigger one to boot. Camus is a proud product of Milwaukee’s famed Roufusport gym, which is known for UFC talent like Dustin Ortiz, Erik Koch and, of course, former UFC lightweight champion Anthony Pettis. The team’s coach on the mats is former US Olympic freestyle wrestler, former two-time NCAA Division I National champion wrestler and undefeated MMA pro at welterweight Ben Askren. Besides a litany of young fighters and Askren pushing him to the limit, Camus believes he can rise to the occasion no matter how tough the challenge is inside the Octagon.

“I just train my butt off,” Camus said. “That was a huge opportunity for me. I think if I beat Cejudo, I’d be in position to fight Jussier Formiga, and then if I won that, then fight Demetrious Johnson for the belt. I just prepared really, really hard and it’s with the best guys in the world. I believe I have the best wrestler in the world on my team in Ben Askren. Going back to Cejudo, if you shoot 15 times and not get something, if Ben Askren shot 15 times on somebody and they stuffed 14, that’s not going to happen. He’s an Olympic wrestler as well. I train with some of the best guys. They work me and put me through hell in the training camp and it showed in the fight. I wasn’t going to let him walk over me. The first time he tried to grab me for the takedown and he felt how strong I was and how my hips work, at that point he knew he was going to be in for a long day. That’s why he made it sort of boring fight just trying to put me against the cage and barely landing anything. I thought I did really well and the judges saw 30-27 and I thought that was really wrong.”

Up next, Camus flies to Japan for a showdown with Horiguchi. After going 4-0 inside the Octagon, Horiguchi got his shot at the strap in April, but found himself on the wrong end of another technical masterpiece by UFC flyweight champ Demetrious Johnson. Besides the loss to “Mighty Mouse,” Horiguchi is a 125-pound knockout artist with a 15-2 pro record including nine striking stoppages. The Krazy Bee product’s weapon of choice is his punch and lots of them, which should make for a fan-friendly stand-up duel between Horiguchi and Camus.

“He’s a big puncher and he’s going to go for the finish as well,” Camus said. “He throws really hard and he’s really good everywhere - he went five rounds with the champion. He got tapped out with one second left, but he’s a very tough opponent. I’m looking forward to the opportunity to show the UFC that I’m a contender at 125. I can hang with the best of them. I want that title, so I’m training every day for him and I’m looking forward to that stand-up battle. I’m not afraid to fight wherever it goes. I’m pretty good wrestling, I’m pretty good on top and off my back on the ground. I’m just looking forward to getting in there and tangling with him and seeing what the outcome will be.”

If he needed extra motivation for this meeting, Camus’ oldest son Armani will be turning 10 while his dad is fighting in Japan. While his boys - Armani and Isaiah - celebrate at home, Camus aims to give his best performance yet as a birthday gift, to make a statement in the division and to get himself even tougher fights in the future.

“It’s going to be one of the first times that my job actually is getting in the way of life and raising my kids,” Camus said. “It’s pretty hard to tell your kid that you’re not going to be there for his birthday. But when the opportunity calls, I have to do what I have to do. He understands and I love him for that. Hopefully, I can go out there and put this guy to sleep. And $50,000 would change my life. That sounds good. I’m not a Fight of the Night guy, but I’m definitely a Performance of the Night guy. And I want to go out there and show the world who Chico Camus is. I want to show the world that I’m chasing the gold.”