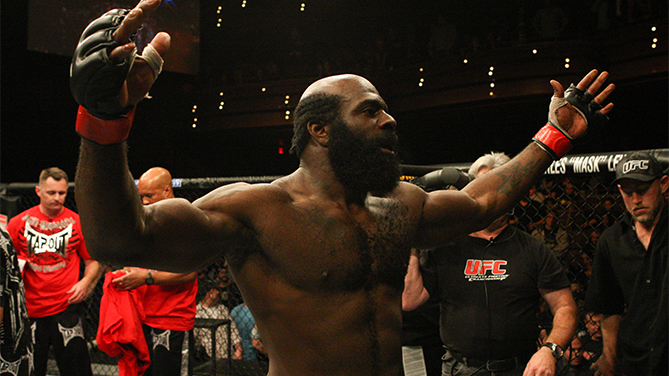 In combat sports, everybody loves the knockout artist. So it was never any surprise that everybody loved Kimbo Slice, who passed away Monday night at the age of 42.

Born Kevin Ferguson, the Bahamas native and longtime Florida resident didn’t arrive in the fight game through conventional means, but once he was here, fans didn’t want to let him go, and for good reason.

Kimbo was an internet sensation who introduced himself to the world through a series of streetfights that blew up YouTube, and even when he moved to sanctioned combat in the worlds of MMA and boxing, he maintained and even surpassed his initial popularity not just through his fighting style, but through his attitude and quiet charisma. Kimbo wasn’t someone who put himself above everyone else. He was everyman.

“I’m a God-fearing man, and regardless of what people see and how they judge me, I pray to my Lord and savior every day,” he told me in 2009, shortly before his UFC debut against Houston Alexander. “I’m raised by my mother, I’ve got kids, and I keep it real in every way whatsoever. I’m the same guy as the guy that shops at K-Mart. They go in Winn-Dixie, I’m in Winn-Dixie, they go in Publix, I’m in Publix. Then they see me on TV and it’s like ‘there’s that guy again,’ and they feel like they can relate to that. I’m one of theirs. The guy they see on TV, the guy they like so much, and the guy they see on the internet is the same guy who shops where they shop. They can pat me right on the shoulder and say ‘hey, what’s up man?’”

A member of the Ultimate Fighter season 10 cast, Kimbo arrived in the world of the UFC after four bouts in the Elite XC promotion that saw him go from internet curiosity to mainstream star. That popularity only skyrocketed once he was in the nation’s collective living room every week, and his TUF 10 fight with Roy Nelson set viewing records for the series. It also put a human face on the intimidating figure ready to scrap behind the mantra “ALL DAY.”

“It’s just like when you were a kid with your parents, depending on what type of parents you had, but definitely your teachers, they kinda teach you to never judge a book by its cover,” he explained. “I guess I was the complete opposite of everyone’s impression of me. They kinda judged me before they even got to know me, but I didn’t go into the house trying to portray someone that I’m not. What you see is what you get, camera on or camera off, I’m a real dude. My kids know that about me, my friends know that about me, and putting me in that house and after putting the cameras on us 24 hours a day, now the fans are able to know that about me. I’m a real guy. The same guy you see in the street, that’s the guy you saw in the house. And that’s one of the things that people are able to relate to. I’m not phony.”

He wasn’t phony. Kimbo was as real as it got, and that applied to his fighting style as well. Yes, he picked up some of the finer points of MMA under the tutelage of American Top Team and Bas Rutten, but at his heart and soul, he was a brawler whose sole intention was to score a knockout. This irritated some purists of the sport, but what purer fighter can one be than one who remains true to himself and what got him to the dance?

“Just let it play,” he said. “Let the cameras roll and don’t move from your seats because somebody’s getting knocked out. I’m coming in to knock this dude out or to be knocked out. And that’s the fun part of it. I’m not afraid to be hit. I’m not afraid to get knocked the hell out, wake up a few minutes later, well-rested, shake his hand and say ‘Hey man, good fight, I’m still a big fan of yours,’ or however it goes. I’m coming to fight, and that’s what you get with me. I’m coming to knock someone out.”

That was Kimbo Slice, who defeated Alexander in his UFC debut before losing to Matt Mitrione six months later in his final UFC bout in 2010. He only fought twice more in MMA, most recently in a Bellator bout against Dada 5000 in February. That he was still actively competing four months ago made his sudden death all the more shocking to his teammates, his fans, and most importantly, the family he loved.

But he won’t be forgotten.