South Korean welterweight contender Kim Dong Hyun not only made his case for inclusion in the title picture Saturday at Cotai Arena in Macao, China, but he also delivered an early Knockout of the Year candidate with a stunning spinning back elbow finish of John Hathaway that ended their UFC Fight Night main event in the third round.

“There's no stopping. I’m going to continue to go forward, forward, forward,” said Kim, winner of four straight, including back-to-back knockouts of Hathaway and Erick Silva. “I don’t care who it is, I want a shot at the title.”

Kim went right after Hathaway to begin the fight, and while he ate a couple hard knees to the body for his trouble, a right hand rocked the Brit and immediately put him in trouble. Shaking off the effects of the blow, Hathaway got a takedown, but Kim got right back up, rocking Hathaway briefly again. To his credit, “The Hitman” used the clinch to regroup, and two minutes in, he began to stand and trade with Kim again. Both fighters had their moments, but the harder shots were being landed by “The Stun Gun,” who dropped Hathaway with a left hand and proceeded to rain down shots from the top position. Again, Hathaway fought his way out of trouble, making it to the bell fairly unscathed.

Hathaway bounced back nicely in the second round, drawing roars from the crowd as he chased after Kim with strikes and locked him up against the fence. Kim’s left was continuing to be a serious weapon though, and he got Hathaway’s attention with it repeatedly. The Korean also scored a takedown with a little over a minute left, keeping Hathaway pinned to the mat from side control for the rest of the round.

The fight ended suddenly in the third round though, with Kim knocking Hathaway out with a flush spinning left back elbow. The Brit was out as soon as he got hit, with referee Leon Roberts immediately stepping in at the 1:02 mark

In one word, wow.

Kicks were the order of the day as the bout opened, with neither fighter taking a clear lead. But 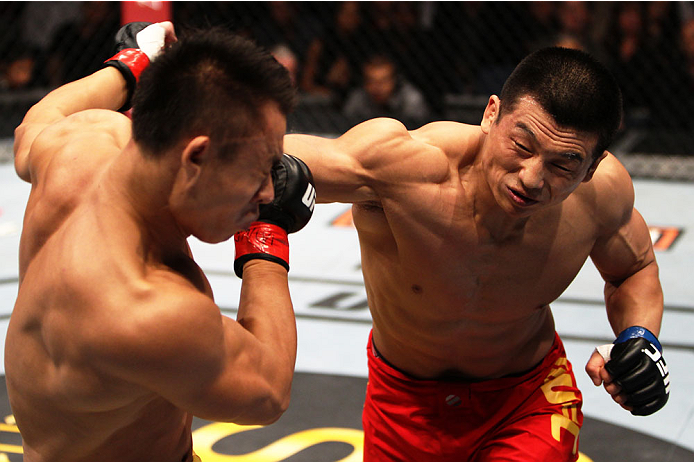 after the crowd began booing, Wang went on the attack with his fists, leading Zhang to take him down and take his back. Zhang sunk in a rear naked choke, but Wang was able to get free and reverse position. From the top spot, Wang threw several punches as Zhang looked for a submission from his back, and he almost got a triangle, but it was Wang who ended up taking his opponent’s back as the round ended.

The grappling battle continued in the second, only interrupted by and illegal knee by Wang that drew a warning from referee Jerin Valel. Zhang stayed largely in control, but just when things seemed to be at their worst, Wang would find a way to escape and recharge, and he finished the round in a dominant position on the mat once again.

Pushing hard for the win, Wang turned a Zhang takedown attempt into a reversal where he took his foe’s back, but the two would go on to trade reversals, Wang ending up on his feet, where he threw kicks at the grounded Zhang’s legs. Eventually, Wang joined his opponent on the mat again, and he remained the busier fighter until Valel stood the two for the final seconds of the bout.

Matt Mitrione bounced back from his September loss to Brendan Schaub in impressive style, knocking out fellow heavyweight prospect Shawn Jordan in the opening round.

The big men of MMA wasted no time throwing bombs, with Jordan (15-6) getting in a nice shot early on, while Mitrione (7-3) largely went wide with his punches. Mitrione eventually started to get into a rhythm, but Jordan was still the more accurate of the two, especially in close-range exchanges. In the final 20 seconds, Mitrione hit paydirt with a left hand, and the former Purdue Boilermaker turned up the heat, unleashing strike after strike until referee Dan Miragliotta stepped in just before the end of the first round.

In the main card opener, featherweight standout Hatsu Hioki got a much needed victory, taking a hard-fought three round unanimous decision over Ivan Menjivar. 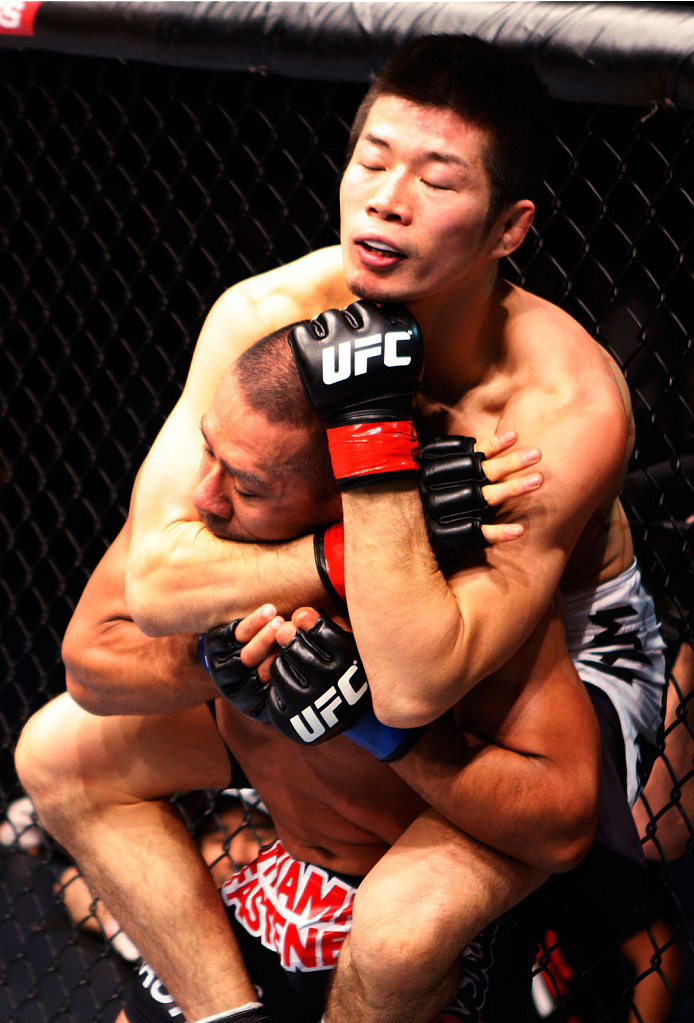 After some positive early moments from Menjivar, Hioki locked up his veteran foe and went took his back while standing, attempting to get a rear naked choke. Menjivar defended well and with two minutes gone, he got loose. Hioki was able to get a takedown with a little over 90 seconds remaining, and a minute later, he passed Menjivar’s guard and looked for an armbar, then a kneebar, before the bell rang.

Hioki kept Menjivar off-balance in the second by switching stances in the stand-up game, a problem alleviated when “The Pride of El Salvador” locked up his opponent. Hioki responded well with a takedown, and again he went hunting for submissions, just missing with an armbar and triangle. Yet even though Menjivar was able to survive, he wasn’t able to get free long enough to mount any offense of his own.

Menjivar finally found his range in the final round, dropping Hioki with a right hand and cutting him over the left eye. The Tokyo product shook off the effects of the blow, but fatigue was definitely becoming an issue as the bout entered its final two minutes. Menjivar wasn’t able to capitalize on his early success though, even though a kneebar attempt in the closing seconds must have given Hioki some nervous moments.