Kiichi Krushes, Subs Sarafian in One

Read on for UFC 174 prelim results 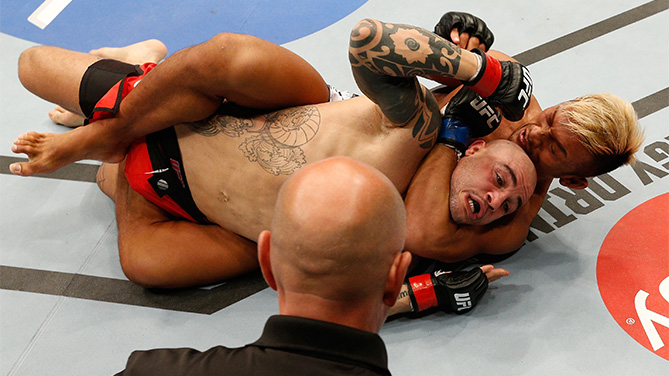 After Sarafian had some success with his stand-up as the round opened, Kunimoto closed the distance and after taking the Brazilian down, he closed the show, sinking in a rear naked choke during a scramble that produced a tap out at the 2:52 mark.

Both Phillips and Letourneau threw caution to the wind in the first round, with Canada’s Letourneau showing the better technical stand-up but Phillips clearly having the heavier hands, as witnessed by the right hand that raised a welt under her opponent’s left eye, nearly shutting it by round’s end. Letourneau did score with a nice kick to the head late in the frame though, kicking off a toe-to-toe exchange that ended the first five minutes.

Despite dealing with her left eye closing, Letourneau dominated round two with crisp and varied striking on the tiring Phillips, and she kept the heat on in the third, courageously tossing adversity to the side to pick up her first UFC victory.

With the win, Letourneau improves to 6-3; Phillips falls to 4-2.

All three judges saw it 29-28 for Jabouin, who had lost two of his previous three bouts. 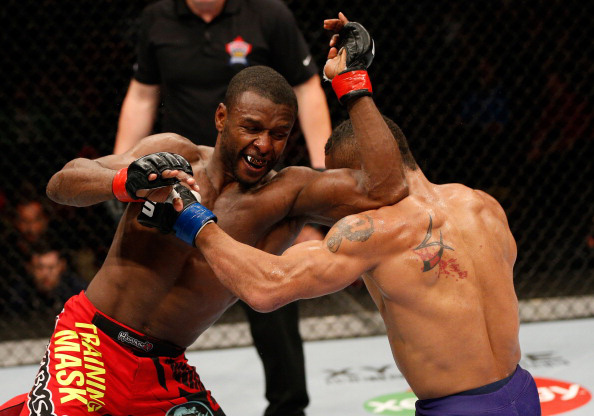 After taking an early eye poke from Jabouin, Easton went on the offensive, rocking Jabouin with overhand rights until the Canadian sought – and got – a takedown. Jabouin smothered Easton but did little else, keeping his opponent grounded. With a little over a minute left, the two rose and Easton got a takedown, but Jabouin defended well and the fighters took it back to the feet again.

Jabouin dominated the second round everywhere, scoring well on the feet and also keeping Easton guessing with takedowns and solid – if less than compelling – ground work.

Easton had his moments in the first half of round three, but a Jabouin takedown put an end to that rally. Easton tried to lock up his opponent’s arm in response, and the Maryland product stayed busy throughout, but it wasn’t enough to turn the fight around for “The Hulk,” who falls to 13-5 with the loss. Jabouin improves to 20-9.

Burns Lake, B.C.’s Kajan Johnson waited a long time for his UFC debut, but it was South Korea’s Tae Hyun Bang who left the Octagon with the victory in their lightweight bout, knocking Johnson out in the third round of an entertaining scrap.

Johnson had some success with his stand-up early, but Bang was like a tank, seemingly unable to be hurt as he marched forward. With 2:45 remaining, he dropped Johnson with a left hook, yet the Canadian recovered quickly and got back to his feet. The trading of hooks on the inside wasn’t going to be good for Johnson though, so he began mixing up his attack, jarring Bang with a knee and then taking him down in the final minute.

Johnson avoided serious trouble in round two, but with the tiring and bloodied Bang still dangerous on the feet, the former TUF Nations semifinalist took matters to the mat when he could, allowing himself to stay in position to win the fight.

Bang wasn’t going to be denied though, and after Johnson went to the striking well one too many times with a right kick to the head, the Seoul native caught it and nailed his foe with a flush right to the chin, putting Johnson down and out at 2:01 of the third round.

The unanimous decision read 30-27 across the board. 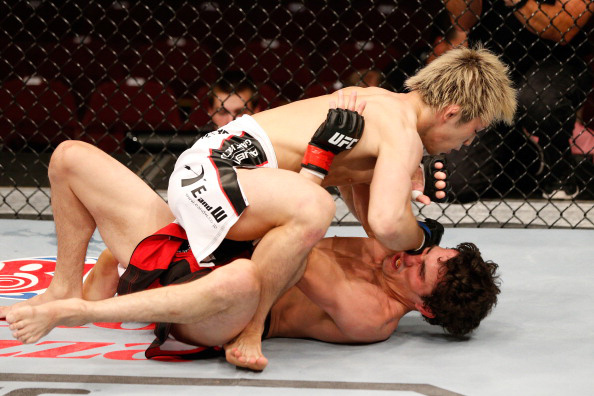 A trip to the canvas in the opening stages of the fight almost proved costly for Tanaka, as Delorme went to work on a submission as the two battled on the mat. As the round progressed though, the position remained the same but the tide changed, as Tanaka fired off ground strikes from the top, finishing the round strong.

Tanaka slowed things down in the second, putting together a winning frame as he kept the Canadian grounded for much of the five-minute period.

Appearing to do more of the same in the final round, Tanaka got reversed briefly by Delorme on the mat, drawing a roar from the crowd. But by the midway point, Tanaka was back on top and back in control, bloodying his foe and nearly sinking in a rear naked choke before the final horn.

Prince Edward Island’s Jason Saggo kicked off the night in a big way for Canadian fans, stopping fellow Octagon newcomer Josh Shockley in the first round of their lightweight bout.

With Saggo (10-1) in control on the ground from the time he threw his foe to the mat early on, Shockley (11-3) had no answers, and with time ticking away in the opening frame, Saggo turned up the heat, with a series of unanswered strikes prompting referee Jerin Valel to halt the bout at the 4:57 mark.