Khama Worthy made up his mind early in his career that he was going to be a prizefighter
By Thomas Gerbasi, on Twitter: @TGerbasi • Apr. 15, 2020

Khama Worthy had it all figured out. He had left Pittsburgh for New York City to become a model, but he came back with every intention of being a prizefighter, and his goals were crystal clear even before he stepped foot in a gym.

“I'm pretty sure I'll be fighting BJ Penn in two years,” Worthy told his older brother while the two watched some MMA.

“You're an idiot. You have no idea what you're getting into.”

Worthy was undeterred, even though this was the 2009 BJ Penn who was ruling the 155-pound division of the UFC with an iron fist.

“I'm gonna go down to my gym, beat the guy up who's in charge there and they're gonna end up getting me a fight with BJ Penn in a year or two,” said Worthy, who then went down to the Pittsburgh Fight Club to show what he had. He told the man who would become his first coach, Eric Hibler, that he wanted to be a professional fighter. Hibler said fine, then put Worthy in with one of the regulars in the gym.

“I got my butt kicked,” laughs Worthy. “He kicked me in my leg and I never felt pain like that before. You think you know pain until somebody kicks you in your sciatic nerve and your body starts thinking, 'What are you doing there?'”

It was the tough love he needed. Some folks leave the gym right then and there, never to return. Worthy returned day after day, determined to become a pro fighter. He never got to BJ Penn, but he is in the UFC, where he made quite the impression in his short notice debut last summer, as he knocked out highly touted prospect Devonte Smith in the first round.

The win and the Performance of the Night bonus were nice, but it wasn’t all joy for the nicest guy in MMA dubbed “The Death Star.”

“I don't ever want to fight a friend again,” said Worthy, who counts Smith as a buddy. “It's not a good feeling and I just don't like it. You're setting him back. I want my friends to be successful and I'm not just setting them back; I'm taking their dreams away, and that's a f**ked up feeling to do to someone. It was a rough thing I didn't really enjoy doing at all. And it sucked because it's my first UFC fight and I couldn't really enjoy the fight because I really felt bad for my man.”

It's understandable, but there is a silver lining in getting a fight with Smith over with.

“Right now, I ain't got no other friends in the UFC,” laughs Worthy, who was scheduled to face Michael Johnson on the postponed UFC 249 card. Now he waits for a phone call to return to action, but as the owner of his own gym, The Academy of Martial Arts and Fitness, he can train whenever he wants, and when he’s not staying ready, he can reflect on a wild ride that took him through the ups, downs and sideways of the fight game in between his desire to fight “The Prodigy” and his knockout of Smith.

“I've been putting in work for over ten years and sacrificing and dedicating my life to this sport and missing things,” he said. “It's fighting first and everything else has always been second. Now I'm reaping the rewards of that.”

They’re rewards he didn’t know if he would ever see, at least not at the UFC level. 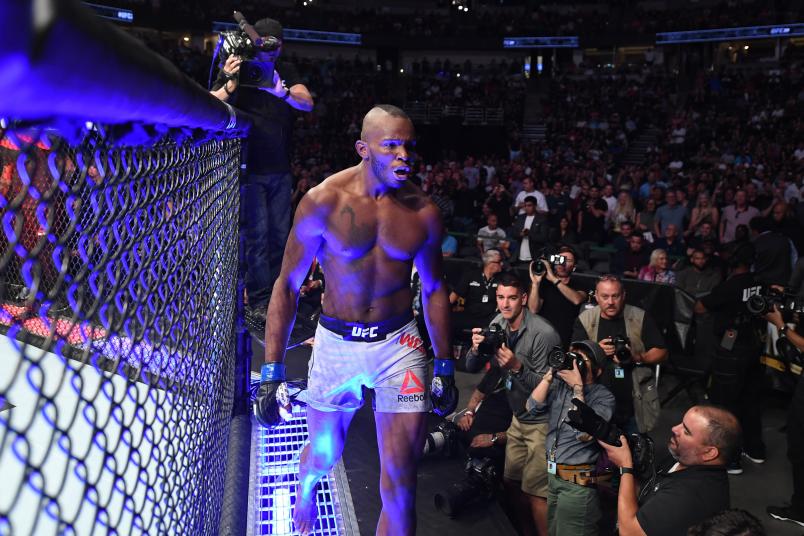 ANAHEIM, CALIFORNIA - AUGUST 17: Khama Worthy celebrates his TKO victory over Devonte Smith in their lightweight bout during the UFC 241 event at the Honda Center on August 17, 2019 in Anaheim, California. (Photo by Josh Hedges/Zuffa LLC/Zuffa LLC via Getty Images)

ANAHEIM, CALIFORNIA - AUGUST 17: Khama Worthy celebrates his TKO victory over Devonte Smith in their lightweight bout during the UFC 241 event at the Honda Center on August 17, 2019 in Anaheim, California. (Photo by Josh Hedges/Zuffa LLC/Zuffa LLC via Get

A pro since 2012, Worthy was 1-2 after his first three bouts, the second loss coming at the hands of lightweight contender Paul Felder. He soon got on track, winning his next six fights, but a 2-4 stretch would follow, leaving him with a 9-6 record and not a lot of positive options careerwise.

“I was trying to understand how I approach the fights,” said Worthy, who hadn’t yet figured out the balance between taking every fight offered and taking the right fights. “When I fought Billy Q (Quarantillo), I was a on a six-fight winning streak and I was with this manager and all he was talking about was UFC, UFC, UFC. So that's all my brain thought about. Then I fought Billy Q and I lost and I wanted to bounce back really fast, so I took the fight with Matt Bessette on short notice and I lost that one. Then I questioned things a little bit, but my teammates told me I probably shouldn't have taken that fight. It was too close behind the last one, and you need to take the right fights.”

Cutting to 145 pounds was becoming an issue, too, prompting him to make the permanent move back to lightweight. Yet despite a five-fight winning streak that brought his record to 14-6 last summer, he was being realistic with himself that the odds of a 33-year-old with that slate being brought to the UFC as a prospect in one of the sport’s toughest divisions weren’t great.

But when Smith lost John Makdessi and Clay Collard as opponents in rapid-fire fashion for his UFC 241 bout in Anaheim, Worthy got a phone call. He answered, and he said yes. Sometimes that’s all it takes to change someone’s life.

It changed Worthy’s. Now he’s in the big show, his name is recognized by fans who didn’t know him a year ago, and he’s eager to put his experience to the test against all comers at 155 pounds. And as wide-eyed as he was back when he started to get his feet wet in the sport, today, he’s a veteran who takes an old school approach to his craft these days. It’s an attitude he probably wouldn’t have had if he got into the UFC in two years as he expected.

“You have no idea how to come back, you don't know how to scrape yourself off the floor when you've been hit by a Mack truck,” said Worthy of the valuable lessons he learned on the regional circuit. “You need to train. These people are building their brand and all this other s**t and then they go out into a fight and they’re gonna get their face scraped off the floor by some guy who doesn't know how to do anything but kill them.”

Worthy laughs, recalling that when he started training, there wasn’t YouTube available to scout opponents, no Twitter battles, and no sponsors for amateur fighters. Oddly enough, maybe it all played out the way it was supposed to.