Khama Worthy is Ready for His Encore

Khama Worthy is preparing to continue his win streak when he makes his sophomore UFC appearance at Saturday's Fight Night
By Zac Pacleb, on Twitter: @ZacPacleb • Jun. 24, 2020

As a 20-year-old model living in New York, mixed martial arts weren’t really on Khama Worthy’s radar, but once someone at a gym asked him to check it out, he decided that was going to be his career.  And though fighting and modeling might live on opposite ends of the occupation spectrum, nothing quite matches the cocktail of swagger and naivety that accompanies young adulthood.

While diving headfirst without full understanding is admirable, Worthy quickly learned the many levels that come with the fight game.

“If someone would’ve told me what I had to go through in order to get there and just to get to where I’m at now, I probably would’ve said, ‘No, thank you,’” Worthy told UFC.com. “I came back to Pittsburgh, (and) I told my older brother - I’m a real chill, real non-confrontational type person. That’s just how I am. When I told my older brother I was going to be a fighter, he was like, ‘Dude, you have no idea what you’re getting into.”

His road to the UFC was by no means a fast track to the highest level. Two months shy of his 32nd birthday, however, he got his shot and made the most of it, scoring a short-notice, first-round knockout over the ultra-hyped Devonte Smith at UFC 241.

“Everything just fell into place,” Worthy said. “I was just super geeked about it.”

On first glance, it was hard to tell what Worthy did to viciously stun Smith, but looking closely, a pair of sneaky counter shots found their home on Smith’s chin and temple.

Worthy was now a UFC winner and performance bonus earner, and it was the product of a trait discovered on his first day in the gym.

“I have a very herky-jerky form of timing and understanding of length and space,” Worthy said. “I tell people I’m like f****** Doctor Strange. Doctor Strange isn’t your typical superhero. His things are just different, just odd. They’re not proper, and that’s just how my fighting style is. Even my first UFC fight, that didn’t look like a hard punch or anything, but it was. That’s just how I am.”

After his memorable debut, he was eager to get back in the Octagon for an encore performance. A couple of bouts in the following months fell through, but things were headed in the right direction when the Pittsburgh-based Worthy got a call to fight in Brooklyn at UFC 249, the card that was ultimately pushed back and rescheduled in Jacksonville due to the coronavirus pandemic.

Worthy didn’t compete on that May card, but he finally gets his chance to make magic happen once again when he fights Luis Pena on June 27.

The owner of the gym at which he originally started training, Worthy hasn’t had too much of an issue with access to equipment and space to prepare for the fight, but as the father of four children, the pandemic-induced lockdown came with its own challenges.

“My girl is teaching from home while I’m trying to run a gym and train, so I’m ultra-busy,” Worthy said. “I’m mad because teachers are always telling me my kids are awesome, and now I get a little taste of them like, ‘No, they’re not awesome. Stop lying to me.’”

Joking aside, Worthy has also reckoned with what he called “the awakening” across the country, as people protest police brutality and racial injustice in the wake of the killings of Ahmaud Arbery, Breonna Taylor, George Floyd and countless others.

Worthy’s mother homeschooled him, and because of that, Worthy said he learned about a lot of American history not traditionally taught in public schools such as the Tulsa race massacre of 1921 and the perceptions of Malcolm X and Martin Luther King Jr. in the midst of the Civil Rights Movement. What he sees going on now is the nation trying to “cure itself,” and he remains hopeful for positive change in the future.

“I think that in the long run, this will be a step forward for human rights because it isn’t just America,” Worthy said. “This is worldwide. Classism and racism and sexism and all that, that goes past America. It goes all around the world, and I think what’s going on right now is waking people up. It’s just making people not turn a blind eye to things.” 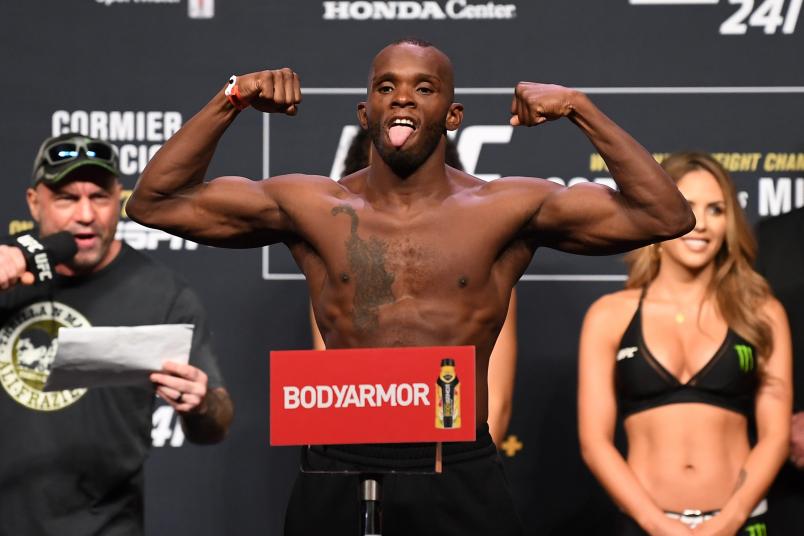 ANAHEIM, CALIFORNIA - AUGUST 16: Khama Worthy poses on the scale during the UFC 241 weigh-in at the Anaheim Convention Center on August 16, 2019 in Las Vegas, Nevada. (Photo by Josh Hedges/Zuffa LLC/Zuffa LLC via Getty Images)

ANAHEIM, CALIFORNIA - AUGUST 16: Khama Worthy poses on the scale during the UFC 241 weigh-in at the Anaheim Convention Center on August 16, 2019 in Las Vegas, Nevada. (Photo by Josh Hedges/Zuffa LLC/Zuffa LLC via Getty Images)

With that in mind, Worthy said he is “honored” to compete in this moment and excited for the challenges Pena presents. Moreover, given that he’s been “in camp” for the better part of the last eight months, he’s just happy to have an end-product to all his work.

Pena, who holds a 4-2 record in the Octagon, is someone tabbed as a fighter with plenty of potential to go along with an equally distinct nickname, “Violent Bob Ross.” Beyond the names though, his unique frame for the lightweight division (6-foot-3 with a 75-inch reach) presents an intriguing mystery for Worthy.

“He’s definitely a puzzle that I have to sort of figure out, and I’m super geeked on working on that,” Worthy said. “Not overthinking it too much because I don’t really like to overdo and think into what my opponents can do, but understanding the difference between fear and danger. I’m just saying he’s dangerous. He is a very unique type of fighter, and I look forward to challenging myself.”

The walk to the Octagon carries the months of work and waiting for Worthy, but in a way, it’s the polar opposite of his short-notice opportunity with which he made his mark in his debut. Now, “The Death Star” – who is an unabashed a Star Wars fan (and did not love the latest installment), gets another shot to devastate an up-and-coming opponent.

“I’m making sure I can keep a hard pace for 15 minutes straight, that pace that makes you want to throw up in your mouth the whole f****** fight,” Worthy said. “Everything else is a coin toss. I have my skill set; he has his skill set. Those are the only things that I can anticipate and control.”

That’s the goal on which his mind is set and, if anything, Worthy has proven his ability to make good on the promises he makes to himself.