Bantamweight Sees A Clear Path Through The Division
By Gavin Porter, on Twitter: @PorterUFCnews • Nov. 6, 2020

It’s been more than a year since bantamweight Khalid Taha stepped into the Octagon. Since then, he’s focused on his life outside the cage, hitting the trifecta in 2020: becoming a husband, finding out that he is going to become a father and buying a house.

Taha (13-2, 1 NC) quickly admits that 2020 has gone better for him than he could have imagined, before adding that all he needs to do now is cap the year off with a big win at UFC Vegas 13.

He will look to do that against Raoni Barcelos, and he believes that depending on how he takes care of business on Saturday, he could finally break into the rankings. 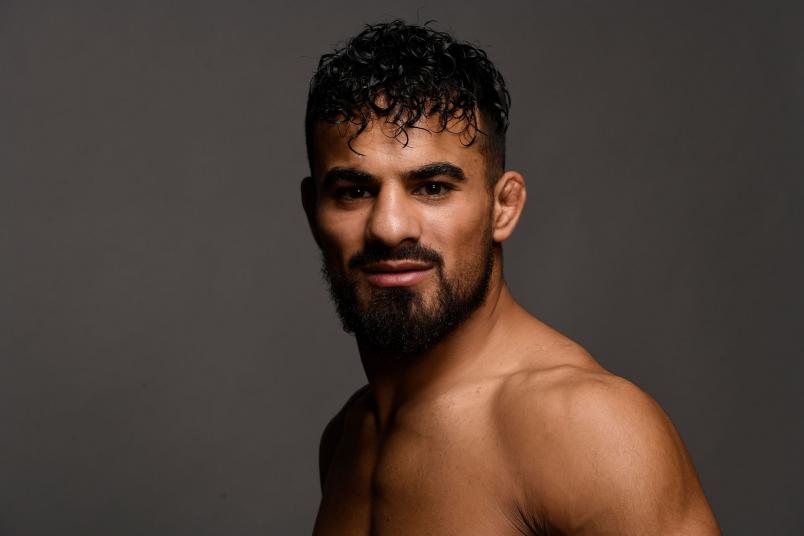 Khalid Taha of Germany poses for a post fight portrait backstage during the UFC 236 event at State Farm Arena on April 13, 2019 in Atlanta, Georgia. (Photo by Mike Roach/Zuffa LLC)

“I think a dominant win will put me at least in the top 15. It’s very nice that the champ Petr Yan has fought almost everyone after him. Aljamain Sterling, he’s going to fight him, he’s fought Jose Aldo already. The title shot isn’t that far away,” Taha told UFC.com. “I think after this fight, two more dominant wins, two more good wins against good guys from the top 10 could put me in the position to fight for the belt.”

You might think that’s big talk from the 28-year-old, but the truth is, he is more than confident that he can defeat the beasts that make up the UFC’s bantamweight division. Taha believes what sets him apart is his mindset and his ability to find confidence in every facet of a fight.

And he’s excited to prove that on November 7.

“To be honest, my confidence is one of my best weapons I have because in every fight I’m very, very confident. I’ve never went into a fight thinking, ‘maybe he’s stronger or he’s too good at this or too good at that,’” Taha said firmly. “Whatever, however, if he’s a black belt or a wrestler or a striker I’m going to be better in some different way and at the end of the fight I’m going to get the victory.”

One of the aspects that intrigues Taha the most about his matchup with Barcelos is the Brazilian’s undefeated run in the UFC. He will enter the bout with Taha on an eight-fight winning streak overall, and that’s definitely something that Taha can’t wait to put an end to and use to propel himself up the ladder.

“It’s exciting because he’s undefeated in the UFC and has an eight-fight winning streak, he’s very high-ranked, he’s like a top 15 guy. He was supposed to fight in March against a top 12 (opponent) or something like that but because of COVID it didn’t happen,” Taha said. “I think it’s going to be a huge win for me. It’s going to be a big step and a good statement. I’m going to show the bantamweight division and the bantamweight top ten’s that I’m here.”

Taha has been eagerly waiting for the jump in competition and sees this bout with Barcelos as his coming out party. Being on the sidelines for over a year has fueled Taha to hit the training in the lead-up for this fight harder than ever, and there is no doubt he just can’t wait to get in there and compete.

“It’s just energy. I feel it from everywhere. From all the fans, my family members, my friends, my brothers. I feel like everyone has been waiting so long for my comeback and I have been, as well,” Taha said. “I just want to start fighting. I have 15 minutes and I want to have fun for 15 minutes.”

Make sure you tune into ESPN+ to watch Taha battle Barcelos on the UFC Fight Night: Santos vs Teixeira main card.