After being the victim of a second round knockdown, lightweight up and comer Rustam Khabilov kicked his game into another gear on Sunday, leading him to a three-round unanimous decision win over Chris Wade in a UFC Fight Night bout at the Rotterdam Ahoy in the Netherlands.

After a back and forth first round that saw Wade have success early and Khabilov matching him late, New York’s Wade dropped Khabilov with a left kick to the head in the opening minute of round two. Khabilov recovered quickly and began to work for submissions from his back, but Wade defended well and eventually got back to his feet. There, it was Khabilov attacking with his strikes before hitting a takedown, capping off an interesting round.

Khabilov made a statement with a takedown to kick off Round 3, and he quickly took Wade’s back. Wade escaped that dilemma, but he was unable to get back to his feet, wrapping up a big round for the “Tiger.” 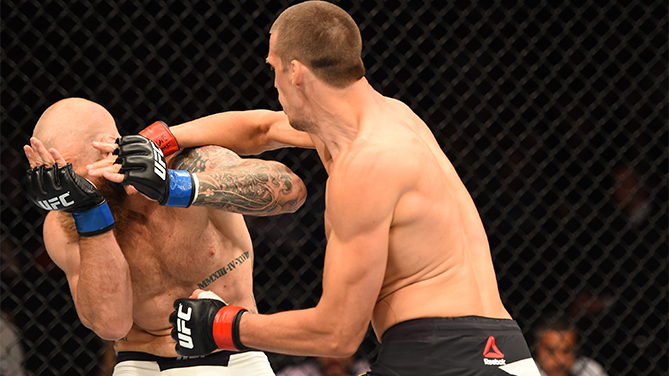 In his first bout since October of 2014, Stockholm middleweight Magnus Cedenblad made it four consecutive wins, scoring a second-round TKO of Garreth McLellan.

Cedenblad effectively kept McLellan at bay with his long reach in the first round, scoring a knockdown with a right hand midway through the stanza. In the second, Cedenblad rocked the South African with a right kick to the head, and McLellan was unable to recover, with a series of unanswered blows prompting referee Lukasz Bosacki to halt the bout at :47 of round two. 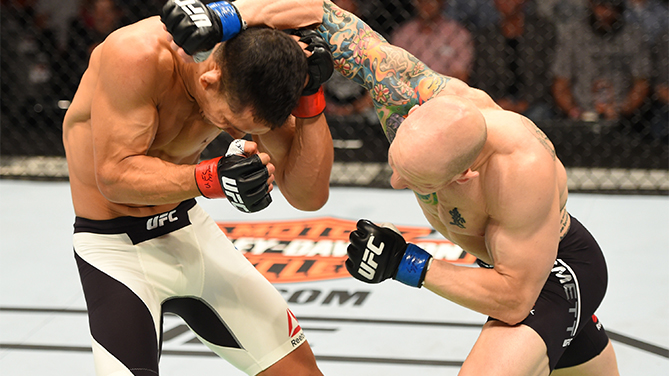 A late notice call to replace the injured Nick Hein was the opportunity Josh Emmett was waiting for, and despite breaking his finger in the final round, he made the most of it, winning a three-round split decision over Jon Tuck in lightweight action.

Emmett was impressive in his first round as a UFC fighter, as he came out throwing bombs and didn’t let up for the first five minutes, catching Tuck off guard at times.

There was no change to the landscape of the fight in the second, Emmett loosening up even more with his striking as he extended his lead on Tuck, who just couldn’t seem to get in a rhythm. About the only thing that kept Emmett from a perfect night was an injury to his left hand in the closing stages of round three that had him on the defensive as Tuck rallied. 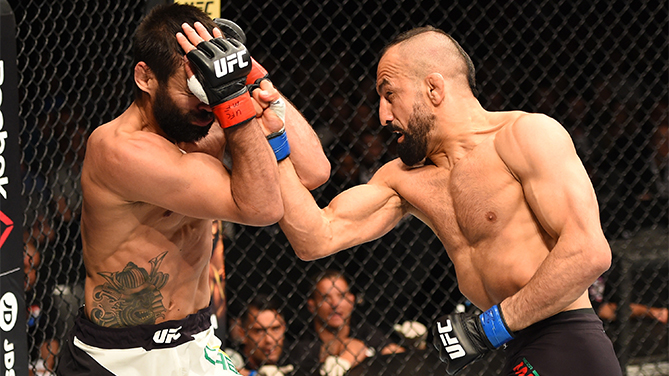 Sweden’s Reza Madadi broke open a close lightweight bout with Yan Cabral in a big way, stopping the Brazilian via strikes in the third and final round.

The first round was fairly uneventful until the final minute, when Cabral (12-3) broke the stalemate with a takedown and then took Madadi’s back. The Iran native defended well though, making it to his feet by the end of the frame.

It was more of the same in round two, with Cabral and Madadi engaging in a grueling grappling battle. But as Cabral might have stolen the first round with a late takedown, Madadi did the same thing in the second, keeping the bout close.

Madadi (14-4) scored with a big right hand to open the final frame, and while Cabral survived that initial shot, moments later, an uppercut stunned the Brazilian against the fence, and after a couple unanswered blows, referee Leon Roberts intervened, stopping the bout at the 1:56 mark.