Khabib: "There Can Only Be One King"

“I respect him like a fighter, like a human being,” said Nurmagomdeov of Poirier. “But when I go to the cage, I can’t respect him. There can only be one king of the jungle.”
By Thomas Gerbasi, on Twitter: @TGerbasi • Sep. 6, 2019

The drama is over. At least for now. And that’s a good thing for Khabib Nurmagomedov, not that you can tell it by looking at his ever-present poker face when talking about the man he defeated in one of the biggest fights in MMA history, Conor McGregor.

“I feel great after this fight because I finished him, I made him tired, I made him tap,” said the lightweight champion, who submitted McGregor in the fourth round last October, apparently putting a decisive stamp on a rivalry that got ugly before and after the UFC 229 bout. That doesn’t mean Nurmagomedov wants to forgive and forget with the Irishman.

“Right now I’m good, but this one is never finished,” he said. “Even if we see (each other) somewhere, we’re gonna fight, one hundred percent.”

Well, maybe there is still a little drama, but today, the rivalry with McGregor is the furthest thing from the mind of “The Eagle,” who has pressing business with interim champion Dustin Poirier in the main event of UFC 242 in Abu Dhabi. It’s another one of those fights that gets the butterflies scrambling in the stomach of fight fans, and as the buzz gets deafening on the lead-up to fight day, it’s a reminder of how life has changed for Nurmagomedov in the last two years.

Already one of the top lightweights in the game and one sporting a perfect record that is as impressive as his attack on fight night, Nurmagomedov’s profile took off in the lead-up to UFC 223, when he won the title by beating Al Iaquinta, and it hit the stratosphere with the McGregor fight. Now, everyone knows who the Dagestan native is, and they’re tuning in to watch him fight and paying attention to his every move. That takes some getting used to for someone who isn’t in the habit of chasing the spotlight. But while his life is a lot different than it used to be, one thing remains the same.

“A lot of things changed,” he admits. “Big attention, a little bit of pressure because a lot of people know me. But I saw a lot of champions, when they become champion they changed because they don’t train like how they did before. You have to stay focused, stay hungry, stay training hard. You can’t change because then a lot of young guys, hungry guys are gonna come and change you. If you want to be in this sport, you have to focus one hundred percent. If you lose something, somebody is gonna beat you.”

That’s something Nurmagomedov won’t let happen if he has anything to do with it. If Poirier is the one to put a loss on that 27-0 record, it will be because he was the better man in Abu Dhabi on September 7. It won’t be because Nurmagomedov was enjoying life as a celebrity. He’s a fighter, first and foremost, and he believes this isn’t a mindset you can learn.

“I think this is what you have inside, you can’t change it,” he said. “But a lot of people don’t have this.”

Nurmagomedov has it. So does Poirier. That’s why this is one of the biggest fights of 2019. And the 30-year-old expects nothing less from his second title defense in the UAE.

“It’s gonna be a good, tough fight for me too because he has good experience, more than 20 fights in the UFC, but he has to be ready for my pressure,” said Nurmagomedov. “Maybe he thinks it’s gonna be like a kickboxing match or Muay Thai match. No. I’m gonna try and fight him everywhere inside the cage and he has to be ready.”

Poirier is as ready as he’s going to be for this fight, and that’s what Nurmagomedov wants. But beyond that, the Russian powerhouse isn’t interested in what “The Diamond” has planned for him.

“I never think about what my opponents think,” he said. “I don’t care about this. I always focus on myself. I have to be ready for a five-round war, five rounds of a very tough fight. What he thinks about, I don’t care. When I go to the cage, I’m gonna do my thing. My goal is always the same: catch my opponents, maul them, make them tired, talk with them and make them tap.” 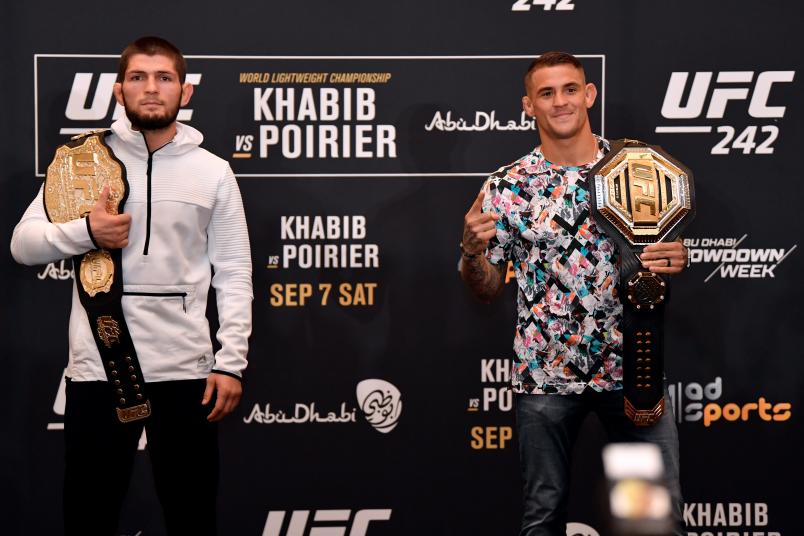 That may be worse than being the victim of a quick knockout or submission. Add in his matter of fact demeanor, and Nurmagomedov is quite the intimidating figure, even if there is nothing but respect between the two – at least for now.

“I respect him like a fighter, like a human being,” said Nurmagomdeov of Poirier. “But when I go to the cage, I can’t respect him.”

And when it’s over?

“There can only be one king of the jungle.”