Knocking on the door for a shot at the UFC lightweight title, No. 2-ranked contender Khabib Nurmagomedov could earn a crack at the crown on Dec. 30 when he faces fellow contender Edson Barboza. It’s an intriguing style matchup between two of the top 155-pounders in the world, but before UFC 219 rolls around, we’re going into the archives for fight reports and UFC FIGHT PASS videos that show just how dominant the unbeaten “Eagle” is on fight night. 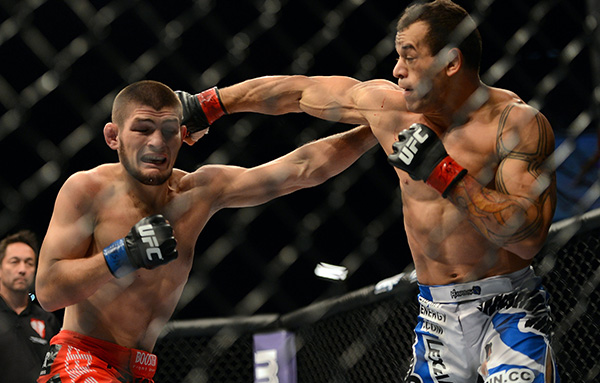 (7/7/12) It was an emotional win for Khabib Nurmagomedov, and rightfully so, as the 155-pound prospect scored the biggest victory of his career with a shutout three round decision over Gleison Tibau that upped his unbeaten record to 18-0 and brought him to tears in the middle of the Octagon.

The stars of the first round were the Brazilian fans chanting for their fighter and their country, throwing in a song as well during the first five minutes. In the cage, it was a stalemate, as Nurmagomedov tried but couldn't succeed in taking his foe down, while Tibau’s offense consisted of a couple flush counterpunches as the Russian came in and threw wide.

Round two was a close one as well, but Nurmagomedov appeared to be getting a little closer to Tibau (34-8) with his punches, marking up the Brazilian’s face despite still getting tagged with counters that kept the veteran Tibau in the fight.

After yet another nip and tuck session between the two lightweights to start round three, Tibau got a takedown just before the midway point, but he was unable to do anything with it as “The Eagle” shot right back to his feet. And in the end it was Nurmagomedov’s aggression and pushing of the fight’s pace that may have swayed the judges to award him the fight via unanimous scores of 30-27.

(1/19/13) Lightweight prospect Khabib Nurmagomedov made a major statement in the main card opener, emphatically stopping veteran Thiago Tavares in the first round to improve to 19-0 as a pro.

After a tense feeling out process as Tavares talked and Nurmagomedov used lateral movement while looking for an opening, the Dagestan native found the sweet spot, sending Tavares to the mat with a short left uppercut. An unanswered series of elbows followed, with referee Dan Miragliotta halting the bout 1:55 into the fight. 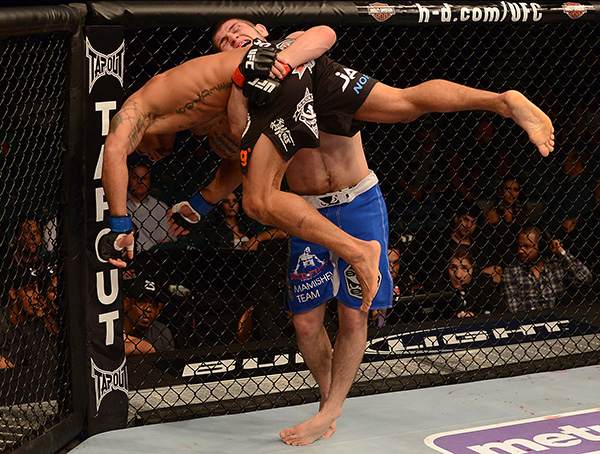 (5/25/13) Russian-born, AKA-homed ground monster Khabib Nurmagomedov made it 20 in a row with a three-round ragdolling of Abel Trujillo. The 24-year-old won the lightweight bout with scores of 30-27 (x3) and broke the UFC record for most takedowns in a fight with 21.

The two kept far more distance than yesterday at the weigh-in when they had to be separated, and the first throw came from Trujillo, who connected with a left. Trujillo came forward twice more with strikes before earning a takedown. Nurmagomedov thanked him by locking in an armbar attempt, and once Trujillo rolled out and stood up, Nurmagomedov took his back and threw him to the ground eight times in a row, never losing his grip around Trujillo’s back as the Blackzilian stood. Trujillo rolled out on the last takedown and was quickly triangled, where he stayed until the bell.

After another round-opening standoff, Trujillo swung for the fences, but Nurmagomedov landed then took down Trujillo. Both men scored with haymakers in the ensuing exchange on the feet, and then the Russian Sambo champion got another takedown on the All-American collegiate wrestler, followed by another cartwheeling trip that put him on Trujillo’s back with both hooks in. Though Trujillo briefly landed in top position and teed off after one takedown, both men continually got back up to their feet.

Trujillo chased Nurmagomedov with a left, but was clipped by a counter and wound up securely in the Russian-born fighters’ bodylock, as the rinse-and-repeat takedowns tallied up toward 20. Nurmagomedov landed some knees on the ground and mixed it up with one high-altitude takedown and a suplex but was relentless in getting things to the mat.

Nurmagomedov’s record remains perfect at 20-0, while Trujillo drops to 10-5. "I’m very sorry I didn’t make weight for the fight," said "The Eagle," who sacrified 20% of his purse after coming in 2.5 pounds over the lightweight limit. "I also wanted to showcase my wrestling techniques in support of the ‘Save Olympic Wrestling’ campaign. Wrestling means a lot to me and we have to do what we can to keep it alive.” (Report by Laura Gilbert)

(4/19/14) Khabib Nurmagomedov’s 22nd win without a loss was another dominant effort, as he shut out Rafael Dos Anjos over three rounds, snapping the Brazilian’s five-fight winning streak in the process.

Nurmagomedov’s takedown dominance continued, as he put Dos Anjos on the canvas in the second minute, albeit briefly. And though the Brazilian tried to work a stick and move strategy, the Dagestan native’s plan was to rush with punches and get the takedown, a method that was working for him because even when he couldn’t get the takedown, he landed enough shots on the way in and controlled the action to such an extent at close range that the points were piling up.

An early second round takedown by Nurmagomedov almost ended in disaster thanks to a Dos Anjos guillotine choke attempt, but “The Eagle” pulled free and once again resumed control at close quarters, putting another round in the bank.

Dos Anjos showed plenty of urgency as he came out for the third round, knowing he needed to turn things around, and fast. But after some positive early moments, a thudding takedown by Nurmagomedov put the ball back in the Russian’s court, and he kept it there until the final bell. 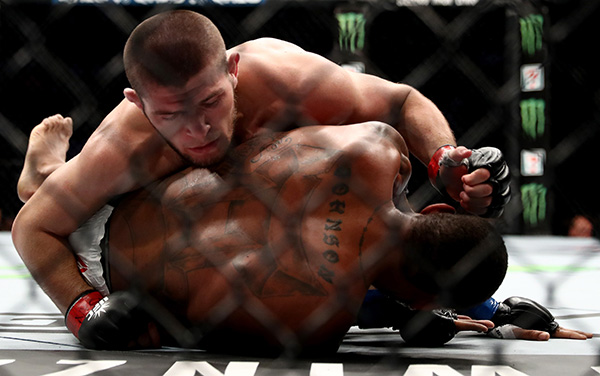 (11/12/16) Unbeaten Khabib Nurmagomedov had hoped to fight for the lightweight title on tonight’s UFC 205 card, and while he didn’t get that chance, he most certainly made a strong case for a championship fight with a dominant third-round submission of Michael Johnson that lifted his perfect pro record to 24-0.

Johnson set a fast pace to start the fight, tagging the No. 2-ranked Nurmagomedov with several hard lefts to the head. Nurmagomedov stayed in the pocket with his foe, paying a price to get within grappling range. But once he did, he was able to return the favor and get Johnson in trouble with a steady stream of ground strikes. In the final minute of the round, Nurmagomedov unleashed a furious barrage of punches, even pushing his foe into the fence as he tried to rise, capping off a big round.

As round two opened, Johnson’s strikes became more defensive in nature, as he tried to keep the Dagestan native off him, but Nurmagomedov kept pressing, failing on his first couple takedown attempts but eventually getting Johnson to the mat in the second minute. Back on the canvas, Nurmagomedov went on the attack again, drilling Johnson with shot after shot before the horn intervened.

Courageously answering the bell for round three, Johnson exchanged blows with Nurmagomedov before getting taken down, and referee John McCarthy was watching carefully as “The Eagle” landed more shots. Nurmagomedov even appeared to be concerned for his opponent, saying, “You gotta give up.” Eventually, he had to though, as Nurmagomedov sunk in a kimura that finished the bout at 2:31 of the final frame.