Las Vegas – UFC® today announced that former UFC heavyweight champion Kevin Randleman has been named to the UFC Hall of Fame class for 2020 as a Pioneer. The 2020 UFC Hall of Fame Induction Ceremony, presented by Toyo Tires®, will take place later this year and will be streamed live on UFC FIGHT PASS®.

“Kevin Randleman was one of the first real athletes in the early days of UFC,” UFC President Dana White said. “He was a two-time NCAA Division I National Champion and All-American wrestler at The Ohio State University. He was the fifth heavyweight champion in UFC history and one of the first athletes to successfully compete at both heavyweight and light heavyweight. He was a pioneer of the sport and it’s an honor to induct him into the UFC Hall of Fame Class of 2020.”

Randleman will enter the UFC Hall of Fame as the 17th member of the Pioneer Era wing. The Pioneers Era category includes athletes who turned professional before November 17, 2000 (when the unified rules of mixed martial arts were adopted), are a minimum age of 35, or have been retired for one year or more.

Randleman made his UFC debut on March 5, 1999 at UFC® 19: ULTIMATE YOUNG GUNS in Bay St. Louis, Missouri, defeating Maurice Smith via unanimous decision. His victory earned him an immediate title shot for the vacant UFC heavyweight title against future UFC Hall of Famer and three-time King of Pancrase champion Bas Rutten in the main event of UFC® 20: BATTLE FOR THE GOLD. Kevin entered the bout with a 7-2 record against the veteran Rutten, who stepped inside the Octagon® with a 26-4-1 record, having won 19 of his previous 20 fights (1 Draw).

UFC® 20: BATTLE FOR THE GOLD took place on May 7, 1999 in Birmingham, Alabama. As the fight began, Randleman immediately secured his first takedown. Kevin maintained top control while landing a barrage of punches that broke Rutten’s nose within the first five minutes, momentarily stopping the action for doctors to evaluate his condition. After Bas was deemed able to continue, Randleman immediately took Rutten back to the canvas, trading punches for 10 minutes, until referee John McCarthy halted action so doctors could address the heavy bleeding from Rutten’s nose.

Rutten would spend the majority this event fighting and throwing punches from his back, which resulted in Bas landing numerous strikes to Randleman’s head. At the end of regulation, with no winner declared, both athletes advanced to fight for three additional three-minute overtime rounds. Randleman seemed to control two of three rounds, but following 21 minutes of action, Rutten was declared the winner via split decision. This split decision loss is still considered one of the most controversial decisions in UFC history.

Rutten would later vacate the title, giving Randleman a chance to compete for the vacant UFC heavyweight title against Pete Williams at UFC 23.

Randleman had a personal interest in this matchup, as Williams had recently defeated Kevin’s friend, trainer and coach, future UFC Hall of Famer Mark Coleman, one year earlier at UFC® 17: REDEMPTION. Known as “The Kick Heard Round the World”this fight was later inducted into the UFC Hall of Fame’s Fight Wing in 2016.

UFC®23: ULTIMATE JAPAN 2 took place on November 19, 1999 in Tokyo, Japan. At the beginning of the match, Randleman quickly advanced to the center of the Octagon, hitting Williams with several punches before securing his first takedown at the 10-second mark. Randleman controlled the action during the majority of the first round, until Williams rocked Kevin with a series of punches in the late frame.

Randleman recovered for the start of the second round, taking Williams down repeatedly and controlling the pace of the action through the remaining four rounds. Kevin’s numerous takedowns proved to be the deciding factor to winning the fight via unanimous decision and becoming the fifth heavyweight champion in UFC history.

Next, Randleman would successfully defend his title by defeating Pedro Rizzo at UFC®26: ULTIMATE FIELD OF DREAMS, which took place on June 9, 2000 in Cedar Rapids, Iowa. With his victory, he became just the second UFC heavyweight champion to make a successful title defense. Kevin took a four-month break before returning to action to face future UFC Hall of Famer Randy Couture on November 17, 2000 as the main event of UFC®28: HIGH STAKES. Randleman would lose the title to Couture, then split his last two fights before leaving the organization after defeating former Strikeforce® light heavyweight champion Renato Sobral at UFC®35: THROWDOWN. He would continue to compete at both light heavyweight and heavyweight in other promotions until retiring in 2011.

During his MMA career, Randleman was known for his power and speed, as he recorded nine knockout victories and nine first round stoppages. A world-class wrestler at all levels, he also secured the second-most takedowns (21) during the time frame in which he competed in UFC from 1999-2002 (Tito Ortiz, 29). 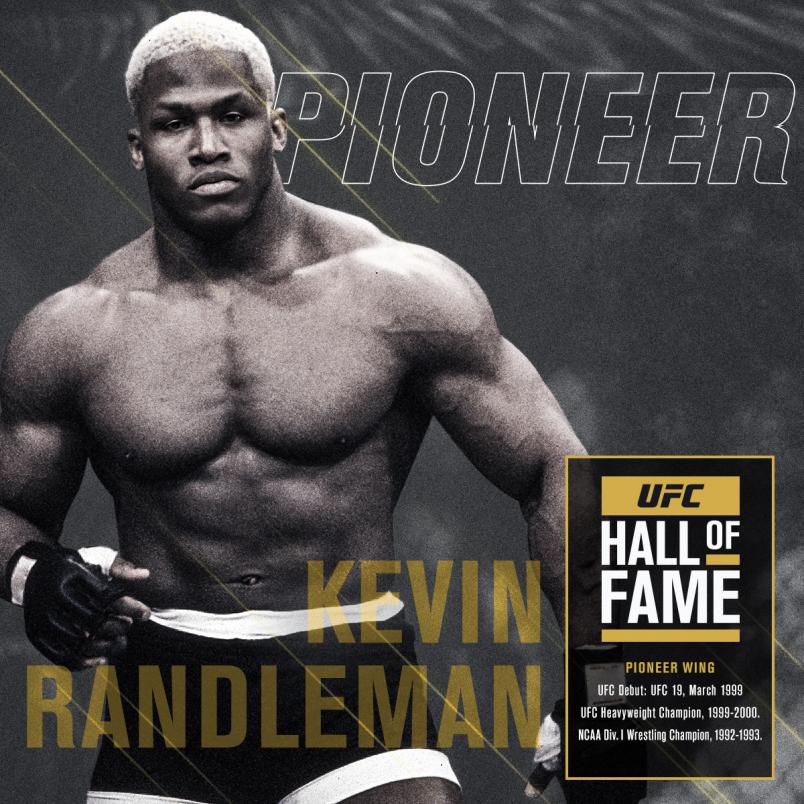 Throughout his MMA career, Randleman consistently competed against the best of the best, including 13 athletes that collectively captured 13 UFC, six King of Pancrase and three PRIDE FC championships, along with individual titles in Strikeforce® and World Extreme Cagefighting®, respectively. Randleman also used his combat sports notoriety to compete as a professional wrestler with domestic and international promotions from 2002-07.

A native of Sandusky, Ohio, Randleman began wrestling in high school, compiling a record of 122-11 and capturing the Ohio state HS championship in 1989. He went on to wrestle at Ohio State University, where he was a three-time Big Ten and two-time NCAA Division I Champion in 1992-93. He passed away at the age of 44 in 2016 due to complications from pneumonia and is survived by his wife and four children.

Additional inductees into the UFC Hall of Fame class of 2020 will be announced in the coming weeks.