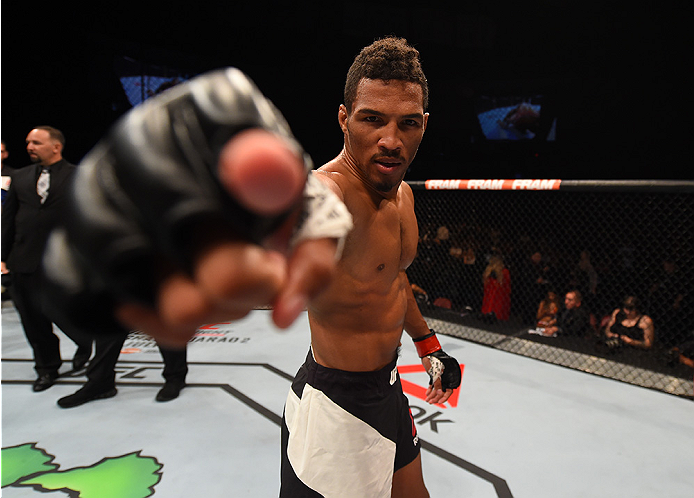 What is it with these UFC fighters and their “visions”?

Ronda Rousey has them. Conor McGregor too. Now, after compiling a four-fight win streak, Kevin Lee can see his own roadmap to UFC lightweight gold clear as day and he’s more than happy to tell everyone about it.

“Here’s the timeline I see,” Lee said. “I think ‘Cowboy’ [Donald Cerrone] beats the hell out of [current UFC lightweight champion] Rafael dos Anjos the week after my fight. I’m going to push and I want to fight Al Iaquinta if the UFC goes to Madison Square Garden. I think we should do the rematch whenever they’re going to have it for the New York debut. I want to fight Al again and erase that ‘1’ on my record. Then I think I’m one fight away from that title shot and I think I’ll box circles around Cerrone to take the title. When I got into this sport, I had this goal of beating Jon Jones’ record. He was 23 and 8 months? I’m getting close to that, so I’m being realistic, but when I’m 24 - I’ll be the champ. I think I’ll beat Cerrone for the title and I don’t see anyone else getting in the way.”

Whether it’s “The Secret” or “self-actualization” or just sheer confidence in one’s abilities, the 23-year-old from Detroit, Michigan has made premonitions become actions that have led to success. Nothing against earning an undergraduate degree, but Lee left his collegiate wrestling career at Grand Valley State University to become a pro MMA fighter, and about two years later Lee was making his UFC debut. His first Octagon outing did not go as planned, so “The Motown Phenom” moved to Las Vegas for better training and is 4-0 in the UFC ever since.

“I came to Vegas maybe two weeks after my UFC debut against Al Iaquinta - I just needed a change of pace,” Lee said. “I barely trained for the Iaquinta fight. I didn’t really have the training partners to push me. I just got into the car and started driving and I ended up in Las Vegas. The level of training partners and coaches out here just doesn’t compare to what I had at home. That fight with Iaquinta really taught me to take everyone serious. Take every camp serious. Now, I put on six to eight week training camps and they’re all very hard and I train with some of the best guys in the world. Moving to Vegas has changed my mindset so much because I’m working with these guys who are world champions or have been world champions in other sports or other aspects (of MMA). If I had stayed back at home, there’s no way I would be at this level I’m at right now.”

After three straight wins via decision, Lee delivered a statement with a first-round rear naked choke of James Moontasri at UFC Fight Night: Mir vs. Duffee. If a submission finish less than three minutes into the bout wasn’t enough, Lee went kick for kick with the 2007 Pan American Games silver medalist in taekwondo while scoring with some heavy leather that wobbled Moontasri. Meeting an opponent head-on in their strength isn’t new to Lee either, as he shot for takedowns and attacked second degree BJJ black belt Michel Prazeres on the ground en route to a unanimous decision win in February.

“If he was going to kick, I was going to kick too,” Lee said. “As hard as he kicked me, I tried to kick him even harder. I just wanted to show him I’m comfortable competing with anyone anywhere. I feel comfortable competing with anyone in the world in any aspect of fighting. If me and James were in a straight taekwondo match? Yeah, maybe. But this is a fight and I think I can do anything as good as anyone else in the world in a fight. If that was Anthony Pettis out there and he wanted to trade body kicks then I would trade body kicks right along with him. I’m not going to shy away from anyone’s A game for sure. Grappling has always been my strong suit. I wanted the knockout, but I’ll take it how it comes.”

With an 11-1 pro record, including five sub stoppages, The Motown Phenom is fearless in his fights, but his true secret weapon is his work ethic. Lee is putting in hours on top of hours going from gym to gym to tangle with the best and brightest “Sin City” has to offer. From MMA sparring at Xtreme Couture to rolling with grappling icons at Robert Drysdale’s to boxing at the respective gyms of Floyd Mayweather and Roy Jones Jr. And it all shows inside the Octagon, as Lee delivers a non-stop attack on the feet, shoots for takedowns and jumps on submissions.

“I put 100% of my effort into every fight,” Lee said. “I just try to push. I just try to work the whole time. I want to make sure that this guy knows we’re out there to fight. We’re not out there to dance around or stare at each other. The whole time I’ll be pushing for something and that’s been my mindset since the get go. When I first started wrestling, I started late in life at 16 years old. To beat these guys who had been doing it their whole life, I had to get that little edge by pushing where they weren’t comfortable. I just always try to stay offensive. And I think that’s what people like to see. People love to see knockouts and whatever, but I think people like to see you work. People like to see you advancing and moving and going for stuff.”

Up next, The Motown Phenom is set for a clash in his adopted hometown of Las Vegas this Saturday at UFC 194 against Leonardo Santos. The Ultimate Fighter Brazil 2 welterweight winner showed off his vaunted BJJ black belt skills in his most recent Octagon outing with a second-round rear naked choke of Tony Martin in March. As mentioned, don’t be surprised to see Lee challenge the famed grappler - who once armbarred former longtime UFC welterweight champion Georges St-Pierre in under a minute at the 2005 ADCC tournament - on the ground.

If Lee wants to make sure his vision of future gold is true, he knows he’ll need to deliver a special performance inside the Octagon against Santos.

“I feel like I’m the dark horse of the division and it’s just up to me to put on performances to make people notice,” he said. “Anyone who knows me or has been following my career knows that I’ve been calling out everybody and their mom to fight. I was a little upset it wasn’t a bigger name, but Leo’s dangerous. I’ve put in a lot of work in the camp. I’m ready to fight. I’ve been ready to fight for a week. I’m taking him very serious, but this is going to be a statement. He’s got a lot of things going against him in this fight. Him coming over here to Vegas for this fight with Vegas’ dry heat and elevation. There’s nothing but monsters with horns and scales out here. He’s a bit older and I think he’s on his downside, but I’m not taking him lightly. I’m going to go out there and make a statement.”