"Where I grew up, more than likely you were going to jail at one point,
and I didn’t want to fit into that stereotype. So MMA was a way for me
to break out of that." - Kevin Lee 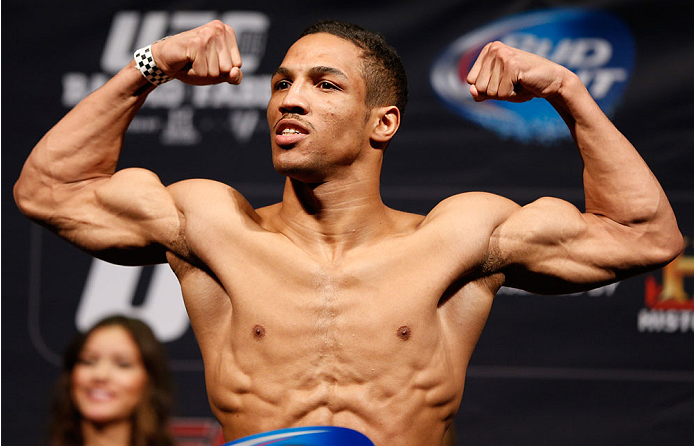 Kevin Lee kept his promise. Growing up in one of the roughest areas in Detroit, it would be almost too easy to say there was no joy on Joy Road. But Lee wasn’t about to get swept up by the streets that had taken so many lives on that block.

He was determined to not follow the wrong path though, something that sounds easy to someone, but that in reality couldn’t be much more difficult, especially when you are surrounded by negative influences and in so many cases, desperation.

“Most of the guys I grew up with, they’re still in Detroit and still living on the same blocks and the same streets, just because it is so easy,” said Lee. “If your parents don’t make much, you’re coming home and don’t have much to eat and the lights aren’t on, but you see the drug dealer down the street and he’s got flashy cars, it’s real easy to say ‘well, he’s doing it, so he must be doing it the right way.’ You didn’t see a doctor down the street and see how he became successful, so it’s tough to break away. And it gets lonely sometimes because you’ve got to do it on your own. You have to be a self-motivator, and you can’t necessarily depend on watching somebody else do it by example.”

College was a way out for Lee, and with college came wrestling. But in 2011, mixed martial arts entered the picture, and the young man who was dubbed “The Motown Phenom” had a new path out of the Motor City.

Nearly three years after his first amateur fight, Lee is in the UFC, and while he didn’t win his first bout against Al Iaquinta at UFC 169 in February, he did get a few bucks in his pocket for his efforts, and with it, he kept a promise he made to a couple of very important people.

“I said before my first fight that the first time I made a little bit of money I was going to use it on them,” Lee said of his parents. “And I got to do it, and it ended up working out. Not as good as I wanted to, but what little I could do, I tried.”

He’s being modest. Because you can’t put a price tag on what the 21-year-old did when he moved out to Las Vegas after the Iaquinta fight and brought his parents with him.

“It was just a time for change for me and my family as well,” he said. “My family lived in the heart of Detroit, and it was a matter of when something was gonna happen, not if. So Vegas was just better all around, not just for fighting, but in terms of life, and not just for me, but for everybody.”

You can read those words and know that Lee is a lot more mature than most of his peers, but hearing him say them gets that point across even more. He’s seen a lot in a short time, but he’s risen above his environment to chase a dream, and what’s more inspiring than that?

“It was tough,” he said of his years in Detroit, “but what it does is make you tough. And I learned at an early age what being on the streets does to you. I didn’t get the chance to see somebody put in the work and become successful, so it kind of fueled that drive for me to want to do that, and for me to do that for my little brothers and for somebody else to see someone work hard and be successful. Because where I grew up, more than likely you were going to jail at one point, and I didn’t want to fit into that stereotype. So MMA was a way for me to break out of that.”

And he’s just getting started. 7-0 on the local circuit when he got the call to the UFC, he lost a close decision to Iaquinta in New Jersey, but in the process impressed anyone who saw the fight, with the exception of the fighter himself.

“I let myself down during the fight,” he said. “I don’t think I went in with the right mindset and I just didn’t execute my game plan. The fight itself I was disappointed in; a lot of people liked it, and it was fun to put on a fight for the fans, but overall I not only wanted to get the win but actually display my skills. I felt like I just didn’t get the chance to display what I was made of. Knowing myself, I could have done a whole lot better.”

He gets a second shot this weekend against Canada’s Ronson, and with a full camp in Vegas training with the likes of Dewey Cooper, Robert Drysdale, and Robert Follis, along with input from his longtime coach Sean Dizay, he’s excited for the chance to really show what he can do in the Octagon, not just on Sunday, but in the years to come.

“It’s exciting for me,” he said. “It pushes me more because I want to show what I’m made of. Even if I go out there and look spectacular in my next fight, I’m still not going to be able to show everything that I’m made of. It’s going to take at least a couple of years before UFC fans will really see what I do, and that’s exciting because it allows me to grow and it fuels me and fuels the hunger. I know I’ve got a long time in the sport, so I just try and get better and better each day.”

And if all else fails, he’s still got Detroit toughness to call on, and that’s a trait that will never fade.