Kevin Lee: The Future Only gets Brighter 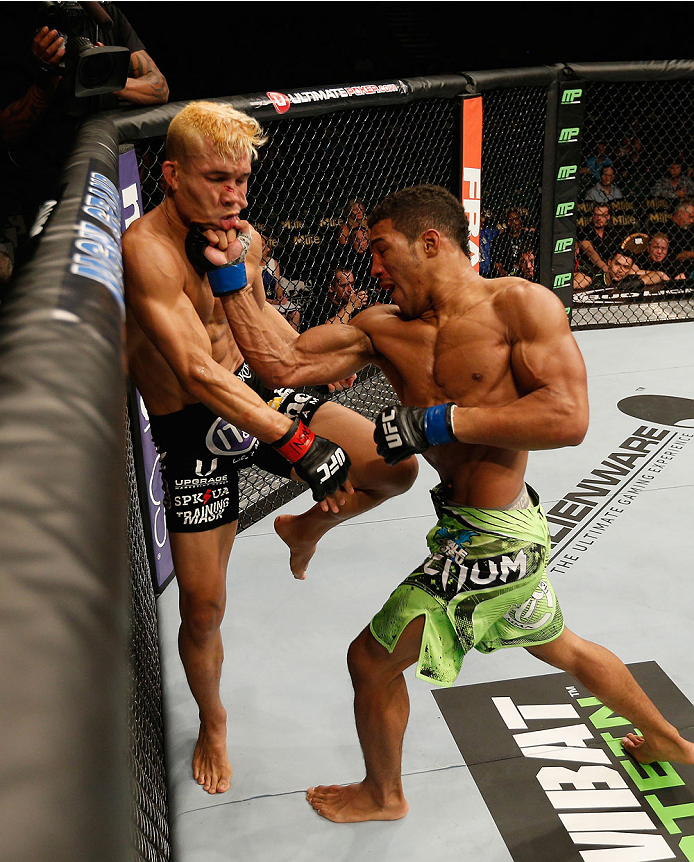 There isn’t much in the way of good memories Kevin Lee is willing to share from his childhood. It’s not because the surging lightweight talent is guarded or untrusting with others, but simply because there isn’t one he can remember. Even in a situation where the Detroit native takes a few moments to really dig for something remarkable, a shrug is the only thing produced at the end of the process.

“There just isn’t one good thing I can remember to be honest with you,” Lee said.

Perhaps the starkest element of Lee’s struggles is the fact he’s 22 years old and his formative years are just barely out of his review mirror. Yet, backwards isn’t the direction the up-and-coming prospect is looking these days as everything he’s about is tied to the bright future he has ahead of him.

Lee is currently blitzing his way up the crowded ranks of one of the UFC’s deepest divisions, and making noise every step of the way. The Xtreme Couture representative’s time inside the Octagon has garnered plenty of attention from the MMA community, and he appears poised to lead the next wave of talent hungry to breakthrough and establish themselves as major threats in the shark tank of the 155-pound fold.

And while Lee prefers to leave the past back East where he left it when he moved out to train in Las Vegas full-time, he also knows his hard-scrabble days coming up in “The Motor City” laid the foundation for the man he is today.

“The story in Detroit is all the same everywhere you go throughout the city,” Lee said. “Things are moving toward improvement there, but when I was growing up it was horrible all throughout. I don’t ever say too many bad things about the city because if I didn’t grow up there and go through the things I did, I wouldn’t be who I am today. I wouldn’t have the work ethic I have behind me. I think if I did something else like play football or become a doctor, I would still have the mentality and strong Midwest work ethic I have.

“It was never good or right growing up like we did, but we did what we had to do in order to survive. But I’m beyond survival now and I’m thriving. And to be honest with you, it comes down to money. When you grow up and struggle the way we did, you’re looking for the money coming up. That’s going to be first and foremost. Some guys chased that money by playing football, but fighting was much more natural to me.”

While Lee is one of the most recent names to emerge from the struggles of a harsh environment, he is hardly alone in that category. The history of combat sports is rich with stories of perseverance and overcoming social and economical adversity to achieve success under the bright lights, with a handful of American cities serving as the backdrop for each of their respective stories.

In studying MMA the way he has, Lee is yet to see a wave of young black and Latino fighters jump to MMA in order to find their way out of poverty, but he absolutely believes it’s going to happen.

“You see these boxers making millions of dollars each fight and they were once kids who had tough upbringings in Philly or Atlanta,” Lee said. “They are from Chicago or Detroit, and I think it’s going to come up soon that we’ll see MMA get an influx of athletes from those environments. Especially as the money you can make in this sport continues to go up.

Lee will be looking to take the next step of his own journey when he faces James Moontasri at Fight Night Mir vs. Duffee in San Diego on July 15. His current three-fight winning streak will ensure Lee enters the Octagon with some solid momentum at his back, and he believes an impressive victory over the California striker will accelerate his climb up the divisional ladder.

The lightweight title is undoubtedly his ultimate goal, but he’s content to take each necessary step to build the experience that cannot be found anywhere but standing across the Octagon from another highly talented fighter. That is where Lee has the opportunity to truly test himself - his skills, heart and everything he believes he is as a fighter - and he’s confident he will continue to make strides toward getting to the top.

“Things are great and I’m at a good point in my career,” Lee said. “I’m still considered one of the up-and-coming guys, but I’m getting good experience as well. I’m fighting different styles and growing more accustomed to training camp each and every time out. I’m getting more comfortable with the process that comes with fighting and I’m taking all of the necessary steps to keep moving forward to become a champ.

“I’m winning fights and I believe I’m doing it the right way. Things are going smoothly and I can’t complain right now. I’m getting the momentum now, but I don’t really even think things have started yet. I’m just warming up and feel I’m in the pre-stages of my career. I think this fight with James is the right fight at the right time for me. I have a lot of confidence in myself because I know what I can do and I know I’m doing the right things now. I don’t think there is a man alive who can beat me - at least I haven’t met the man yet if he’s out there. When you are competing at the highest level of the sport it comes down to a game of inches. One or two inches this way you win, but one or two inches that way you lose. I’m very confident that I’m always on the upside of things.”