Kevin Holland Will Rise To Any Challenge

UFC Middleweight Kevin Holland Is Prepped And Primed For Any Challenge Ahead, Even His Second Main Event In Three Weeks As He Takes On Marvin Vettori at UFC Vegas 23
By McKenzie Pavacich, on Twitter @mpavacich_ • Apr. 9, 2021

It’s probably safe to say that almost no one expected to see Kevin Holland back in the Octagon just three weeks after his main event debut, for yet another showing under the brightest lights… except for maybe Holland himself.

But are we really surprised that in true “Trailblazer” fashion, when opportunity came knocking, he answered the door, and answered quick? With just a week’s notice, Holland agreed to step in to face Marvin Vettori after Darren Till announced he had broken his collarbone during training.

“I’m a company man at the end of the day. Whatever they want me to do, I’ll try and do it,” Holland told UFC.com ahead of his second main event in just under a month. “I love a good scrap. They offered me a chance to get a good scrap, so I’m here.”

"Fight popped up so I'm here."@Trailblaze2top discusses stepping into the main event versus Marvin Vettori, his trash talk, fighting for 25 minutes and what he learned from his bout with Derek Brunson 🔊⬆️ #UFCVegas23 pic.twitter.com/zj3zlCHLHx

A man of many personas, the “Last Second King” spent little time licking his wounds after his five-round unanimous decision loss to Derek Brunson just 20 days ago, and he was back in the gym to prepare for whatever was next -- even stepping in on short notice to face a fellow middleweight sitting four spots above him in the rankings.

It’s a mindset Holland has always had -- any place, any opponent, any time. A sentiment shared across the sport of MMA but exemplified by only a select few, Holland has offered a handful of times to step in for fallen opponents, successfully doing so twice now in the UFC.

“The difference in the mindset would simply be thinking and doing,” Holland explained. “Some people talk a lot and some people do. But one thing about me is I’m a doer. If I say I’m going to do something, I do it. I’m just that guy.”

So as a doer, can we believe the 28-year-old made famous for his audible dialogue mid-fight when he says he wants to beat Vettori with his skill, and not with his words?

“I don’t want to be underneath his skin when I beat him. I want to beat the very best Marvin Vettori I can get,” the middleweight said. “So if he whimpers and he worries away from the things that I say, and if it bothers him during the fight, that’s on him. But I’ll leave him all week to do what he wants to do, and then when it comes down to the night of the fight, we’ll get really active.”

While he said the only thing that intrigues him about this matchup is Vettori being “a boy playing a man’s game,” you can tell by his body language that Holland is ready to set the record straight with those who doubt his skill because of his loquacious approach to mental warfare, a tactic that has earned him the pseudonym of “Big Mouth.”

“Big Mouth was created through the media. Trailblazer gives you the knockouts, Big Mouth gives you a little bit of talking,” Holland said. “I have plenty of different personalities. It’s no big deal. I care less about what they say now and just care more about what I have to do.”

Luckily, what he has to do is something he’s become pretty familiar with: find a way to fight through the takedown attempts and grappling that Vettori will likely bring to the table.

“I expect him to go out there and believe he’s a good striker, and then once he feels what I have to offer, I expect him to do the same thing that Derek Brunson did: shoot like his life depends on it,” Holland said. 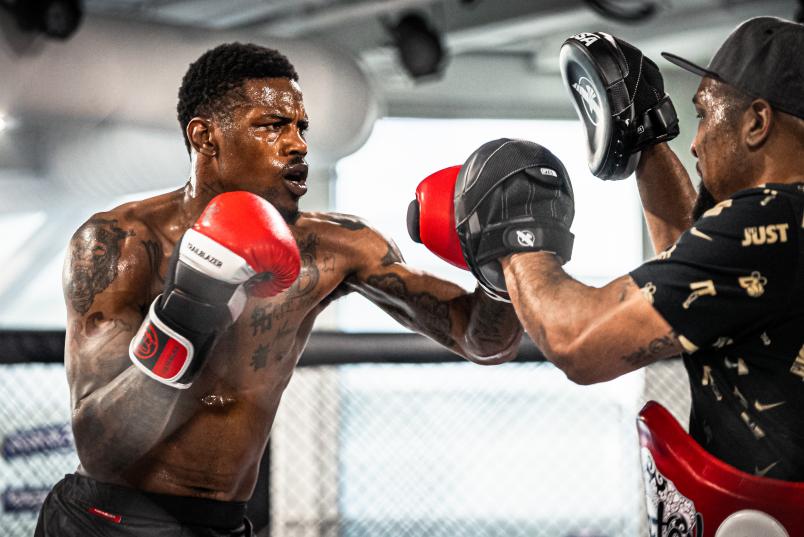 While there were surely a few lessons learned in his fight against Brunson, the 10th-ranked middleweight said the biggest takeaway from last month’s loss is that he’s prepped and primed for any 25-minute bout.

“I was so stressed out about five rounds, and it was easy as hell,” he said laughing. “The training going into 25 minutes was grueling as hell, but you fight one person for 25 minutes. It’s way better than fighting a fresh person every two minutes for 25 minutes.”

While Holland went undefeated through five fights last year, with four being by stoppage and three in the first round, it’s almost as if he’s found a new motivation in the challenge of five-round fights, regardless of who he’s locked behind the chain links with.

“I’m looking forward to fighting for a full 25,” Holland said with a smirk. “Fighting.”