Kevin Holland Wants to Get the Party Started

As the sports adage goes, the best ability is availability, and in Kevin Holland’s case, no fighter has been more available (other than maybe Angela Hill). Since the coronavirus pandemic briefly halted the UFC schedule in the spring, Holland has competed four times in the last seven months. Moreover, he’s been scheduled for a total of eight different fights. He is always around, and when he’s around, he’s making himself heard, and as of late, his performances are speaking loudly, as well.

A late-replacement opportunity planted him in his first main event against Jack Hermansson before a positive COVID-19 test scrapped the opportunity. As Holland is wont to do, though, he jumped at the opportunity to fight Ronaldo “Jacare” Souza a week later without hesitation. Unsurprisingly, the lost chance at taking out a Top 5 opponent in Hermansson – as Marvin Vettori stepped in and did in a Fight of the Night effort on December 5 – didn’t faze or discourage Holland at all.

“It’s all amazing,” Holland told UFC.com. “Getting a last-second main event was pretty awesome because I got a lot of exposure off of it, so that was dope. Losing something that was never mine doesn’t really ever affect me. It was never mine to have anyway, so I never really lost it.”

In his short yet eventful two-and-a-half years on the UFC roster, Holland has stepped into the Donald Cerrone-esque “anyone, anytime, anywhere” school of fighters with great success, going 7-2 with his lone losses coming to Thiago Santos and Brendan Allen. All the while, Holland has caught the eyes and ears of fans for his attractive and, at times, wild fighting style and penchant for talking his way through an entire fight.

Although he doesn’t get a chance to establish himself at the top of the middleweight rankings this weekend, Holland is eager to face Souza, a mainstay at the top of the division and the most credentialed fighter he has faced to this point in his career. As someone who is more interested in fighting frequently and against people who intrigue him, Souza is a perfect opponent for Holland.

Although that kind of respect puts a less-experienced fighter in the tricky position of navigating a face off against someone they’ve admired, Holland isn’t all too fazed about going into battle with a man he has watched for years. 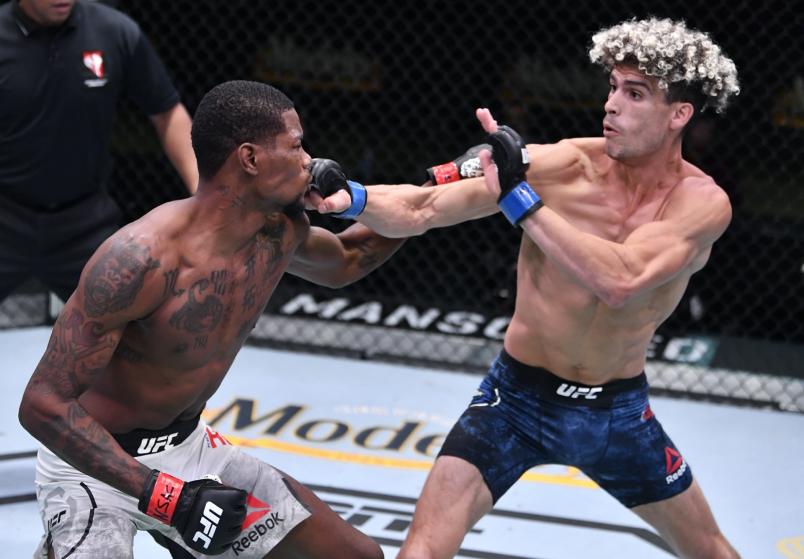 “It’ll be nice to see him do the alligator thing and all that,” he said. “I’ll crack a few jokes, and I’ll smile real hard. No matter what, we’re having a good time.”

As Holland threatens to climb the rankings, it begs the question whether he’ll pursue the same kind of frequency that has unlocked many of his opportunities in the UFC. The higher up fighters go, they often find fewer fights available that make sense for their career. Holland, naturally, pushes back against that possibility and jokes that he’d move up or down in weight to keep his schedule busy.

He does recognize his rising profile, however, making a point to get the attention of middleweight champion Israel Adesanya, who was in attendance during his most recent fight. Holland is wary of getting too far ahead of himself and is well-aware of the threats Souza presents, particularly on the ground. Yet despite Souza’s decorated submission record, Holland isn’t scared to hit the mat with the Brazilian, much to his coach’s chagrin.

“I don’t know how else to say it, but I love the f***ing fact that I’m fighting Jacare,” Holland said. “My coach doesn’t want me to go to the ground and play down there because he’s like, ‘You can just take the fight out on the feet.’ Unless Jacare agrees he’s going to do some type of jiu-jitsu match against my coach Travis Lutter, we can easily go to the freaking ground.”

When Holland makes the walk to the Octagon, it’ll be his fifth in seven months and, in 2021, he hopes to fight six or seven times. It’s that attitude which has won him fans, but not exclusively. His performances have made noise, as well, and as the demand increases, Holland is more than happy to continue providing the high-quality supply.

“Ain’t nothing like a cage party,” he said. “When Kevin Holland is in that cage party, the cage party gets poppin’.”