The logic made sense to Kevin Holland.

Though he was scheduled to fight Antonio Arroyo in Sao Paulo in November, he could step in for a fight in October, no problem.

“I figured I’d get two checks instead of one,” he said.

The promotion did book another fighter to replace him in Brazil, but that’s okay, because the opponent presented in Boston had Holland licking his chops. Brendan Allen, who is making his UFC debut in Boston, was a name Holland had in his sights when they both competed under the Legacy Fighting Alliance banner.

Beyond any personal history Holland has or doesn’t have with Allen, the California-native fashions himself after the likes of Donald Cerrone in the sense that he wants to build a reputation as an athlete ready to fight anyone, anywhere at any time.

So far, so good. Holland has fought five times since making his debut in June 2018, and he’s coming off a unanimous decision win in Greenville over Alessio Di Chirico. However, Holland injured his shoulder midway through the fight. While that makes his win all the more impressive, it forced him to sit out longer than he wanted.

With help from the UFC Performance Institute, though, Holland feels like he’s at full-strength despite accepting the fight on short notice.

That great feeling is compounded when the fights end in your favor, and for Holland, that’s been the case. He holds a 4-1 record in the promotion, and his lone loss is to former title challenger Thiago Santos. 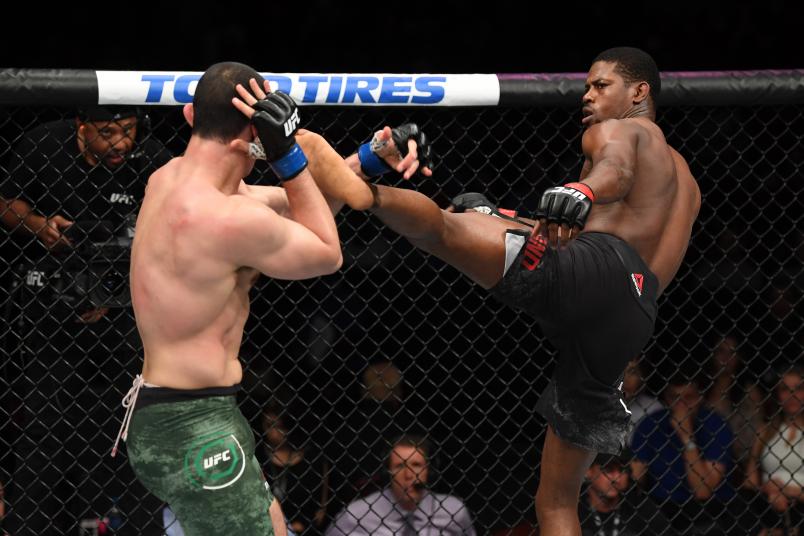 With Allen in his sights now, Holland aims to extend his current winning streak to four fights. While Holland is interested in the fight because he says Allen is “long-bodied” like himself, he also remembers wanting to square off against the 23-year-old because he “had a little clout back in the day” when they fought at the regional level.

And so, Holland finally gets his shot at Allen. Getting to fight in Boston also holds a special place for Holland, a self-proclaimed Los Angeles Lakers fan who is well aware of the history and rivalry between the Lakers and Boston Celtics.

More than that, though, Holland is excited to fight sooner than his previously scheduled date, and that’s really what matters to him.

“Think about it, you get kicked out of school when you’re younger for beating people up,” he said. “Now, I’m getting a check.”