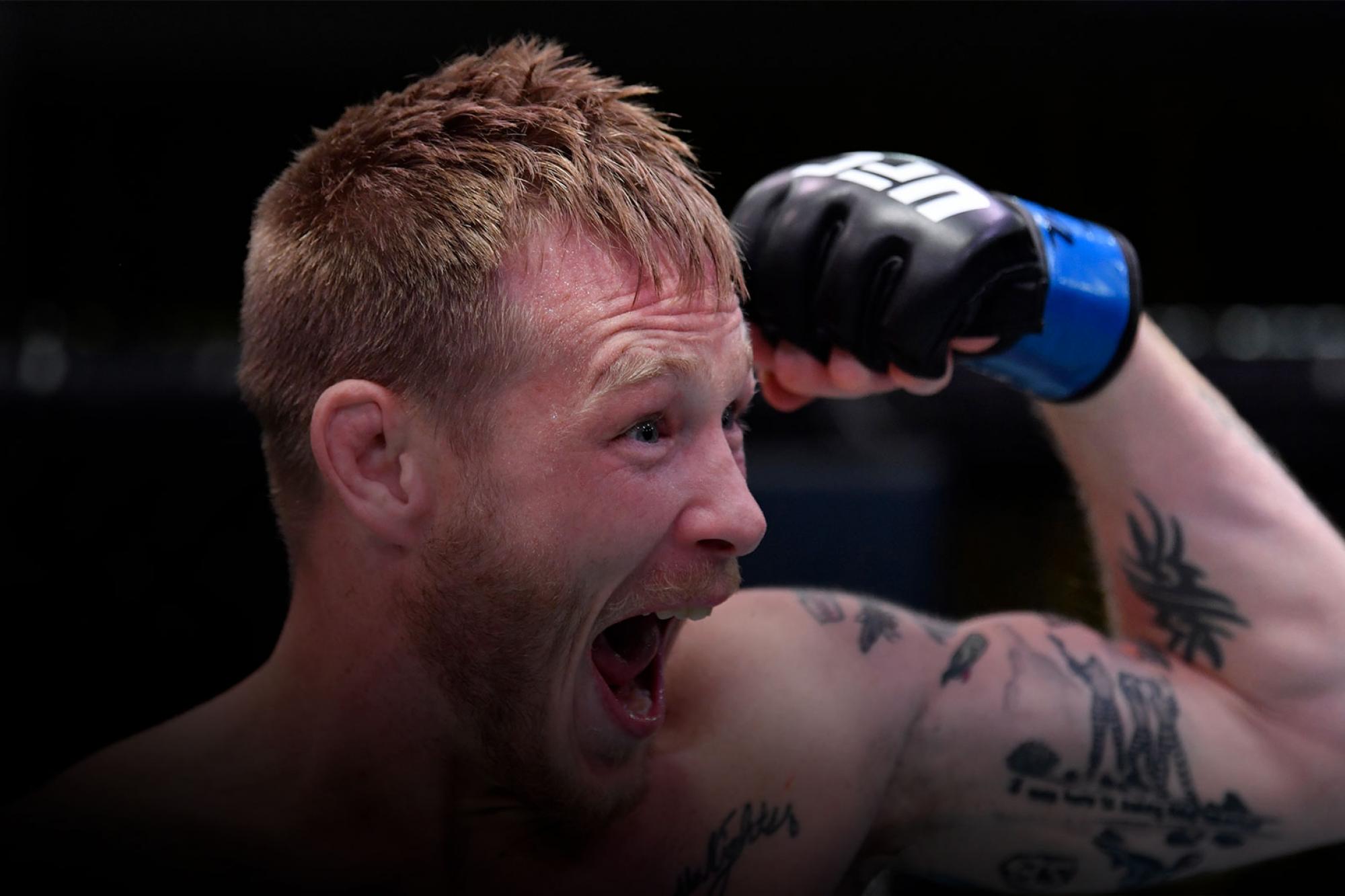 Kevin Croom always knew he had what it takes, but even he couldn't believe what all went down on Saturday night
By Thomas Gerbasi, on Twitter: @TGerbasi • Sep. 17, 2020

It appears that these days, no one can agree on anything. But after Kevin Croom’s 13-year journey to the UFC was capped off with a life-changing 31-second submission of Roosevelt Roberts last Saturday, we may have found a unifying force.

“Let's rally behind Kevin Croom for some unity in this country,” the man said with a laugh. “We can all get behind that I'm awesome.”

Few, if any, can argue with that, especially after the affable Missouri native, 33 years old and 33 fights into his pro MMA career, finally got the call to the big show on short notice and finished one of the top prospects in the lightweight division in less than a minute. Even fans of Roberts would have to admit it was a Hollywood story with four-ounce gloves, and as much as the MMA world enjoyed it, Croom is really enjoying his moment.

Fans, the press and his fighting peers agreed, lighting up social media on fight night. But the best Tweet may have been from renowned striking coach Brandon Gibson, who wrote, “I’m proud of Kevin. We still have some cutco knives in our kitchen that we bought from him during his stint as a salesman. Glad he finally made it to the big show.”

I tell Croom about it and he laughs.

Yeah, these are good times for the Kansas City veteran, who has now won four straight in a pro career that began in 2009. It’s his best run since 2012-14, when he won nine in a row, but even back then, the phone didn’t ring. It was frustrating at best, heartbreaking at worst, but Croom didn’t lose hope.

“There's more low points than I could ever say,” he said. “There's been more tears cried over this journey than I could count. There's been more wondering if I was making a stupid decision, if I should keep going on. But I decided that no matter what, I was investing in myself. I don't really gamble with my money, but I gamble with my health, so I made the gamble that it would all pay off. And it paid off.”

It did. Now everyone knows his name, a far cry from the beginning of last week, when he didn’t have a fight and didn’t know what was going to happen when it was time to pay the bills.

“On Wednesday I was trying to figure out how to pay my bills and that's something I don't have to worry about for a little bit now,” he said. “I feel like I've always had the odds stacked against me, I've been stressed about paying bills, I've had everything on my shoulders, but I kind of feel like I just evened the odds a little bit. I'm gonna work harder in the gym, but everything else just got easier.”

I guess the million-dollar question is, why?

“I guess I just don't know how to quit or I'm too dumb to quit or however you want to look at it,” said Croom. “It's what I love, and this is the only thing I've ever wanted. I remember being a 15-year-old, before I had ever actually watched an MMA fight, just knowing that there was something called Ultimate Fighting, and just knowing that's what I wanted to do. This is the only thing I've ever wanted, it's the only life I'm okay with living, so I was gonna give it my all. And f**k man, nailed it.”

Truer words have never been spoken, and while he’s retired “The Hard Hitting Hillbilly” name for the moment in favor of “Crash,” Croom has never forgotten where he came from and never takes for granted what MMA brought to his life. And now, he’s more than willing to have his story be a light for anyone who needs it.

“MMA saved my life,” he said. “In no uncertain terms, I'm pretty reasonably sure I would be in prison or dead if I hadn't found MMA. I was heading down a bad path, found MMA and it gave me a reason to not go out and get messed up. It really changed my life. So because of that, I'm very pro helping people change their life. I know what it's like to not come from the greatest circumstances and have a lot of pent-up aggression and not know what to do with it. And I got very lucky and blessed to find something that really helped me out and has given me an amazing life. My story is about persistence and dedication and you gotta be able to persist.”