“Honestly, for me, I’m never comfortable with it. I’m always going to be hungry and chasing it. I’m not comfortable right now. I want to have more fights.
By E. Spencer Kyte • Jun. 17, 2019

There was a stretch a few years back where it felt like each victory was going to be the one that finally earned Kevin Aguilar a call to compete inside the Octagon.

First it was when he won the Legacy Fighting Championship featherweight title by defeating Tony Kelley, pushing his record to 11-1 in the process. Then came the win over Damon Jackson, the former champion who had earned consecutive wins since returning to the promotion following a three-fight run in the UFC.

Next it was a unanimous decision win over Justin Rader, and when he knocked out former Ultimate Fighter contestant and Tuesday Night Contender Series alum Than Le in the first round, snapping Le’s eight-fight winning streak in the process, it felt like a certainty that the talented competitor fighting out of Longview, Texas would graduate to the big leagues.

But the call never came.

“For a moment there, I was getting bummed out like, ‘Dang — why don’t they like me? Why don’t they want me?’” admitted Aguilar, reflecting on his days positioned atop the featherweight division in one of the premier regional promotions in the sport. “I was just beating myself up, asking myself a lot of questions like, ‘What am I doing wrong? Who more can I beat?’ over and over again.

“At the end of it, I just needed my window, my chance, my opportunity, so when they called me for the Contender Series on short notice, I knew immediately I had to take it.”

Combined with his LFA bona fides, it felt like the opportunity Aguilar needed to finally secure a place on the UFC roster. Although he walked away with a split decision victory over Joey Gomez in an entertaining back-and-forth fight, his name wasn’t called and Aguilar was headed back to the regional circuit, though he viewed the entire experience as a huge positive.

“It was an opportunity for me to step in front of the UFC brass and show out,” he said of the win over Gomez. “They saw that I could step in short notice, any moment in time and be ready to put on a good show. I was okay with it (going back to the regional circuit) because I got to show out in front of them on short notice, up a weight class and it was a great experience.”

It also proved to be the face-to-face introduction he needed because a few months later, the UFC needed a featherweight to step in against Rick Glenn and Aguilar was there to pick up the phone, agree on the spot and ship up to Las Vegas at the end of November, where he registered a unanimous decision win in his promotional debut.

Four months later, “The Angel of Death” made his sophomore appearance in the Octagon, getting the best of underrated Peruvian featherweight Enrique Barzola, who entered on a four-fight winning streak.

After years of wondering if his time was ever going to come, Aguilar is now established as a full-time member of the UFC featherweight division, but don’t think for a minute that he’s gotten complacent or experienced a change in mindset now that he’s won a couple fights in the UFC.

“Honestly, for me, I’m never comfortable with it,” he said, who makes his third foray into the Octagon this weekend in Greenville, South Carolina against fellow Contender Series alum Dan Ige. “I’m always going to be hungry and chasing it. I’m not comfortable right now. I want to have more fights.

“I’m winding down to the end of my contract — I want to renegotiate after I go in there and beat Dan Ige and I want to keep going. I don’t want to stop. I’m getting fights consistently and that’s how I want to keep it, but that’s just me.”

It’s a mindset and approach forged by a desire to be the greatest fighter in the sport and fueled by a history of defying the odds.

“I’m in it to be the best in the world — that was my mindset from Day One and it’s my mindset now,” said Aguilar, who can push his winning streak to double digits with a victory on Saturday night at Bon Secours Wellness Arena. “I want to be the greatest fighter ever.

“If you’re jumping into MMA thinking, ‘I’m going to give it a shot,’ that’s the wrong mindset. You have to want to get punched in the face, kicked, choked, beat up, exhausted; you have to want all that and that’s what I want every day. 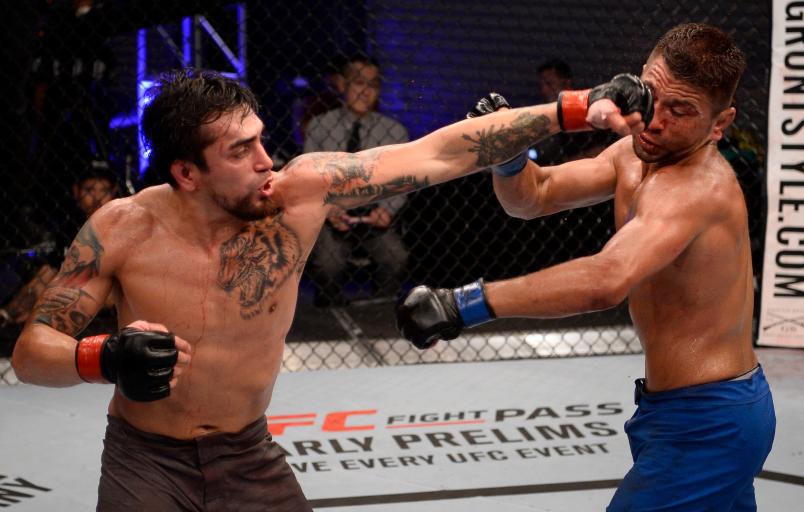 Despite all his success, the 30-year-old emerging talent maintains a very simple and straightforward approach, offering a variation on the “every fight, I’m 0-0” line of thinking offered by the man who currently sits atop the featherweight division, Max Holloway.

“Every fight is the next special fight,” said Aguilar. “(In terms of being 17-1 and potentially having a nine-fight winning streak) Those are great numbers, but I don’t even really think about them too often; I just think about the next opponent in front of me. Every opponent I face, I see them as the world champion.

“Dan Ige is the champion right now and I have to go beat him.”

Much like Holloway and many other fan favorites, there is something naturally exciting about the way Aguilar fights and his ability to turn every appearance into an entertaining scrap.

“I’ve got to go out there and put on a great show, but in doing so, I tend to stay pretty traditional,” he said of his fan-friendly approach inside the cage. “I don’t get flashy, I don’t throw my hands up and taunt; I let my natural fighting instincts make things exciting. I’m still composed and my expression never changes because my natural instincts and abilities will make it Fight of the Night without any of that added foolishness. My grit and hardcore approach is going to make it Fight of the Night.”

And that’s exactly how he sees things playing out with Ige on Saturday night.

“I honestly didn’t know much about Dan, but my coach said he’s a young, hungry, talented guy and he thinks he can beat you, so I was like, ‘Sign me up. Let’s go!’” admitted Aguilar. “But if we’re both hungry and we’re both out there for the same reasons, it’s going to be the best fight of the night, if not the whole year.”