Each and every day, Ketlen Vieira is living her dream.

The young girl from Amazonas who began training as a pre-teen with lofty ambitions and endless drive has grown to become a bona fide contender in the UFC bantamweight division and, this weekend, she makes her second consecutive headlining appearance against a second consecutive former champion when she takes on Holly Holm in the main event of Saturday’s fight card at the UFC APEX.

“I started training because I love this sport,” said Vieira, who registered a unanimous decision win over Miesha Tate in November to move her record to 12-2 overall heading into Saturday’s clash with Holm. “I've been training since I was 12 years old, and today being at the level of these athletes makes me very happy and fulfilled.

“My second consecutive fight against a former champion. I had a dream of at least once in my life being a UFC main event; God is wonderful, and this is my second in a row.”

The bout with Tate was a critical turning point for the 30-year-old Brazilian, who was positioned as a potential title contender following a hard-fought victory over Cat Zingano at UFC 222 before missing 21 months of action due to a serious knee injury.

When she returned, Vieira ran into Irene Aldana, suffering the first loss of her career. After rebounding with a win over Sijara Eubanks, she kicked off her 2021 campaign by landing on the unhappy side of a split decision verdict against Yana Kunitskaya that many felt the judges got wrong, in a fight where she unfortunately missed weight.

Rather than lament the outcome and linger on his mistakes, Vieira pressed forward, signed on to face Tate in her second fight since returning to action, and stayed focused through a six-week delay when the fight was rescheduled.

RELATED: Holly Holm: ‘You’re Not Going To Get Past Me'

From the way she performed, you wouldn’t have known it was the first five-round fight of her career or the first time headlining a UFC event.

“I was very happy in my last fight because it was against a former champion, in addition to being the first time to fight for five rounds against a great athlete,” Vieira said of the clash with Tate, where she secured a unanimous decision victory by distancing herself from the former bantamweight titleholder in the latter rounds. “It’s very important to keep winning, especially against an athlete as renowned as Miesha.

“It was a personal achievement and I’m happy for the victory.”

Now six months later, she’s ready to do it again, while maintaining a similar outlook.

When we spoke ahead of her fight with Tate, I asked Vieira if she felt a victory would elevate her into position to challenge for the title in her next appearance.

“I don’t know if this fight takes me to a future title fight, but it puts me in the mix,” she told me at the time. “I believe that by winning this fight and one more, I will earn a title shot.” 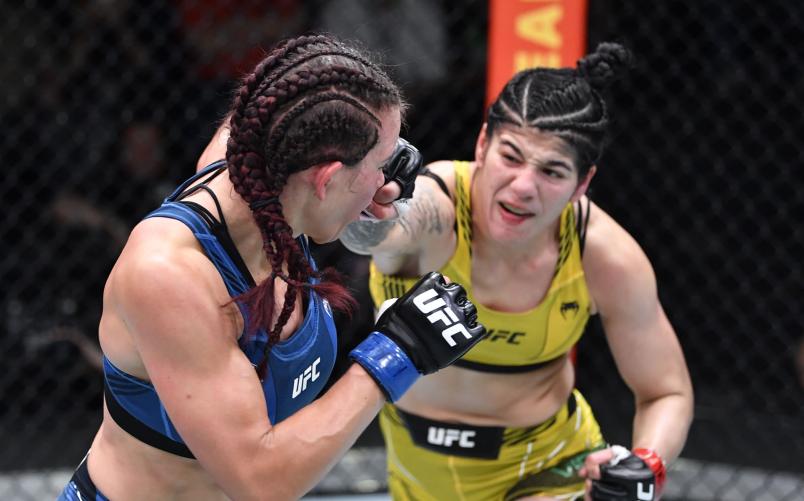 She added that her sole focus was on Tate, acknowledging that anything that may come in the future was contingent on getting her hand raised that evening.

She accomplished that feat in November, and when I reminded her of her words from ahead of that meeting and asked if they still held true, she reiterated her previous position.

“I said that after beating Miesha, and now, it will be the same thing,” said Vieira. “I'm only focused on Holly and I don't want to think about the future right now.”

Staying exclusively focused on Saturday’s meeting with Holm is a wise approach, as “The Preacher’s Daughter” has only lost one non-title fight in her career, and that was against former bantamweight title challenger and current flyweight ruler Valentina Shevchenko nearly six years ago.

While she’s had setbacks since, they’ve each come in championship bouts against Hall of Fame caliber athletes, and she’s posted four emphatic victories in her other four assignments, including earning back-to-back wins over Raquel Pennington and Aldana in 2020 before being sidelined for all of last year as a result of a pair of ailments.

Driven to claim championship gold for a second time and propelled a little more by her induction into the International Boxing Hall of Fame in June, Holm knows she’s the perennial contender everyone is targeting in hopes of earning a championship opportunity with a win, and she’s bent on showing that she’s not interested in being anyone’s stepping stone this weekend.

Vieira knows she will have her hands full on Saturday and refuses to accept that anything about this weekend’s main event will be easier having already navigated a five-round fight last time out.

“A fight is never easy; we prepare a lot, but anything can happen, especially in front of another great athlete,” said Vieira, who holds a black belt in Brazilian jiu jitsu under Andre Pederneiras, as well as one in judo. “There is no easy fight and no comfort zone where I am now.

“I see the fight with her as a very difficult fight,” she said of the meeting with Holm. “She is very good and very experienced.”

But like her opponent this weekend, Vieira is also striving to secure an opportunity to fight for championship gold, and having prepared to the best of her abilities, she’s ready to place her fate in God’s hands and give her all in hopes of garnering the biggest victory of her career for a second consecutive outing.

“I trained a lot and prepared a lot, as always, and I believe in myself and in God,” she said. “God only knows how my hand will be raised, but I will do everything, and I will do my best to make it happen.”