"If you aren’t having fun doing all that goes into being a fighter it’s time to go on toward something else." - Kenny Robertson 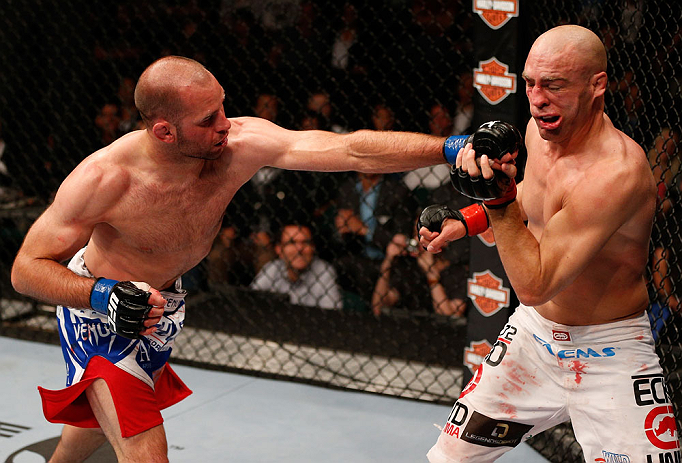 As soon as the clock hits at 7:15 AM at Metamora Township High School, the school day has officially begun and everyone has shuffled their way inside their respective classrooms.

But it’s not just the students that have to be organized and ready to go, as the teachers also have to be mentally focused. UFC fighter Kenny Robertson - or as his students call him, Mr. Robertson - has the distinct duty of preparing his woodshop class while thinking about his mixed martial arts career, something he likes to call his hobby.

It comes to some as a surprise that he is a full-time teacher and not a full-time MMA fighter. But every day when he enters his classroom and prepares for his students, he is content with where his life journey has taken him.

“I’ve been doing this for a very long time and enjoy teaching and building things with details and power tools,” he said. “Right now, I am happy where I am, and with all the support from the administration, there are no issues. Sure, I miss a few days here and there, but the principal loves watching the fights and is really interested in the sport. So the balance factor is pretty simple and I’m glad I can focus on both my real job and hobby.”

As Robertson lives a dual life as a teacher and a mixed martial artist, many of his students are still intrigued with the novelty factor of their teacher being a UFC fighter. But Robertson agrees that the distraction is minimal when the books open and the classroom door closes.

“The kids ask me about me as a UFC fighter, it’s not something that I try to hide or want to ignore. I’m glad my students are interested in me fighting because it means more are watching the sport and gaining interest. We talk here and there during class, but when it comes down to it, the kids know when to pick up the books and learn.”

Learning is a big key for his students as they attempt to move on to the next step in their lives. The same goes for the fighter, as he figures out what it really takes to train and develop into a better fighter, even if he needs a little motivation sometimes.

“My training always goes well, but there’s always a point where I just get sick of it,” Robertson said. “But my wife is always there to push me when I’m down or don’t feel like doing anything. She really is the backbone of my career, and knows when I have to make that extra effort. I met my wife at my first fight and she’s always been there for me ever since. It’s relaxing to know that you have somebody besides your coaches and trainers that is always looking out for you. I would definitely not be where I am today without her.”

Getting that support has been very important for Robertson over the last year. With his last fight a decision loss to Sean Pierson in June of 2013 and not fighting since then, it could wreak havoc with anyone’s focus.

“The layoff has been sort of a time to get back to the basics. Of course I don’t like fighting that with that much time in between, but what can you do? I was supposed to fight Joao Zeferino last September, but I injured myself and had to pull out the fight. That was frustrating, but I always kept busy with my job at the high school, so I really never had downtime to dwell on my next fight.”

Come this Sunday in Brazil, Robertson will get that next fight, with Thiago Perpétuo the man trying to hand him a second straight defeat. Perpetuo is coming off a loss himself, even though he picked up Fight of the Night honors against Omari Akhmedov. As for Robertson, he knows he won’t be the fan favorite when he steps into the Octagon, but that is just fine with him.

“Of course I’m going into hostile territory, but I don’t speak Portuguese, so I won’t understand what they are saying,” he laughs. “I hardly ever hear people when I’m fighting anyway, because I go into another zone. Yes I’ll be the so-called ‘heel,’ but when it comes down to it, I’m focused on one person and that’s Perpetuo. Most importantly, I’m going down there to have fun.”

When it comes to the achievements and failures of a MMA fighter, there is a fine line between having fun and being serious. Many struggle to balance the two, but after 15 fights, fun wins out every time for the 30-year-old.

“Living your life has to be always about enjoying it and having fun. I’ve seen over the years that too many fighters are in the cage with that stern look and they exit the cage the same way. Being in this fight business, I’m always looking to have fun. If you aren’t having fun doing all that goes into being a fighter it’s time to go on toward something else.”

Whether it’s teaching kids how to build something in his classroom or entering the Octagon and throwing punches with somebody, he is enjoying it.

“No matter what happens, win or lose I am enjoying life more than ever right now. This hobby is something that I never thought would have come into fruition, and now I’m fighting in the biggest company of this sport.”