"I think every fighter should try to be a finisher. I don’t think anyone wants to be that person who is always in an
all-out war for a decision every time." - Kenny Robertson 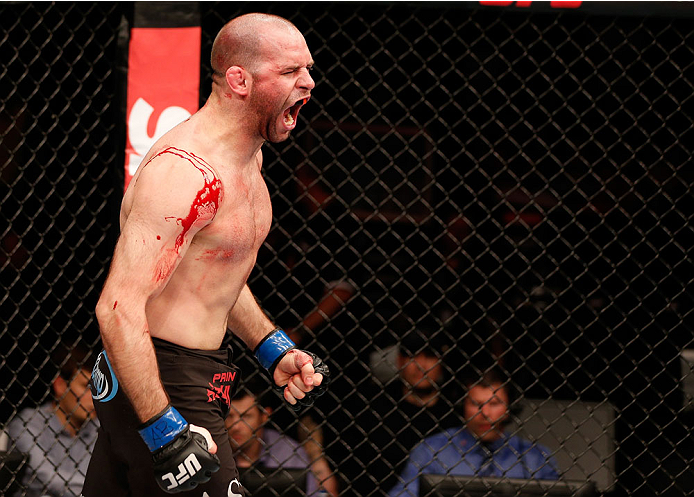 Jiu-jitsu doesn’t need to be pretty.

Nowhere is it written that submission artists are required to use finesse. Sure, plenty of grappling wizards will work grips, body positioning, and arm & leg placements all towards a clean tap-inducing ending. On the other hand, some fighters tenderize their adversary with hammerfists until they give up their back and neck for a quick reprieve from the ground and pound.

The final wrestler to represent the storied Eastern Illinois University program - which produced UFC Hall of Famer Matt Hughes - in the NCAA Division I championships has carried with him the same punishing mat mentality into the Octagon and it was on full display in Robertson’s most recent outing at UFC Fight Night: Shogun vs. Henderson 2. As Robertson explained to me last year in a previous interview, EIU’s head coach Ralph McCausland taught his wrestlers to not only take positions, but to grind one’s opponent until they make a mistake.

“Ralph McCausland was a great coach and a hell of a guy and still is,” affirms Robertson. “His style of leg riding and grinding on someone to break them so that they will give up something works particularly well for finishing. You're grinding on someone's shoulder and they want to put their shoulder down to get pinned. I've been going to Kennel Fight Club in Springfield, Illinois, and some of [former coach of Matt Hughes] Marc Fiore’s guys train there, and every position I put them in there is always a little pain or discomfort. I don't just hang out. They say that reminds them of when they used to go with Matt [Hughes]. Positions are great, but if you put your shoulder into their throat a little bit that will make them uncomfortable and they'll think about their throat more than an armbar or kneebar or whatever you throw at them.”

Back in March, it was more than simply grinding a shoulder inside the UFC cage as Robertson blew through Thiago Perpetuo’s guard, jumped right into mount, and began dropping piston-like punches to The Ultimate Fighter Brazil alum’s face. Stuck between a rock and a hard place, the bloodied Perpetuo was forced to make a move and gave up his back, which gave Robertson the opening to sink in a rear naked choke. Only 1:45 into the first round and Robertson had done the near impossible of finishing a Brazilian in Brazil.

“That’s always something that can happen, but that was probably the best it could go,” tells Robertson. “That’s what you train for. That’s what you visualize. Also, you visualize the other end of the spectrum when you’re in a grind and you have to just beat on him and he’s beating back. I was mentally prepared for a battle just like you have to be to go into one of these fights. I’m glad it was short. When I was done, I had a lot of extra energy. I’m OK with winning fights that way.”

At 30 years old with a 13-3 pro record, stoppage victories are nothing new to Robertson, as the most recent exciting win was his 12th finish and second submission inside the Octagon. The first sub was the memorable “kickstand” modified kneebar - to some the “Suloev stretch” dubbed for UFC and PRIDE veteran Amar Suloev - Robertson snagged on Brock Jardine to earn a Submission of the Night winner at UFC 157.

“I think every fighter should try to be a finisher,” asserts Robertson. “I don’t think anyone wants to be that person who is always in an all-out war for a decision every time. Some guys might like it, but I don’t. I want to go in there and beat somebody up and go home and still be able to walk the next day. I’m not saying that I’m not willing to go in there and go blow for blow and do that amazing decision. I just think it is smarter to go for the finish and I think that is what we’re there for - to win a fight, and the best way to win a fight is quick.”

Up next for Robertson, the Illinois native will celebrate 4th of July weekend in Las Vegas at UFC 175, battling Ildemar Alcantara. With a 3-1 record inside the Octagon, “Marajo” secured a Submission of the Night in his UFC debut as a light heavyweight before dropping 35 pounds to earn a pair of wins and a lone loss at welterweight. After nearly a decade as an MMA pro in his native Brazil, Alcantara’s bout with Robertson will mark his first trip to compete in the US.

“He’s a big strong guy,” reveals Robertson. “He looks like he hits kind of hard. He looks like he likes to use his hands to get into the clinch and take it to the ground and beat you up or submit you - whatever he wants to do. It’s his first fight in the United States, so that might be an issue for him, but that’s not something you can rely on. I think he’ll be a tough guy and it will be a fun fight.”

In preparation for “Marajo”, Robertson is busy crisscrossing the “Land of Lincoln” in search of the best coaches and the savviest sparring partners. When not in the cage, Robertson holds the title as the toughest high school woodshop teacher Metamora township could have ever hoped for, which means Robertson has to cut his time in half between the school and the gym. With school out for the summer, Robertson has been able to fully dedicate himself to his workouts with Muay Thai coach Ryan Blackorby of the Peoria Athletic Club, strength and conditioning at Human Performance Lab, and sparring at the Kennel Fight Club.

Not only is he busting his butt in the gym, but Robertson has given himself an attitude adjustment for 2014 to simply have more fun with this gritty hobby of his.

“I’ve kind of changed my philosophy on how to prepare for a fight a little bit,” says Robertson. “I’m trying to have more fun with everything. Enjoy fighting and not thinking like, ‘I’ve got to work out again, I’ve got to work out again.’ I’m having more fun with workouts and I’m more relaxed. I try to see more punches as well as throw them. I felt really relaxed for that last fight and I just make sure I’m working out with good people. That’s the big thing for the most part. I just try to keep improving myself and, hopefully, it will show even more in this next fight.”

On July 5th at UFC 175 in lovely Las Vegas, the former Eastern Illinois Panther will aim to continue his “dirty wrestling” tradition as Robertson aims to break Alcantara toward a decisive win. “I don’t like leaving it up to somebody,” states Robertson, whose offensive approach, usually, makes for a fun night for fight fans and a highlight reel win for himself. As Robertson told me last year, “I'll grind on the guy, I'll beat on the guy - I'm just trying to go out there and get that W.”

Robertson doesn't make it sound pretty, but it does sound effective.