For New York fighters like Chris Weidman, Rashad Evans and Rafael Natal, November 12 is a date they won’t ever forget as they compete in Madison Square Garden for the first time. Yet it’s a native of San Luis Obispo, California – Tim Kennedy - who may have the deepest connection to the Big Apple as he prepares for his UFC 205 bout against Evans.

“I enlisted into the United States Army because of 9/11,” Kennedy said, recalling the terrorist attacks of 2001 that devastated a nation and brought it together as well.

Ten days before September 11, Kennedy had just turned 22 years old, and like many young people that age, was working a job that wasn’t a destination, but a blip on the journey. That journey changed significantly that morning.

“I was sitting at a computer in California during the dot.com bubble,” he said. “I was answering customer service emails on the east coast, so I had gone in early that day, and I watched the second plane crash into the tower live. I was standing at the recruiter’s office that afternoon.”

Kennedy went on to become a decorated member of the United States Armed Forces and an American hero. And when he sets foot in New York City less than two weeks from now, it’s not just another fight.

“New York was the genesis of who I am and what I became,” he said. “To become a Special Forces sniper, a Ranger-qualified Green Beret, having gone to every single corner of the world, fighting terrorism for America. And New York is the beginning of all of that for me. My family – my dad, my grandparents – they’re from upstate, so I have a connection to the state itself, and it’s significant to me on a lot of different levels. It’s the jewel of the American spirit, it is the true melting pot, it’s the cornerstone of what America is. Even though the state itself and the politics and all that junk don’t necessarily jibe with who I am, New York is America. It’s still blue collar, it’s still hard work, it’s still the Yankees, it’s still everything that sometimes we wish we were and sometimes we’re not.”

If that doesn’t make a New Yorker a fan of Kennedy, nothing will. But there will still be those who boo him on November 12 simply because he’s fighting Niagara Falls’ Evans. He’s cool with that.

“It’s fine,” Kennedy laughs. “It’s one of the endearing characteristics of New York, how passionate and loyal New Yorkers are to their teams, to their athletes. There could not be more loyal and committed fans. So I’ll go out there, and if they’re booing me, I’ll still be proud that I’m fighting in New York.”

Emotions aside, Kennedy is more than focused on the task at hand next month. Despite Evans’ resume at 205 pounds, where he was light heavyweight champion and a constant presence in the top 10 before and after winning the belt, “Suga” will be making his maiden voyage to 185 pounds, and as far as his opponent is concerned, that’s a trip into a shark tank the likes of which he’s never seen before.

“The speed is definitely different,” Kennedy said of life at middleweight. “The power’s the same. Luke (Rockhold), Jacare (Souza), myself, Chris Weidman, Derek Brunson – everybody hits hard and everybody’s fast. They have the speed of the 155, 170 guys and the power of the 205 guys. I think the 185 division is the most dangerous and the most athletic in all of the UFC. If you look at the top 10-12 guys, it’s scary. It’s a frightening group of dudes.”

Kennedy remains one of the scariest, despite being out of action since September of 2014. Following his controversial 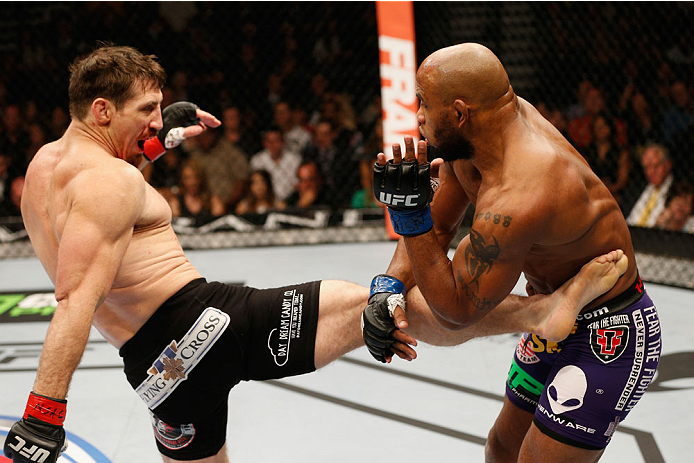 loss to Yoel Romero, he’s kept his spot in the top 15, but he hasn’t graced the Octagon. That doesn’t mean he was sitting around getting fat. Most notably, Kennedy starred in The History Channel series “Hunting Hitler,” but there were also plenty of activities to keep him busy. So busy that he even hinted that he might not even return to the Octagon. To some, that might mark Kennedy as someone who’s heart isn’t in the sport anymore. But in reality, fighting because he doesn’t “need” it makes the 37-year-old even more dangerous.

“This fight is fun because of the historic implications and maybe even the title implications, but I don’t need fighting for the competitiveness because I have that in every other area of my world – competitive shooting, jiu-jitsu,” he said. “It breaks my heart because the vast majority of athletes, this is the only thing that they can do. This is how they’re gonna put food on their family’s table. They do this with the hope that this could be the big one, that this could move them to that next level, that could put them to that next tier and get them on that Madison Square Garden card. Ultimately, I think that makes for a desperate fighter. Somebody that does it because they want to and because this is what they love to do, that’s dangerous.”

Tim Kennedy still has the love. So much so that he would love to get another crack at a man he defeated back in 2014 – current middleweight king Michael Bisping.

“I’ve been with and beaten most of the guys at the top, including the champion,” he said. “If you go back and look at my Jacare fight, it wasn’t controversial like the Yoel Romero fight, but everyone else in attendance thought that I beat him that night. And Yoel, I still can’t even count that as a loss. I knocked him out, he didn’t answer the bell. In every world of pugilistic competition, that’s a loss (for him). I have a huge win over the champion, I’m 4-1 in my last five fights with my only loss being a super controversial, asterisk loss. A win here (against Evans) in decisive, explosive fashion, you have to say, ‘Should Tim Kennedy be fighting Michael Bisping next?’ But you’re never going to hear Michael Bisping say my name. If he fights me, I can knock him out, I can submit him, or I can brutalize him for 25 minutes like I did last time. I can do that anytime, and he knows it.”