After Two Stunning Comeback Wins, Kennedy Nzechukwu Hopes To Get Off To An Even Better Start At UFC Fight Night: Holloway vs Rodriguez
By Gavin Porter, on Twitter @PorterUFCNews • Nov. 12, 2021

In both his bout against Carlos Ulberg and his fight with Danilo Marques, Nzechukwu appeared to be pushed to his limits. But Nzechukwu’s confidence never wavered as he continued to implement his pressure-filled game plan until he was able to break his opponents.

While the 29-year-old from Nigeria appreciates the accolades and is happy that he’s being lauded for his determination, he isn’t happy with the way he’s fought so far.

“I think the past two fights didn’t show much about me because I’m still learning on the job. I know I’m a slow starter and most fighters show their talents right off the bat but I think I’m getting the experience and eventually I’ll get to show my whole skill set,” Nzechukwu told UFC.com. “I think it showed my determination and my heart, but I definitely want to show more of that. I think that experience plays a huge role, especially when it comes to fighting on this huge stage. I think I need to get as much as I can so that I can showcase everything.”

MORE FIGHT NIGHT: Fight By Fight Preview | Fighters On The Rise | Max Holloway Isn’t Afraid of The Hard Path | What Yair Rodriguez Wants With All His Heart

One trait that Nzechukwu is focused on showcasing when he faces Da Un Jung at UFC Fight Night: Holloway vs Rodriguez is fluidity. He wants to show improvements in all aspects of mixed martial arts and be able to dominate no matter where the fight takes place.

Although he’s prepared for surprises in his fight with Da-un Jung, he believes he has a good idea of how the fight will go down in the UFC APEX on Saturday.

“It’s going to be entertaining fight, a fast-paced fight, with a lot of pressure and forward aggression, and although we are on the prelims, I think fans should tune in for this fight because we are both going to bring it and not take a step back,” Nzechukwu said. “It’s not going to go three rounds; one of us is going to drop. I just want to bring the excitement.”

At 6’5” and with a reach of 83 inches, there aren’t many fighters with the physical frame of Nzechukwu. His size, reach and willingness to take the fight anywhere makes him a tough matchup for just about any fighter, and that’s why Nzechukwu believes he must impose his will on Jung to hand him his first UFC defeat.

“I know he has great striking and has underrated jiu jitsu and he showcased that in his last fight against William Knight. I think he’s a well-rounded fighter, and he’s a tough guy and a durable guy with a good chin. I just gotta go in there, push the pace and impose my will on him,” Nzechukwu said. “I just want to get the victory and keep building my legacy.” 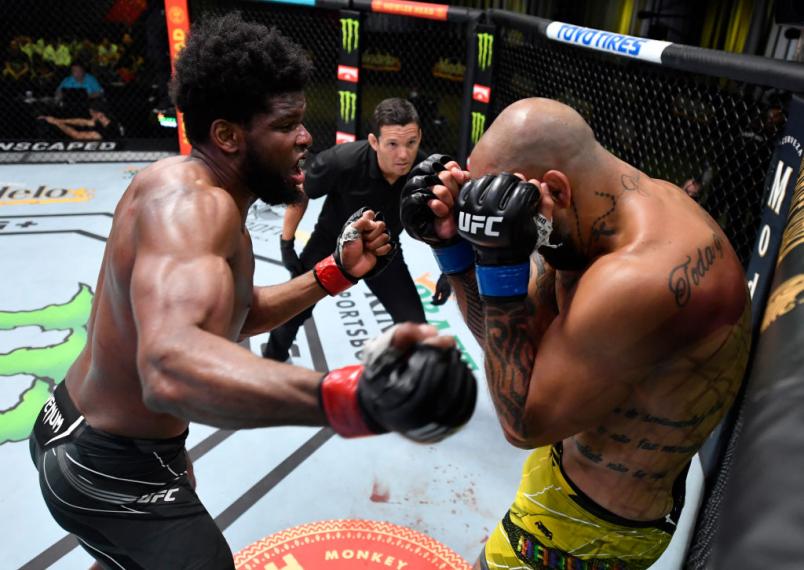 One thing is for certain, if Nzechukwu’s fight with Jung is anything like his wins over Ulberg and Marques, he will keep adding to his legacy as a must-watch fighter. That might not be Nzechukwu’s main goal, but with his skill set and his mentality, he’s quickly becoming one of the true rising stars in the UFC's light heavyweight division.

And who knows, maybe he’ll make it three straight bonuses.

“I just leave that in God’s hands. Let his will be done. I just keep getting those wins, building my legacy, and climbing the leaderboards,” Nzechukwu said. “But if I do get it, that would be awesome. I get to throw that in the bank again.”