Kennedy Nzechukwu Is All About Resiliency And Discipline

Despite His Last Win, Kennedy Nzechukwu Saw Things He Didn't Like. He Went Back To The Drawing Board To Push Himself To New Limits
By Zac Pacleb, on Twitter @ZacPacleb • Jun. 24, 2021

Kennedy Nzechukwu is less than five years into his professional MMA career, and yet he speaks about the fight game with the poise and awareness of someone who is much deeper into their life in the fight game. He acts with that same control in the Octagon, as well, which he displayed in his gritty comeback win against Carlos Ulberg at UFC 259.

“I think I showed the fans just my resilience and toughness,” Nzechukwu told UFC.com. “But in this sport, that’s not going to cut it. You will have to use your brain and intelligence to figure out different game plans and use it when it comes down to it. I still think I showed my fans my toughness and mental toughness, so as time goes on, as I continue to grow gradually in the sport, I do want to utilize other aspects of my game where I’m being clever and making smart moves, not just walking through shots like that.”

Catch All The Action With Your ESPN+ Subscription

Nzechukwu believes he took too many “unnecessary hits” against Ulberg early in the fight, and even though the fight was “awesome for the fans,” it highlighted some weaker areas of his game. So, the next week, he went back to the lab at Fortis MMA, where he and Sayif Saud worked on making those tweaks – namely utilizing more movement and starting quicker.

The self-awareness the 9-1 Nzechukwu exhibits is a credit to him as well as his team at Fortis MMA. Many of the fighters coming out of the Dallas-based gym relay a high amount of loyalty and appreciation for their teammates and Saud. This is particularly true for Nzechukwu.

"I'm going to come here and impose my will on him and try to get the W."

Kennedy Nzechukwu talks about the adjustments he has made leading up to his light heavyweight bout with Danilo Marques at #UFCVegas30 🔉⬆️ pic.twitter.com/nYkNdEK8zR

“It’s amazing because (Saud) sees stuff I don’t see on my own,” Nzechukwu said. “Sometimes, we tend to live in our own little world seeing a little piece of the puzzle, but he can see the whole picture because he’s been there. At this point right now, everything he says, I just listen. I try to grasp it because I know he has so much experience that if I could be able to tap into a little of that, it’s going to take me far.”

Next up, Nzechukwu has Danilo Marques in his sights. The Brazilian standout is unbeaten in two trips to the Octagon, and while Nzechukwu has only one more UFC bout under his belt, he feels any experience edge he can get is an important one.

Nzechukwu’s balance of humility and confidence speaks well to his upbringing and personality. It’s what helps him in the gym as well, working with the likes of fellow light heavyweights and teammates Ryan Spann and Alonzo Menifield. It’s the old adage of “iron sharpens iron,” and having that high-level of training partners in the room helps Nzechukwu push himself beyond his known limits with regularity. 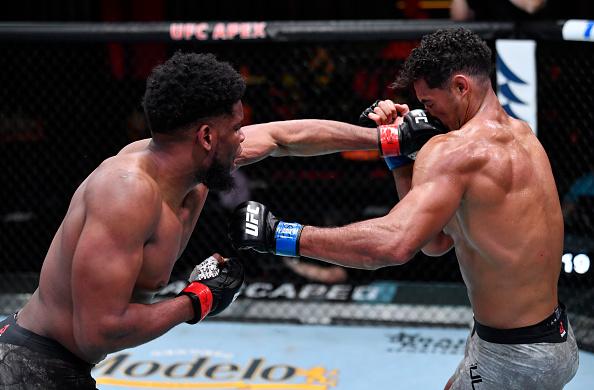 Kennedy Nzechukwu of Nigeria punches Carlos Ulberg of New Zealand in their light heavyweight fight during the UFC 259 event at UFC APEX on March 06, 2021 in Las Vegas, Nevada. (Photo by Jeff Bottari/Zuffa LLC)

In making his quickest turnaround between fights, Nzechukwu is happy to not only make up some ground in that area but also to test himself and build momentum in his career. As he continues to make his way through the wide-open and talented light heavyweight division, it’s easy to see why many were high on Nzechukwu when he first debuted in the UFC. His physical prowess is right there, but his mentality and work ethic are also in the right place to maximize those talents. His response to success has been to work even harder, raising that ceiling even higher, and he gets another chance to make a step up to that ceiling on June 26.

“As a person, I’m the same,” he said. “I’m always going to remain the same because I’m not going to let external factors change who I am. I’m always going to be humble because where I come from, humility matters. Being resilient and disciplined, it plays a huge role in your life.”