"He accepted the fight versus me and I respect him for it. He’s gonna try
to move up the ladder and use me to do that but I’m not gonna let him
off so easy." - Kelvin Gastelum 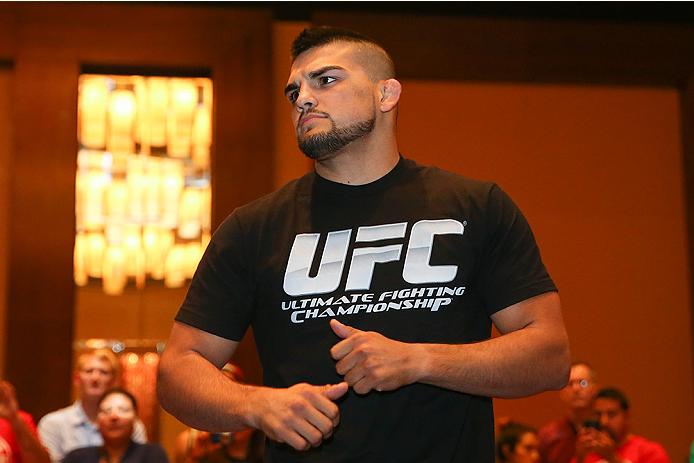 Even if they’re complimentary, comparisons aren’t the type of things fighters want to hear. No one wants to be called “The Next so and so” or a clone of a current or former world champion. But how could you look at welterweight prospect Kelvin Gastelum and not think that the Wikipedia moniker he’s been given “Mini Cain” is more accurate than any other comparison you could think of these days?

Again, that’s a compliment to be compared to UFC heavyweight champion Cain Velasquez, and Gastelum takes it as such.

“I’ve seen people on the forums calling me ‘Mini Cain’ ever since the show,” said the Ultimate Fighter season 17 winner. “It doesn’t bother me none, and I think we’re heading in that direction. I look up to Cain’s career and I want to follow in those footsteps. He’s a champion and I want to be a champion; he’s representing the Latinos, the Mexicans, and so am I.”

At just 22, Gastelum has done a remarkable job of dealing with the spotlight in his first year on the roster, something he zeroes in on immediately when asked to describe the past 12-plus months.

“This year has been crazy,” he laughs. “It’s been a year of a lot of change personally. I’ve changed, I’ve grown up a lot, and I’ve been able to come out of my shell a little bit. The UFC really puts the spotlight on you and I was never really used to a lot of attention. So there’s been a lot of change, a lot of growing up and a lot of learning. I’ve still got a lot more to go, but it’s been awesome.”

It’s hard not to compare it to Velasquez’ rise. Both were shy kids who wanted to let their fighting do the talking, but when you’re fighting and winning, people want to know more. They want to talk to you and learn your story. Velasquez eventually eased into that role, and not Gastelum is following suit. And in a promotion where everyone can fight, often it’s the ones who can handle everything else the best two go on to win titles and become stars.

“You do get a lot of attention and you have to deal with a lot of pressures outside of fighting, dealing with business, with sponsors, with family, and with personal stuff,” Gastelum admits. “And you have to deal with it on top of fighting. I think you said it right; the guys who are the champions are the ones who are able to handle that and really progress in their careers. I’m working on that. I’ve worked with life coaches and sports psychologists, really trying to get a hold of myself and my career, and Mike Tyson said it best: the easiest part of fighting is fighting. Everything else is hard to really handle. So the ones that do handle it are the ones that really have the success.”

Once you get that under control, the fighting usually takes care of itself, but that doesn’t mean there aren’t hiccups along the way. For Gastelum, his hiccup was veteran Rick Story, who took him into some deep waters in their UFC 171 bout before the Arizonan bounced back to take a hard-fought split decision win. It was the kind of fight he wasn’t surprised to find himself in.

It was, but that doesn’t mean Gastelum doesn’t want to repeat it in Saturday’s co-main event against Sweden’s Nico Musoke. That meant endless viewings of the Story fight and the subsequent sewing up of the holes that almost cost him in March.

“I got rocked (against Story), and looking back at the video you see the mistakes and the things you could have done better, and I’ve seen that video at least a thousand times, so I see where I can improve,” he said. “That’s just the person I am; I rise to every occasion and, luckily, I was able to overcome all the challenges. I learned a lot in this fight.”

You could almost hear Musoke saying the same thing, considering that he got rocked in his last fight as well against Viscardi Andrade before clearing his head and taking the decision win. This toughness and resilience isn’t lost on Yuma’s Gastelum, who knows that he’s got a fight ahead of him in San Antonio.

“He’s a tough guy,” said Gastelum of his foe. “He was in the same position I was (in the last fight), and I see a hungry guy working his way up. He accepted the fight versus me and I respect him for it. He’s gonna try to move up the ladder and use me to do that but I’m not gonna let him off so easy. I’m not trying to be a gatekeeper for anybody; I’m trying to move my way up.”

That ride may be a fast one, as fans and the media are starting to take a good, hard look at someone who may inspire aspiring fighters to be a “Mini Kelvin.”