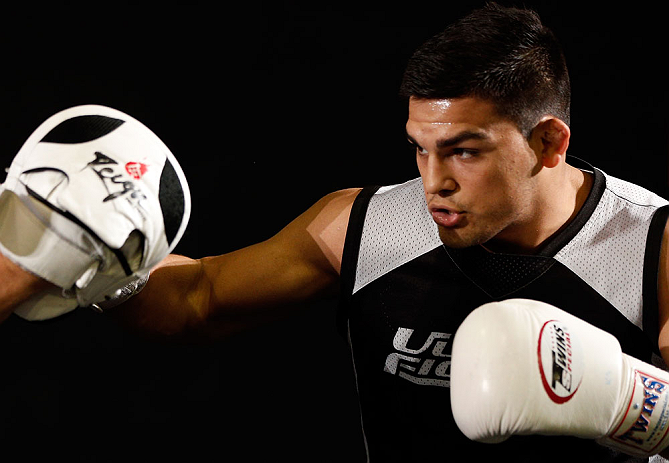 So says a popular Mexican ranchera song by Vicente Fernandez, called El Palenque. It’s the walkout song chosen by Kelvin Gastelum for this Saturday, April 13, when he battles Uriah Hall for three rounds or less to decide who will become the new Ultimate Fighter.

Kelvin was the youngest of the 14 fighters to enter the house under the command of coaches Jon Jones and Chael Sonnen, and the last pick of coach Sonnen, as 12 fighters were chosen before him for both Sonnen and the champion Jon Jones.

His rival Hall was the second pick of Sonnen, and a heavy favorite after devastating performances in all of his fights, including the spinning hook kick knockout over Adam Cella, which was one of the most spectacular knockouts in TUF history. And then after his knockouts over Bubba McDaniel and Dylan Andrews, you could say he is a safe bet.

Does this matter to Kelvin? Not at all. With only five professional fights heading into the show, you might think the Mexican-American would have the disadvantage due to a lack of experience. However, he made it all the way to the final in one of the most competitive and difficult seasons in the history of TUF, beating McDaniel and Josh Samman by submission, and Collin Hart by KO.

"It was a good experience, obviously. I had confidence in myself, I knew I could achieve what few thought, and I knew I had the talent to do what I did," says the 21-year-old. "I lived a year in Ciudad Obregon. My grandfather and grandmother are from there, my mother then came to the U.S. and I have always spoken Spanish with her. I was born in San Jose, California and raised there until I was eight, and since then I have lived in Yuma.”

Hall is 8-2 in his career (his only two losses are against top 10 UFC middleweight fighters Costa Philippou and Chris Weidman), and that fact and what he did in his three TUF fights could be intimidating. But not to Kelvin, who believes he can be the one who defeats Hall.

"Uriah is a great talent and he poses many problems, but I think I can beat him in any area; in boxing, wrestling, jiu-jitsu. I have no strategy, he will attempt to drop his kicks and do what he can do, but I do not think he wants to go down to the mat with me and that's where the key will be and where I will be able to win."

All Kelvin’s opponents were favorites over him, and it was rumored in the TUF house that Kelvin was the fight everyone wanted because they thought he was the safe fight. No doubt they all think differently today. The setting is ideal for Kelvin, who has nothing to lose, no matter who the opponent is.

Coach Chael Sonnen did not hide his surprise with Kelvin, saying he was a regular fighter that improved "and now could win this," to Ronda Rousey when the champion visited the TUF gym to train with Kelvin, a big fan of hers.

"Sonnen is great coach, I remember he told me that it doesn’t matter if you're fighting in front of thousands of people or in front of 300, it’s the same and I must focus just the same as in practice, and that state of mind is one of the things I learned. My mind is my greatest strength. I lock myself in my head and tell myself I'm invincible and nobody can beat me, and so I go out and fight."

Despite having his own fight upon him, Kelvin also takes the time to talk about his coach and how the outcome of UFC 159 main event between champion Jon Jones and Chael Sonnen will be.

"Jones represents many problems, but I think he has not fought someone like Chael. Chael will always come forward, pushing forward, forward, and Chael’s wrestling is on another level, so I think he’s going to win."

You wouldn’t expect anything less from an underdog but to support his own underdog coach against one of the most dominant champions we’ve ever seen.

But two things are clear after talking to this young talent: one, he has a great and promising future. His first fight was at 17 and a few years later he is about to start to write his history, so get used to his song, because it appears El Palenque will play regularly in the Octagon. And two, he does not care what anyone says about him, he comes to fight, to win, when he enters the Octagon, ladies and gentlemen, this rooster will not crack.