"I feel like people have labeled me as a prospect in the welterweight division and after this win I think I’m gonna shed that label and put on a different one as a rising contender." - Kelvin Gastelum 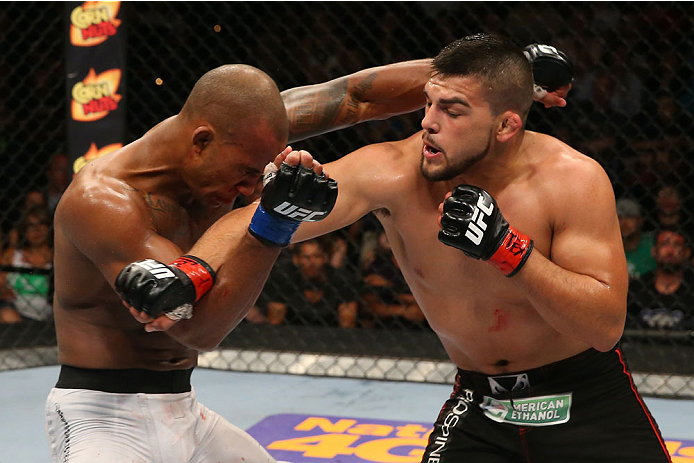 Kelvin Gastelum laughs when you ask him about the crowds in Mexico he fought in front of in 2010-11, when he was competing in the first two fights of his pro MMA career. He knows he can’t compare fighting in the Rancho Grande or El Nido Sports Center in Mexicali to being the UFC 180 co-main event in the sold out Mexico City Arena this Saturday, but oh, it was quite the experience back then.

“The crowds were wild,” he said. “I remember fighting in Mexico and people were throwing stuff at the ring and shouting and screaming and going crazy. It’s really a different crowd, but most people are used to it. It’s pretty chaotic though and unlike anything I experienced in any other place. Fighting in Mexico was very different, but I liked it. The people really have my back and support me one hundred percent and I’m so happy to be fighting in front of my Mexican fans again.”

Facing Jake Ellenberger this Saturday, Gastelum has a lot on his plate heading into the fight. “The Juggernaut” is clearly his toughest test to date since winning season 17 of The Ultimate Fighter, he’s had to field endless questions about his weight after coming in nearly two pounds over for his last bout against Nico Musoke in June (for the record, he says he’s on track for a successful trip to the scales on Friday), and he’s fighting in Mexico, which is one of those moments a fighter dreams about. And on this day, being on the UFC’s first show in the fight-rich nation is the most important thing on his mind.

“It’s a huge deal,” he said. “First of all, it’s the first event in Mexico that the UFC is gonna have and it’s a pretty important event. Just that in itself is pretty amazing and I’m super excited, but on top of that I’ll be fighting in front of a lot of my fans, and I’m Mexican, so I’m so excited to be fighting in front of the people that support me and root for me. The situation can’t get any better for me.”

Speaking of the UFC 180 situation, he may be right in terms of having the pro-Mexican spotlight all to himself after injuries to heavyweight champion Cain Velasquez and popular lightweight Diego Sanchez forced them off the card. And hey, Gastelum has been called Mini-Cain before, so maybe this week he’ll have to be Full-Cain.

“I don’t know if I’m going to be the only Mexican on the Pay-Per-View, but I’m gonna have to represent,” Gastelum said. Mexico natives Augusto “Dodger” Montano and Edgar Garcia will be on the main card with the Yuma, Arizona product, but you can expect that Gastelum may get the biggest roars, considering the importance of the bout, something not lost on him in the slightest.

“I feel like people have labeled me as a prospect in the welterweight division and after this win I think I’m gonna shed that label and put on a different one as a rising contender,” he said. “This is the one that puts me on the map in the top ten, and hopefully I’ll make a run for that title in 2015.”

It’s been a whirlwind for Gastelum thus far. Remove his battles with the scale from the equation and he’s been unstoppable since running through the TUF 17 field and winning the title by upsetting Uriah Hall in April of 2013. Wins over Brian Melancon, Rick Story and Musoke followed for the 23-year-old, and all the while he’s kept it together as he’s gone from shy kid to a young man thrust into the media spotlight without a safety net.

“Even now I’m in awe at what’s happened in these short two years,” Gastelum said. “I’ve accomplished so much and sometimes I just sit back and I’m just like ‘wow.’ I really don’t have any words for it, but I’ve always had my head on pretty straight and kept my eyes looking forward to the future all the time. In these two years I’ve grown so much, not only as a fighter, but as a person as well.”

So how does Gastelum do it?

He laughs again, and a relaxed fighter is a dangerous fighter, something Gastelum plans on showing Ellenberger on Saturday.