Kelvin Gastelum's tug of war between welterweight and middleweight has finally been decided as he fights for the 185-pound interim belt at UFC 236.
By Thomas Gerbasi • Apr. 3, 2019

After winning The Ultimate Fighter at middleweight in 2013, Kelvin Gastelum was convinced that his best shot at taking UFC gold would be in the 170-pound welterweight division. And while Gastelum had success in the weight class, he also had struggles with the scale, prompting periodic moves back up to 185.

Well, middleweight has apparently won this tug of war, as Gastelum will challenge Israel Adesanya for the interim 185-pound crown in the co-main event of UFC 236 on April 13, six years to the day from his Octagon debut. Clearly, there are no questions now about Gastelum’s run as a middleweight, and for proof, check out five of his best performances in the division below… 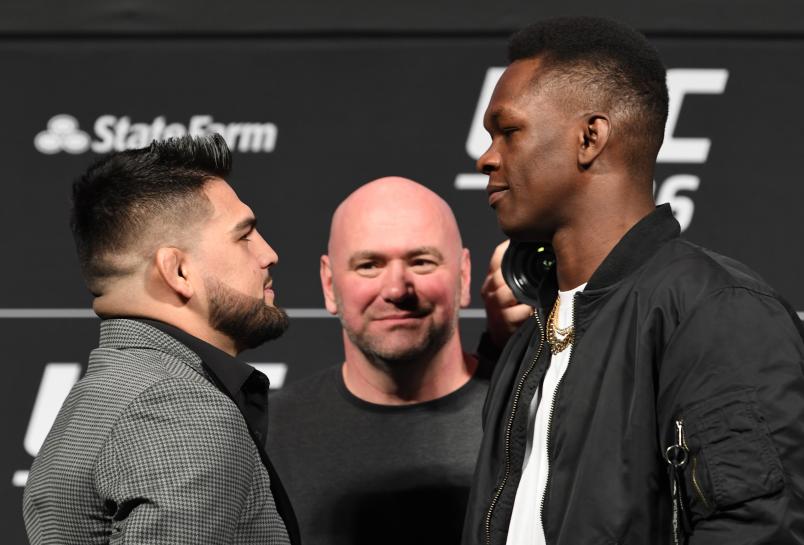 Built like a Mack truck instead of the Little Engine That Could, The Ultimate Fighter season 17 finalist Kelvin Gastelum nonetheless snuck up on people on his way to the finals in Las Vegas on April 13, 2013, beating four consecutive opponents on the reality show despite having only five previous pro fights.

Defeating Kito Andrews, Bubba McDaniel, Collin Hart and Josh Samman on the show should have been enough warning that Gastelum was a serious threat, but he was still an underdog when he was tasked to face dynamic knockout artist Uriah Hall. Those oddsmakers were fooled once again by the Arizonan, who pounded out a three-round decision win over “Prime Time” to win the TUF 17 crown. Kelvin Gastelum wouldn’t be overlooked anymore.

Gastelum’s pressure and hard combinations kept Marquardt on the defensive in the early going, reddening the veteran’s face in the process. Marquardt began to catch a bit of a rhythm midway through the round, but a takedown by Gastelum and some hard flurries by the Arizonan just before the horn wrapped up the round for the former Ultimate Fighter winner.

Maintaining the momentum he had throughout round one, Gastelum landed almost at will in the second on the game, but outmatched, Marquardt, who simply had no answers for the 23-year-old. As the round ended and Marquardt sat on the stool in his corner, he told his coach Trevor Wittman that he had nothing left, and upon hearing that, Wittman immediately called the bout.

After being pulled from a UFC 205 fight against Donald Cerrone after missing weight, Kelvin Gastelum gained a measure of redemption at middleweight with an impressive third-round stoppage of Tim Kennedy.

Kennedy got off to a great start, putting Gastelum on the deck twice in the opening two minutes, and even when Gastelum got to his feet, Kennedy kept him locked up while firing off knees to the leg. Gastelum finally got loose with 90 seconds left and landed a couple good shots, raising a mouse under Kennedy’s right eye before a late blitz that had Kennedy on the defensive.

Looking to lock Gastelum up, Kennedy attempted to grapple with his foe, but instead, it was Gastelum who took control as the bout went to the mat. Kennedy was able to reverse position, but Gastelum punched his way free and had success standing, with that success only growing as the round progressed.

As Kennedy continued to slow down, Gastelum pushed the pace in search of the finish in round three, mixing in punches and kicks to the head and body. Midway through the round, a right-left to the head dropped Kennedy, and as he covered up, referee John McCarthy had seen enough, stepping in at the 2:45 mark of round three.

Former UFC middleweight champion Michael Bisping rolled the dice by taking a fight with rising star Kelvin Gastelum just three weeks after losing his belt to Georges St-Pierre at UFC 217. And while it was a gutsy move by the Brit, it was Gastelum who left the Mercedes Benz Arena in Shanghai with the win, as he halted Bisping in the first round of their UFC Fight Night main event.

“This is the biggest win of my career,” Gastelum said. “I have a huge amount of respect for Bisping for stepping up and I’m thankful.”

Gastelum started fast, but as the round progressed, Bisping appeared to be getting into his rhythm. Yet as “The Count” got more comfortable, he got a little greedy and missed with a long right hand. Gastelum didn’t hesitate to counter, with a right hand followed by a thudding left that put Bisping on the deck. The follow-up shots were mere window dressing, as referee Marc Goddard stepped in to stop the fight at the 2:30 mark.

“That’s something we trained a lot,” Gastelum said of the final combination.

“I was enjoying myself,” a gracious Bisping said. “He caught me with a good shot; I’ve been doing this for a long time, I’m getting old.”

Kelvin Gastelum survived the ground game of fellow middleweight contender Ronaldo “Jacare” Souza in the first round of their UFC 224 co-main event to come back in the next two frames and win a close split decision at Jeunesse Arena in Rio de Janeiro.

Souza was intent on getting the fight to the mat, and while Gastelum was able to resist for a while, with a little over three minutes to go, he was put on the deck by the Brazilian. Souza was able to secure the mount position, and with a little over a minute left, he went for Gastelum’s arm. The Arizonan defended well, escaping just before the end of the frame.

Gastelum came out fast for round two and began tagging Souza, who was soon bloodied by the incoming blows. Then “Jacare” was dropped by a left hand just past the midway point of the frame, and while Gastelum wasn’t able to finish, Souza was slow to get back to his feet. The Brazilian wasn’t done yet, though, and he kept throwing and landing power shots that were answered by Gastelum as a thrilling round came to a close.

Gastelum was clearly the fresher fighter in round three, but Souza still found a way to dig deep and land hard shots, thrilling the fans in attendance as the two went blow for blow down the stretch.