Kelvin Gastelum: From Last to First 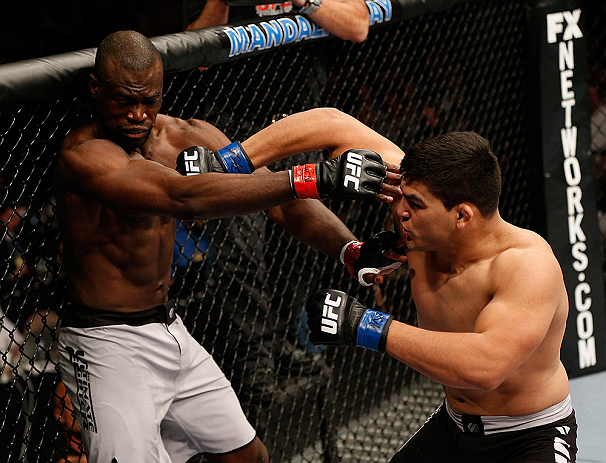 Last to first, final pick to finale winner, Kelvin Gastelum has had an outstanding year, and it’s far from over. The newly minted The Ultimate Fighter season 17 tournament champion is singing a Frank Sinatra classic “The Best Is Yet To Come” as he prepares to join the UFC’s welterweight ranks against Brian Melancon on August 28th at UFC Fight Night: Condit vs. Kampmann.

Yet before Gastelum drops 15 pounds, let’s take a victory lap and reminisce about arguably the most impressive run in the reality TV show’s existence.

“It was way beyond my expectations,” tells Gastelum. “I didn't really focus on winning the whole thing. I focused on just winning one fight at a time. I didn't go in there and say I'm winning this whole thing. I went in there to take it one fight at a time. I really enjoyed the ride. I had a great group of guys that I was hanging out with. I think everybody got along pretty well. From my experience, I got along with pretty much everybody in the house, so I had a great time filming, just in general.”

Born in San Jose, California and raised in Yuma, Arizona, the 21-year-old Gastelum was the youngest cast member and, obviously, winner in TUF history. Standing at 5-9 and fighting at middleweight, Gastelum took a unanimous decision over Kito Andrews to get in the house to only receive the unceremonious title of being last picked by Chael Sonnen’s Team “Darkside.” From there, Gastelum tore through the competition as part overachieving underdog and part recipient of UFC women’s bantamweight champion Ronda Rousey’s Midas touch in the form of a “go get ‘em, kid” phone call prior to his first fight in the house. > Watch: Kelvin discusses his TUF journey

“I don't know who told them, but somebody told them I was a fan of hers,” remembers Gastelum. “And Chael called her up for motivation, I guess. I tried to play it off cool. They were giving me a hard time at the house. I tried to play it off cool, but inside I was screaming like a little girl, 'Ahhhh! Ronda!' Even before I made it all the way to the finale, she signed a hat for me and it said, ‘good luck in the finale, you're going to make it to the finale,’ which was pretty cool for her to do.”

Pretty cool and prophetic as Gastelum choked out UFC light heavyweight champion Jon Jones’ training partner Bubba McDaniel, knocked out Collin Hart in 33 seconds, and secured a Submission of the Season rear naked choke on Team Jones’ top prospect Josh Samman in the first round en route to that finale in April. Meanwhile, Gastelum’s teammate Uriah Hall earned three highlight reel KO victories, which had easily made the Jamaican-born standup fighter an instant star. With Hall’s hype train running at full speed, Gastelum approached his role as its derailer in the same pragmatic mindset as he had entering the house. 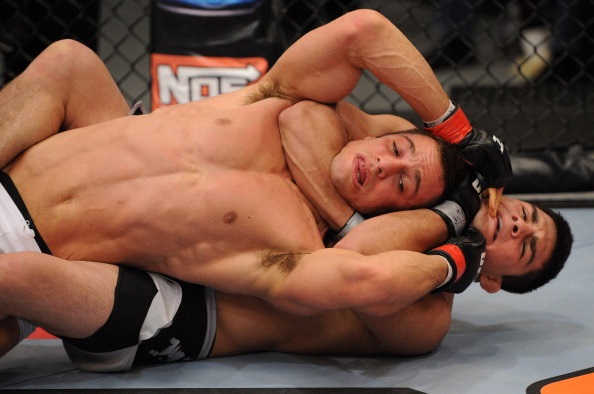 “I didn't really worry about winning and just did what I had to do and let the outcome handle itself,” states Gastelum. “I was real confident coming into that fight. I just went in there with an attitude that I've got nothing to lose. I didn't really worry about the outcome. I just went in there and performed. I just let the outcome handle itself. I trained for a 15 minute war and that's exactly what it was. I expected the fight to be an all out war, which it was.”

After 15 minutes of back and forth, up and down action, Gastelum was the winner by split decision. The victory over Hall was Gastelum’s first pro bout to go the distance and improved his overall record to an undefeated 7-0 including six stoppages (3 KO, 3 sub). This brings the story back to the beginning, and what’s next for the recently crowned TUF middleweight champ and friend of “Rowdy” Rousey. A welterweight debut inside the Octagon, of course.

“My heart is racing right now just thinking about it,” laughs Gastelum. “I think I'm more excited for this fight than the finale. This is the most excited I've ever been for anything. I'm super excited to be fighting in the UFC. I can't even tell you how I excited I am. I feel like I'm going to show the world who I really am and they're going to be surprised - everyone is going to be surprised.”

The anticipated unveiling of the 170-pound Gastelum will see him meet the heavy-handed Melancon on August 28th in Indianapolis. At 7-2, the Houston native showed no signs of “jitters” or ring rust as he shook off nearly two years of in-cage inactivity and KOed TUF alum Seth Baczynski at UFC 162. Originally, Gastelum was scheduled to battle Brazilian veteran Paulo Thiago, but Thiago pulled out due to an injury and Melancon is more than ready to get back to battling on a regular basis. Hence, this is a showdown between two powerful fighters with a win apiece in the UFC who will lay it all on the line in hopes of starting a streak inside the Octagon.

In preparation for Melancon, an unexpected change of scenery has taken place from the peaceful deserts of Arizona’s Yuma County to the calm waters of California’s Pacific Ocean. “He invited me to come over and I never left (laughs),” says Gastelum with the “he” in question being TUF teammate/runner-up Hall and the gym in question is Mark Munoz’s Reign Training Center. The Orange County super-gym has quickly become a haven for top UFC talent like Jake Ellenberger, with internationally famed coaches like Rafael Cordeiro. It’s a perfect environment for Gastelum to sharpen his skills against some of the best in the MMA community to get ready for his hopefully long and fruitful UFC career to come.

“I'm only getting better,” asserts Gastelum. “I feel like I'm elevating as a fighter and as an athlete. I have a great mentality going into this fight. I feel great mentally and physically. You're going to see a better version of what you saw on the show and on the finale. I don't think I've been able to show 100% of my skills. I feel like you've only seen a portion of them. To me, I think it's because of nerves. I'm getting more comfortable in front of a big crowd. I'm just a really competitive person and I always think that my last performance is never good enough. I always want to be better than my last fight. I want to be the best that I can be and I think you're going to see the best performance you've ever seen from me.”

On August 28th, warring welterweights will collide as Gastelum takes on Melancon. “I think I'm one of the young prospects in the UFC and one day I hope to be a champion,” states Gastelum, who looks to capitalize on an already accomplishment-filled year by proving he’s got plenty in store for fight fans for years to come. “Fans are going to be able to see me grow as a fighter and as a person in the cage. They're going to be able to see me develop throughout the years until I become that world-class fighter.”