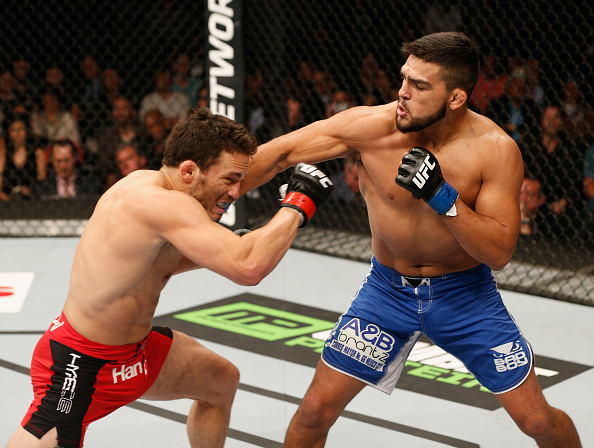 It’s been a chaotic ride for Kelvin Gastelum, but one he’s making sure he takes the time to enjoy.

The Arizona native came to Season 17 of The Ultimate Fighter as a 21-year-old hopeful with only a handful of professional fights under his belt, and he saw the reality show as his way to gain entry onto the biggest stage in MMA. Granted, the Yuma native had found victory in all five of those fights, but with a collection of experienced fighters and several highly-touted prospects also in the tournament, there wasn’t a ton of expectations put on Gastelum winning the six-figure contract at the season’s end.

Even though he scrapped his way into a showdown with Uriah Hall in the TUF 17 finals, the New Yorker’s previous wins had been so flashy and sharp, that calling Gastelum a long shot to win the bout seemed generous. He walked into his tilt with “Prime Time” intent on proving his doubters wrong, and it was a mission he accomplished when the judges’ scorecards were announced and a split decision made him that season’s “Ultimate Fighter.”

Winning TUF is certainly a highlight in a fighter’s career, but Gastelum refused to let it become the highpoint, as he continued to build momentum with every showing inside the Octagon.

He’s found victory in all four of his bouts since the show and steadily climbed the welterweight divisional ladder in the process. Every fight under the UFC banner has come against tougher competition than his previous showing, and Gastelum has answered each challenge in more impressive fashion than the one before.

The 23-year-old welterweight is growing and evolving out in the open for fight fans to see, and his progress has been exceptional in the short time he’s competed inside the Octagon. Yet, while the process has been unique a unique experience and has presented a variety of challenges, Gastelum has enjoyed every step he’s taken.

“I feel great and there really isn’t much I can complain about,” Gastelum said. “I’m just handling my business and I’m in a really good place mentally and physically. I’m trying to reach one goal and I’m keeping my focus on that goal. Obviously I take it one fight at a time, but I’m just enjoying the ride, man.

The next obstacle in his path will be the biggest yet by several measurable standards. The undefeated prospect turned contender will face Tyron Woodley at UFC 183 on January 31 in a fight that could alter the course of Gastelum’s trajectory in the welterweight divisional picture.

In the lead-up to the bout, UFC President Dana White has suggested Gastelum could land a title shot with a victory, which would leapfrog the hard-charging scrapper ahead of a talented pack of contenders in waiting.

While White’s words served to shine some light on where Gastelum stood in the bigger picture at 170, and he certainly found them to be inspiring, they are nothing more than words at this point. Gastelum knows he has a stern test on his hands in the former University of Missouri standout, and once he’s put “The Chosen One” in his rear-view mirror, then he will take a look at the welterweight landscape ahead of him.

“Woodley is very strong and explosive, but he has too much of a muscle build up. Lactic acid build up happens to him because of all that muscle mass. I think I match up very well with him, and believe in my own right that I’m just as strong and explosive as he is. People are going to see it in this fight. I’ve been working on my quickness and my explosiveness and I think it’s going to be a great fight.”

The welterweight division is currently more competitive than it has been in years, and there is no room for error in the elite tier of the 170-pound fold. Both Gastelum and Woodley are both aiming at future championship opportunities, and their upcoming tilt at UFC 183 will prove to be a crucial juncture for one of them as the winner will remain in the hunt for UFC gold and the other will get bumped to the back of a line that is stacked with would-be contenders.

Gastelum fully believes he will be the one moving ahead and feels his particular style is a bad matchup for his opponent. The American Top Team representative prefers to be the one applying the pressure and has historically not responded well when he’s on the other side of the coin. Gastelum is a fighter who comes forward from the opening bell and doesn’t stop until the final bell sounds or the referee steps in to wave off the fight.

He believes that’s going to create some major problems where Woodley is concerned and will be his key to claiming victory on Saturday night.