Kelly not bothered by 'dad bod,' focus on Evans 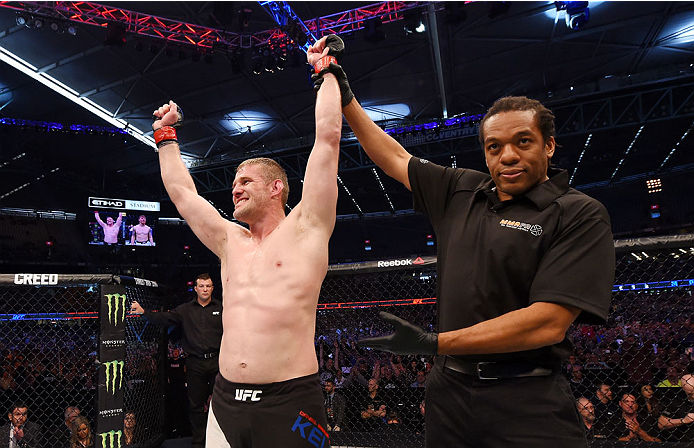 Daniel Kelly, who fights Rashad Evans this Saturday at UFC 209: Woodley vs. Thompson 2, is used to being the odd one out in his sport of choice.

First, it was in his judo career, which spanned four Olympic Games from 2000 to 2012. Back then, Kelly was underestimated because of his native Australia’s practically non-existent reputation in judo.

“Yeah absolutely (I was underestimated). Australian judo, in some circles, can be likened to the Jamaican bobsled team,” Kelly said ahead of his fight at the T-Mobile Arena in Las Vegas. “It’s nothing new to me to be the underdog, and I’ll be the underdog again when I fight Rashad.”

Kelly came far closer to a medal than any Jamaican bobsled team has though, placing as high as seventh in the 2004 Athens Olympics.

And while Kelly may wonder if he would have achieved a podium finish if he hailed from a judo stronghold, he doesn’t have a chip on his shoulder about his Olympic career.

“It would’ve been great to win a medal, I was close a couple of times, but I’ve got no regrets. I did as well as I could considering where I was from and the resources I had. It’s all well and good to speculate if I had been able to go here or there,” Kelly said. “But, at the end of the day, it’s not bittersweet. I retired from judo competition because I wasn’t going to be competitive at the highest level anymore; my body probably wouldn’t have allowed me to. Of course I wish I would’ve won a medal, but I did as well as I could and that’s life.”

To quote 1993’s Cool Runnings, the most famous movie on Jamaican Bobsledding: “A gold medal is a wonderful thing; but if you’re not enough without it, you’ll never be enough with it.”

But in Kelly’s MMA career, he doesn’t stick out because he’s Australian. This time around, he’s a victim of ageism.

The 39-year-old Kelly, who has a softer physique than many UFC fighters, is the proud owner of what some observers have called a “Dad Bod”.

“I don’t really care, it’s not as derogatory as some things people have said online so I couldn’t care less. Yeah, I’m not chiseled and ripped, but it doesn’t bother me at all.” --Daniel Kelly on his 'Dad Bod'

That’s a label the father of two is content to live with.

“I don’t really have a choice do I,” he laughs. “I don’t really care, it’s not as derogatory as some things people have said online so I couldn’t care less. Yeah, I’m not chiseled and ripped, but it doesn’t bother me at all.”

Kelly is equally at peace with the fact his fighting style is not the prettiest in the UFC. From his comeback third-round TKO victory over Antonio Carlos Junior, to his hard-fought decision victory over veteran Chris Camozzi, Kelly is at his best in deep waters. And he doesn’t mind getting a little bloody on the way there.

Against Evans, Kelly believes he will h ave to dig deep once more to overcome his opponent’s speed advantage.

“Obviously, it’s a judo vs. wrestling kind of thing. His wrestling’s very good, I’m hoping that my judo will nullify that. He’s very fast and explosive, but he may tire later in the fight and I think that’s where I’ll come into my own.”

Kelly has been one of the unlikely success stories of 2014’s The Ultimate Fighter Nations: Canada vs. Australia. Kelly was eliminated in the first round, losing by arm triangle choke in just 56 seconds to Sheldon Westcott.

Fans of the season will remember the raw emotion in Kelly’s distraught post-fight interview. A cynical viewer might have thought Kelly’s UFC hopes had been dashed. After all, The Ultimate Fighter has ended more UFC dreams than it’s fulfilled.

But the Australian has since amassed five UFC wins against increasingly tough opposition, losing just once to Sam Alvey in May of 2015.

When asked if he considered giving up on his UFC ambitions after his time on the show, Kelly answers firmly in the negative.

“No, that was an opportunity missed in the house, but it probably still fast tracked my chance to get into the UFC being on that show,” Kelly said. “As long as my body holds up and I’m competitive and I can fight at the top level, I’ll keep going.”

Against former UFC light heavyweight champion Evans, Kelly has the opportunity to prove he’s not just one of MMA’s recent feel good stories, but a fighter on the verge of the middleweight division’s top ten.

Kelly admits he’s been a fan of his opponent since Evans won The Ultimate Fighter 2 in 2005.

“I absolutely remember him from winning Season 2, and I used to love watching The Ultimate Fighter, that was before you could watch it on the internet,” Kelly said. “I actually bought the season on DVD, and I never thought I’d get the opportunity but it’s a great opportunity and I’m really looking forward to it.”

Come Saturday, UFC fans will likely be more focused on Evans, who is making his middleweight debut. After two straight losses, “Suga” is looking to prove the move down to the 185-pound division is the adjustment he needs to once again be a title contender.

All eyes may be on Evans come Saturday, but that will come with more pressure too.

That’s of course the advantage of being a Jamaican bobsled team member, or an Australian Judoka, or the fighter with a “Dad Bod”.

“Yeah, absolutely (the pressure will be on Evans). He’s a former champion, it’s his first weight cut down, nobody really knows who I am, so yeah, there’ll be more pressure on him than there is on me.”