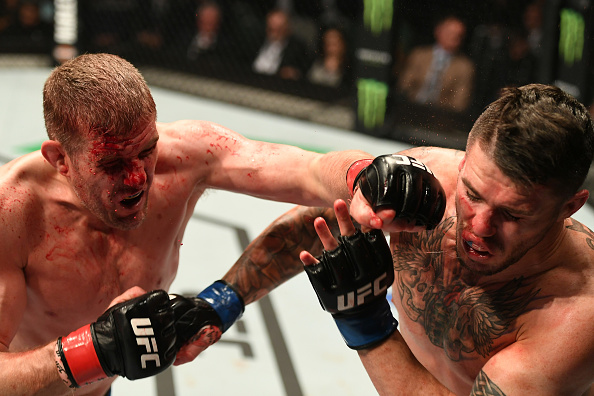 It was quite an interesting first round, with Camozzi looking like he was going to run away with the fight thanks to the effectiveness of his stick and move strategy. Kelly kept moving forward though, and soon his overhand left began finding a home. A left elbow to the head from Camozzi opened up a cut on Kelly’s forehead in response, but it was Kelly getting a late takedown to keep it interesting.

Kelly got a takedown in the opening minute of the second round, and he proceeded to keep Camozzi there for the rest of the frame, evening matters on the scorecards.

In the third, Camozzi avoided the takedown for much of the round, but with under two minutes left, Kelly got the Coloradan to the mat, with a late barrage of strikes perhaps being the deciding factor in his decision win, which lifts his record to 12-1. Camozzi falls to 24-12.

After a rough first round, Australian lightweight Damien Brown came alive in the final two frames to pound out a decision victory over Jon Tuck.

Tuck shot for a takedown in the opening moments of the fight, and after getting out of a guillotine choke, he went to work with ground strikes. With a little under two minutes left, Brown found daylight and got to his feet, and his strikes began to find their mark until a right hand from Tuck cut Brown and put him on the mat. Tuck took Brown’s back, but ran out of time to finish.

In the next two rounds though, Brown paid little attention to the cut spraying crimson down his face, and he simply outworked Tuck, allowing him to eke out the razor-thin split decision by scores of 29-28 twice and 28-29. 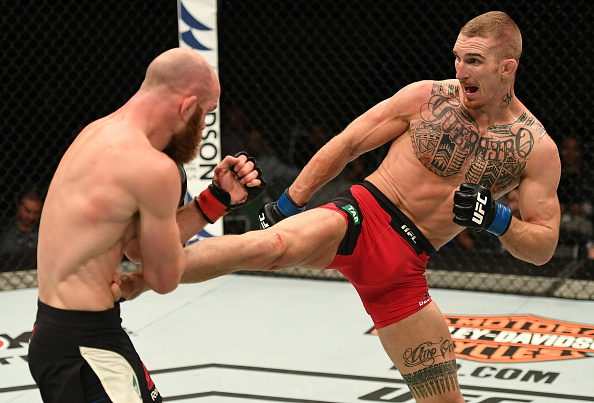 The first round was closely contested until the final minute, when Meunier scored with a flush spinning backfist and followed it up with a takedown in the closing seconds.

Round two was almost a carbon copy of the first, with Meunier and Walsh fighting on fairly even terms until a late surge from the Canadian allowed him to steal the frame.

Walsh got a quick takedown to open the third, and when Meunier rose, the Aussie kept him locked up against the fence. Near the midway point of the round, Walsh nearly caught his opponent’s neck, but Meunier easily eluded danger and scrambled to his feet. Walsh did land a hard right hand that momentarily wobbled Meunier, and he scored another takedown in the final minute, but it wasn’t enough for the crowd favorite to turn the fight around.

Flyweight contender Ben Nguyen impressed in his adopted home country of Australia, winning a clear-cut three round unanimous decision in his bout against Geane Herrera.

Herrera came racing out of his corner with a side kick that produced a flash knockdown, and he followed up with a crowd-pleasing throw. Nguyen recovered quickly from the blitz, getting his own knockdown with a little less than three minutes to go. Once the two settled into the fight, the action didn’t let up, with Herrera getting in some shots, but the bulk of the scoring being done by Nguyen.

Nguyen continued to pepper Herrera with accurate shots throughout round two, with Herrera’s best moment coming in the final seconds when he scored a takedown. The third was not much better for Herrera, who couldn’t figure out the offensive assault of the No. 15-ranked Nguyen, who improved to 16-6 with the victory. Herrera falls to 9-3. 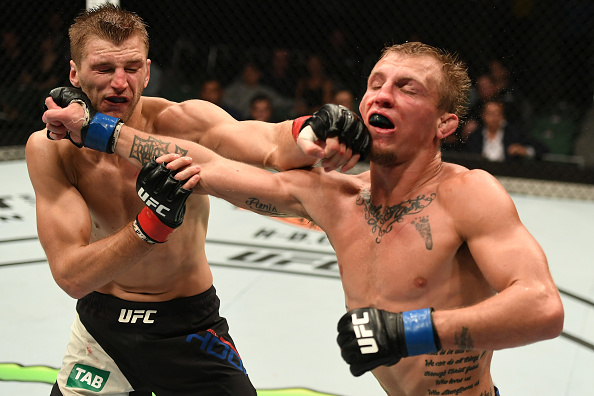 Knight (18-2) was on target with his right hand early on, with the second one he landed scoring a flash knockdown. Hooker recovered quickly and began landing with a stiff straight left, bloodying Knight in the process. With two minutes left, Knight changed the location of the fight with a takedown, and while Hooker scrambled out of trouble, he was grounded once more moments later.
RELATED: Watch Knight's Post-fight Octagon Interview

Knight went back to work on the mat in round two, nearly sinking in a rear naked choke on two occasions, but Hooker was cool under pressure and he waited out the finishing attempts, even if he did lose the round on the scorecards.

Hooker (14-7) began the final round with a head kick, but Knight walked right through it, not content to let the Auckland native steal the momentum back. As the round progressed though, Hooker began landing more and more shots and Knight appeared to be tiring, making it a pitched battle down the stretch, one taken by Knight by scores of 30-27, 30-26 and 29-28.

Ecuador’s Marlon Vera engaged in a back and forth featherweight battle with China’s Ning Guangyou before emerging with a close, but unanimous, three-round decision win.

Vera had a good opening round, scoring with kicks to the head and body before nearly locking in a rear naked choke late in the frame.

Guangyou’s kicks to the leg began putting Vera on the defensive in round two, and the Beijing product only got more confident as he marched forward, leading Vera to grapple and take the bout to the mat. Guangyou wasn’t deterred, and he kept the pace high as he worked into side control and then Vera’s guard. Vera sought a submission from his back, but Guangyou’s pressure allowed him to take the round.

The former TUF China winner continued to pile up the points early in round three, but out of nowhere, Vera landed a flush shot and put Guangyou on the canvas. It looked like Vera was going to end the bout right then and there, but Guangyou recovered and made it back to his feet, leading to some good exchanges down the stretch that were mainly won by Vera.

Manila’s Lausa was patient but potent in the first round, seemingly on target and deadly with every punch he threw. Zhikui, despite being in trouble on a few occasions, was game and willing to throw with his opponent, even if that didn’t appear to be the best course of action.

“The Demolition Man” switched things up from his fists to his feet in round two, with a flush kick to the head dropping Zhikui hard to the mat. Lausa pounced in search of a finish that included a guillotine choke attempt, but Zhikui fought his way out of danger, and by the end of the round he had fought his way back into the bout.

Lausa regained control in the third though, as he continued to rock the undaunted but outgunned Zhikui, who was outpointed by identical scores of 30-27.