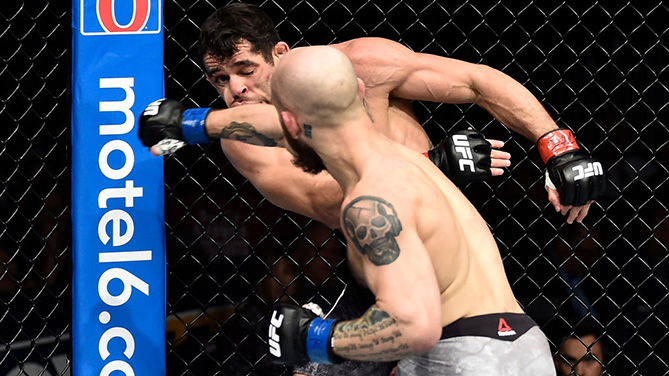 Rising bantamweight star Brian Kelleher came up big in the most pivotal bout of his career, as he won an exciting three-round unanimous decision over former world champion Renan Barao in UFC Fight Night prelim action at Amway Center in Orlando.

Barao got off to a fast start, mixing up his striking game nicely as Kelleher marched forward, but as the round progressed, the New Yorker began getting closer with his own strikes, eventually rocking Barao with a right hand with a little over a minute left.

Kelleher continued to press in the second and third, taking advantage of Barao’s often porous defense, and while the Brazilian stayed in the fight and kept throwing, Kelleher’s pressure was the prevailing theme in the fight, and in the closing 90 seconds, “Boom” had Barao hurt on a few occasions as the two slugged it out to the final horn.

Bantamweight contender Marion Reneau bounced back from a rough first round against Sara McMann to score a second-round submission victory over the Olympic silver medalist.

A minute into the fight, McMann followed up a right hand with a thudding takedown and she moved into side control, locking in a crucifix that allowed her to land several unanswered shots on the trapped Reneau, who was unable to escape before the end of the round.

Reneau did score a flash knockdown with a right hand in the second minute of round two, and after stuffing two takedown attempts by McMann, the tide had momentarily turned. But the third attempt by McMann landed, and the fight went to the mat. Yet while on her back, Reneau sunk in a triangle choke, and the tap out soon followed at the 3:40 mark, with the Californian completing her comeback by picking up the biggest win of her pro career.

In a clash of strawweight strikers, Angela Hill won a three-round unanimous decision over the No. 14-ranked Maryna Moroz.

Hill (8-4) and (8-3) Moroz went on the attack at the start and kept the pace high throughout the first five minutes. And while both threw plenty of punches and kicks, Hill’s shots had more power behind them.

The pattern established in the first round carried into the second, but just before the midway point, a Moroz takedown attempt ended with Hill in the top position, and “Overkill” used that advantage well, landing some hard strikes before putting the fight back on the feet, where the two continued to trade.

Moroz remained busy in the third, but she was missing most of her strikes, while Hill continued to land the more telling blows, with the judges rewarding her work with three identical scores of 30-27.

Despite both fighters being students of Eddie Bravo’s 10th Planet Jiu-Jitsu system, Saunders and Jouban kept it standing in the opening round. Saunders got off to a fast start as he stalked Jouban, but midway through the round, Jouban stormed back, with his inside leg kicks opening the door for hard strikes upstairs, and the Louisiana native kept the heat on in the second, marking Saunders up with punches and elbows. Saunders refused to give ground, but with his legs weakened by the kicks, his defense was compromised as well, and Jouban didn’t stop throwing, with a single left hand to the jaw ending the fight immediately. The official time of referee Andrew Glenn’s stoppage was 2:38 of round two.

After going the distance in his last five fights, Sam Alvey brought the heat back in his UFC light heavyweight debut, knocking out Octagon newcomer Marcin Prachnio in the first round.

More aggressive than he has been in recent bouts, Alvey (32-10, 1 NC) was working throughout the fight, and when Prachnio (13-3) and the Californian traded right hands late in the opening frame, Alvey’s landed first, dropping the Warsaw native. Prachnio rose and marched forward, but in doing so, he left himself open for another right hand, and as he hit the deck a second time, referee Dan Miragliotta stepped in, stopping the fight at the 4:23 mark.

Brazilian Jiu-Jitsu ace Rani Yahya put on a ground clinic once again, submitting Hawaii’s Russell Doane in the third round of an emotional bantamweight bout that came less than two weeks after his mother passed away.

Yahya got the takedown within seconds of the bout’s start, putting the fight immediately in his world. Yahya proceeded to lock up Doane’s arms and neck, but the Hawaiian stayed cool and the Brazilian eventually gave up the hold. A subsequent knee to the spine by Yahya drew a hard warning from referee Kevin MacDonald and a restart, but Doane wasn’t able to use the new standup to his benefit before round’s end.

A wild shot by Yahya in the first minute of round two put the bout on the mat again, and he quickly took his foe’s back but wasn’t able to finish over the next four-plus minutes.

The third opened with another Yahya takedown attempt, and while Doane scrambled his way into the top position, that advantage didn’t last long, as Yahya reversed, got on top and then sunk in the head and arm choke that produced a tap out at 2:32 of round three.

Flyweight prospect Alex Perez made it two straight in the UFC with a shutout three-round decision win over Eric Shelton.

Evenly matched on paper, both fighters were just as competitive on paper, with Shelton and Perez both having their moments in a close first round. Perez’ work on the mat may have earned him the frame, though, and it was the same story in the second and third, as he diluted Shelton’s bursts of striking by grounding the Iowan and controlling the bout on the mat.

Highly-touted bantamweight newcomer Manny Bermudez kept his perfect record intact in the opener, as he submitted Albert Morales in the first round.

Morales’ first right hand briefly rattled Bermudez as the bout opened, prompting him to take the fight to the mat. There, Bermudez went to work immediately, sinking in a triangle choke, but Morales took his time and got free. The New Englander kept working, though, ultimately moving into the top position before the two stood with less than a minute left. They didn’t stay there long, with Morales getting the fight back to the mat seconds later.

In the second, Morales’ striking looked to be pushing him into the lead, but as the two locked up on the feet, Bermudez sunk in a guillotine choke and the end came moments later as the fighters went to the canvas. The time of the tap out was 2:33 of round two.