"It’s important for me to always leave it all in the ring and fight my
hardest and I do like to put on a good show for the crowd." - Keith Wisniewski 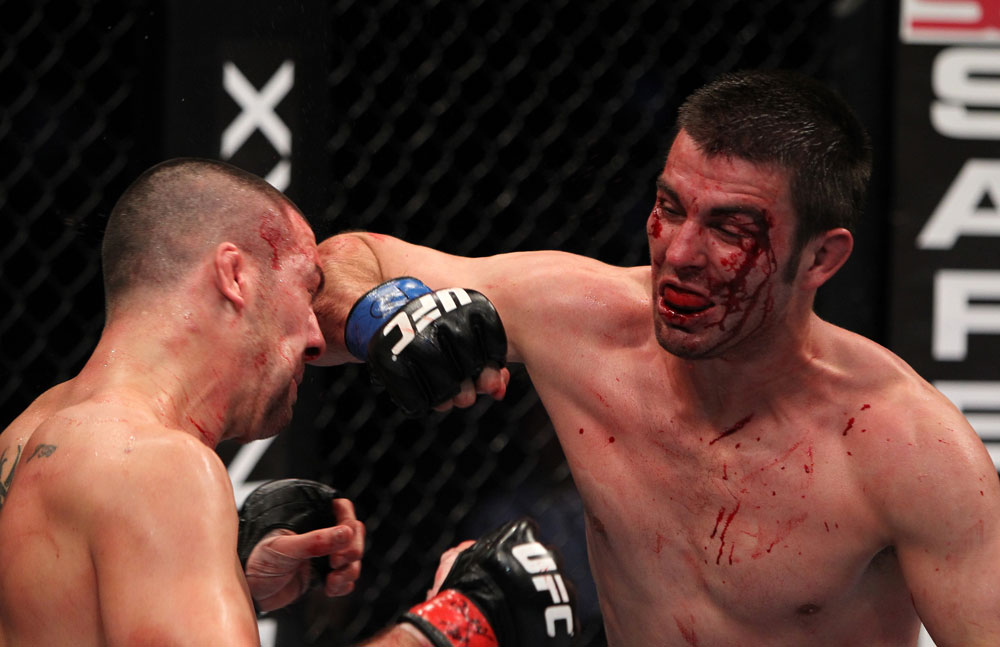 Longtime welterweight standout Josh Neer has always been a man of few words. But when asked earlier this year about the 10 minutes of hell he got from Keith Wisniewski before scoring a second round TKO win, Neer was downright effusive in his praise of his foe.

“Some of the shots I hit him with, I thought he was done, but then he just kept coming,” said Neer. “He was like the Terminator.”

If you didn’t see the bout held in this nation’s capital last October, you missed out on a good ol’ Midwest brawl, complete with two vets trading shot after shot at close range until Wisniewski’s face decided it had enough, forcing a doctor’s stoppage due to cuts.

“I’m pretty effective in there,” said Wisniewski. “I have pretty heavy hands, especially body shots, knees and stuff, and I felt like I was gonna get the better of him, although through two rounds obviously that hadn’t come to pass. But in my head, I was eventually gonna be able to turn the corner that way and it just never happened.

“To be honest, he didn’t hit me with a lot of power shots in that fight, just a lot of cumulative shots,” he continues. “He was scoring a lot with his elbows. None of them were the type of shots that kinda rattle your head and give you a concussion, but they were damaging and scoring. I was never really dazed in that fight, but my face was kind of a mess.”

When it was over, the Indiana native may have put a 12th loss on his 28-12-1 record, but he didn’t disappoint anyone in the Verizon Center except himself.

“It’s important for me to always leave it all in the ring and fight my hardest and I do like to put on a good show for the crowd,” he said. “In that sense, I’m definitely happy that we put on what I felt was a pretty good fight, going back to watch it. But obviously the ultimate goal is winning; there’s really no consolation prize.”

It’s a veteran way of looking at things, a no-nonsense attitude built over 14 years in the pro ranks, and Wisniewski, in the midst of his second run in the UFC, knows better than most what each loss costs and how it feels to finally get a return call to the Octagon after a nearly six year wait.

“I’m extremely happy with where I’m at and I think I’ve paid about as many dues as anyone to get there, so I guess I appreciate what I have right now,” said the 30-year old, whose UFC 56 decision loss to Nick Thompson in November of 2005 kicked off a five fight skid which would have tested the resolve of any fighter.

“It was definitely a frustrating period for me,” he said. “I don’t think I trained as hard as I am now. It was kind of a period where I was working a lot, I had a lot going on at home, and I don’t think my focus was quite where it needed to be. But in all fairness, I think if people go back and watch those fights, especially the (Jorge) Masvidal fight, I’m pretty sure I won that fight. I would say that 90 percent of the people who watched that fight would agree, and three of the other losses easily could have went my way. The (Rory) Markham fight could have went my way, and I would say the fight that most likely I lost was the (Erik) Oganov fight. But I could have easily won all four of those fights if you go back and watch the tapes. They were all very competitive.”

After the Thompson fight, Wisniewski lost a majority decision to current Strikeforce contender Masvidal, lost via TKO to UFC vet Markham when he couldn’t come out for a tiebreaking fourth round, and dropped a pair of split decisions to Oganov and UFC vet Carlos Prater. Losing is one thing, being inches away from victory is another.

“That’s one of the drawbacks,” said Wisniewski of the fighter’s life. “Any fighter that comes out with a loss, they wish that they could fight the next weekend to shake that loss off. It puts a huge amount of pressure on you every single time you get in the ring and I’m sure other athletes feel that. Even a sport like baseball, where you have a 162 game season, I’m sure every time they go out there they’re feeling the pressure to win too. But in a sport where you only fight a couple times a year and maybe 10 times in your whole career, every fight becomes very important.”

Beginning in 2008 though, Wisniewski got back on track and began a six fight winning streak that included victories over UFC vets Pete Spratt and Chris Wilson, earning him a call back to the Octagon. But in his typical self-effacing fashion, the Hobart resident isn’t about to claim that he’s figured this game out.

“Every fight’s different, and every opponent’s different, so a lot of that, especially some of those earlier fights in that win streak, weren’t quite as high level,” he said. “No offense to those guys, because they were tough, but they weren’t UFC level guys. Only the last couple guys on that win streak were really, really solid. I felt good going into the Neer fight, and I anticipated winning that fight, but as far as figuring it out, I guess I’m still working on that.”

And he’s working on it with the same team he’s been with throughout his career, the Duneland Vale Tudo Fight Team that includes his brother Justin. Seeing anyone with the same team for that long, especially these days, is the exception rather than the rule, but to him, it’s a no brainer.

“I think beyond anything else, there’s a certain brotherhood and camaraderie with being part of a team,” said Wisniewski. “Me and my brothers were co-founders of the gym, so I really like having him in my corner for every fight, and that’s very important to me. And even some of the guys that have been there six, seven, eight years, those guys are like my brothers, and it’s hard to just uproot and move somewhere else and try and find that again.”

But the six fight winning streak and the stellar effort against Neer show that Wisniewski’s apparently turned the corner in his career, something that should help him get back in the win column this Saturday night in a UFC 145 prelim bout against Canadian newcomer Chris Clements.

“He seems very aggressive, getting in there and trading a punch to give a punch,” said Wisniewski of Clements. “He’s got pretty heavy hands and kinda mixes up his combos with kicks and punches. He typically presses forward, and I see it as a tough fight and a pretty difficult challenge. I definitely think he’s gonna try to take the fight to me.”

For some, that would be a cause for concern. For Keith Wisniewski, it’s just another day at the office. But don’t call it work.

“I really enjoy the sport, I enjoy the competition, and even more than competing, I really enjoy training and being at the gym with the guys getting ready for a fight,” he said. “It’s not a labor for me, it’s something I enjoy.”