Keeping It Real With Ratner

Marc Ratner is the UFC Senior Vice President of Regulatory Affairs and has been a mainstay of the regulatory and officiating side of sports in Nevada for more than 40 years.  One of the most colorful figures in the world of sports, the former executive director of the Nevada State Athletic Commission helped formulate what are now the Unified Rules of Mixed Martial Arts in 2000, paving the way for UFC and MMA sanctioning in Nevada, 48 other states across America as well as across the globe.

When Ratner joined the UFC formally in 2006, he helped expand the sport from 22 states to 40 in three years. A former NCAA Division I football official for more than 20 years, Ratner also has been the shot clock operator at University of Nevada, Las Vegas basketball games since 1983.

Want to know what’s real and what’s not when it comes to the rules and safety measures of UFC worldwide? Nobody knows about that more than Marc Ratner.

So what’s real this week? Ratner sat down with UFC.com Editor in Chief Nancy Gay for an update: 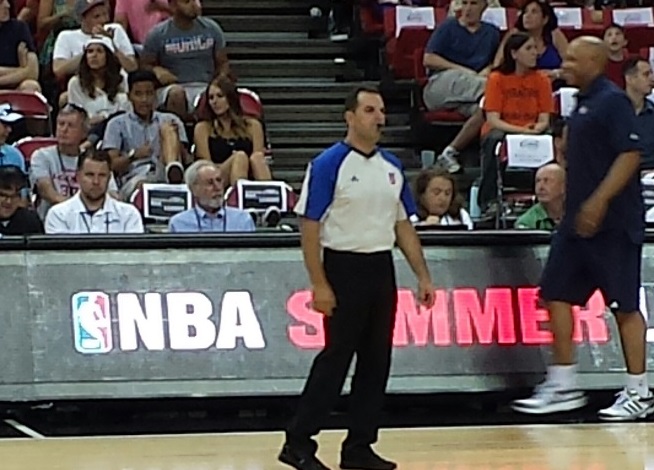 UFC.com: “We saw you were front and center on the sideline tables at the NBA Summer League games on Saturday. What were you up to there?”

Ratner: “I wasn’t on press row. I was running the clock. I did four games on Saturday – Atlanta and the Wizards was one of them. I love it.”

UFC.com: “So you like to keep your hand in officiating sports other than UFC?”

Ratner: “I’ve been very blessed in my background as an official in many sports. I was Mountain West, WAC – I go all the way back – so I did about 20 years of Division I football, refereeing. And I’m the commissioner of high school officials here, so I have about 52 schools under my purview.”

UFC.com: “What are your responsibilities with that?”

Ratner: “I make sure there are officials at every game, for all high school sports. I have lieutenants in every sport. But when a mother gets mad, they still call me and say, ‘Why did you throw my son out of the game for too many fouls?’

UFC.com: “You’ve got a busy week coming up, especially with UFC Fight Night: Cerrone vs. Miller on Wednesday (Revel Casino, Atlantic City, N.J., live on FOX Sports 1 9 p.m. ET/6 p.m. PT). Tell us what you’re working on with that.”

Ratner: “Well, I’m going to Atlantic City on Tuesday and having dinner with the New Jersey Athletic Control Board. Then on Wednesday I’ll go to the fights and monitor them.”

UFC.com: “What is involved with monitoring the live events from a regulatory standpoint? The individual state sanctioning bodies in the U.S. select the officials.  What are you looking for specifically?”

Ratner: “I’ll have a bout sheet, and I’ll have all the officials listed. And I’ll make little notes. Things like, ‘Oh, this referee, I hadn’t seen him before but he did a good job …  I’m making notes for myself, and I have files in my desk here for every fight in the last 10 years. So I can look back and say, “Gee, the last time we were in Boston this guy did pretty good; maybe (Massachusetts) should use him again.’”

UFC.com: “When you meet with a regulatory commission, what do you discuss with them?”

Ratner: “Well, with New Jersey, that’s a very experienced commission. Now, if it’s the first time we’ve been somewhere – like in Maine, I would get much more involved (in clarifying rules and regulations) because they’ve never had a big fight before. But in New Jersey, in Texas and in California, where they have commissions with a lot of experience in the sport, I don’t have to do as much.”

UFC.com: “After that, you’ve got an interesting trip on tap.”

Ratner: “I’m going to Puerto Rico to meet with the athletic commission and some government officials there, because we do want to fight there sometime in 2015 (in San Juan). And this will be setting it up. Making sure they use the Unified Rules.”

UFC.com: “Are there a lot of UFC fans in Puerto Rico?”

Ratner: “It’s a big boxing country, no question there. I think it’s a natural place for UFC. I think we have to get more fighters there. One of our champions, Anthony Pettis, is from Puerto Rico. So they know about combat sports. Obviously, we need to do more pay-per-view work there and more television work there. But I think if we bring a show there, we’ll do great.”